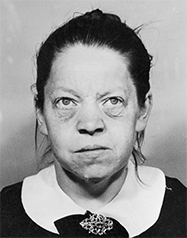 Gertrud Clara Edith Becker was born in Hamburg on July 31, 1895, the youngest of eight children. She was baptized Evangelical Lutheran. The parents, the merchant Carl Johann Julius (also: Carlos Juan Julio) Becker and his wife Agathe, née Schmitz, born on May 16, 1855 in Hamburg, had married on May 26, 1881 in Caracas, Venezuela. The husband is believed to have died during World War I. We do not know his date of birth, place of birth, date of death, or cause of death.

The oldest of the eight children, Enriqueta Luise Agata, had been born in Caracas on May 6, 1882. At the time of her marriage in 1905 in Hamburg to the merchant Jürgen Nagel, her father lived in Caracas and her mother in Hamburg.

The second born child, Kurt, whose birth data we do not know, is said to have lived later as a merchant in America.

Children Hans and Ella each reportedly died of influenza at age seven and six months, respectively.
Paul, the sixth of the Becker children, is said to have perished in World War I.
Johann Carl Benno, born in Hamburg on June 15, 1891, lost his life on January 20, 1943, probably as a combatant in Metz.

The family lived in Hamburg-Harvestehude, Mittelweg 57, for several years around 1895, temporarily moving to Caracas, as indicated by the birthplaces of the children. Gertrud Becker also lived in Venezuela for a certain time. We do not know exact dates.

From this age on, Gertrud Becker lived in Venezuela. She gained a lot of weight there and became conspicuously corpulent. The girl was not as lively as other children of that age, but was said to be "clean" at the age of two. In 1899 - Gertrud was now four years old - the family is said to have settled back in Hamburg. (In the Hamburg address book from that time, however, corresponding entries could not be found). A doctor in Hamburg attributed Gertrud Becker's corpulence to her stay in the tropics. Gertrud was described as cheerful, but retarded in her development. Because the girl was "handicapped in her ability to speak," she received home schooling until 1914. A resident physician had diagnosed her with "mongolism" (trisomy 21). However, this diagnosis was not mentioned later. In contrast, the institution's physician, SA member Gerhard Kreyenberg, told the Hamburg welfare authorities in 1938 that Gertrud Becker suffered from "cretinism with imbecility".

From 1914, Agathe Becker lived with Gertrud at the home of her daughter Enriqueta Luise Agata Nagel, who was married to the owner of an alcohol factory. The family lived in a villa in Groß Flottbek in economically good circumstances until 1927. When the company was then placed "under supervision" (presumably meaning receivership) as a result of the sharp decline in business, the villa had to be sold. The family had to restrict themselves and rented a small four-room apartment in which there was no room for Agathe and Gertrud Becker. They now moved in with one of the married sisters in the Senator Erich Soltow Stift at Braamkamp 42 in Winterhude.

Agathe Becker, now 75 years old in 1930, was worried about Gertrud's future should she pass away. She presented Gertrud to the welfare authorities with the aim of having her admitted to the Alsterdorfer Anstalten (now the Evangelische Stiftung Alsterdorf). However, on July 30, 1930, Gertrud Becker was initially admitted to the Friedrichsberg State Hospital for observation.

The institution made the following statement to Gertrud's mother: "Your daughter, Miss Gertrud Becker, suffers from an imbecility with a tendency to mild states of agitation, which is due to an underdevelopment of the thyroid gland existing from early childhood. Her daughter can remain in the local institution without further ado; however, she is also considered suitable for a corresponding department of the Alsterdorf institutions, which will result in lower costs for her accommodation. Certainly, the sick person is not capable of keeping and worrying on her own outside in life." (Feeble-mindedness was the term used to describe a reduction in intelligence or congenital weakness of intelligence. The term is no longer used.)

On February 4, 1931, Gertrud Becker was admitted to the Alsterdorf Institutions. She weighed 68 kg at the time of her admission. It is noted in her patient file that she was well oriented in time and place at the time of her admission, knew her personal data and the seasons, could distinguish between the Catholic and Protestant denominations, and could solve simple tasks involving basic arithmetic.

Gertrud Becker suffered from severe homesickness in Alsterdorf. According to the records, she behaved quietly and kindly, but did not participate in the life of the institution and refused to go to church, saying: "I'm not up for that sort of thing, I'm not used to it." In June, she had become more trusting and played a few songs on her forest zither.

In 1932 and 1933, Gertrud Becker continued to be described as friendly. She would give no cause for rebuke, was kept busy with light housework, and darned stockings. She is said to have continued to show no interest in socializing.

In September 1933, the Hamburg Welfare Authority determined that Gertrud Becker was to be transferred to the State Welfare Institutions. The Alsterdorf institutions urged that Gertrud remain in Alsterdorf: "The very worried mother knows that she is well cared for here and is happy to know that she is here. A transfer to the nursing home would mean great hardship, especially for her mother, who used to live in very good circumstances and had to go through a lot of grief. Since we cannot bring ourselves to do this, we declare ourselves willing, if the authorities cannot, to make a sacrifice on our part and to feed Gertrud Becker from now on at a rate of RM 1 per day, although this does not cover our own costs." Gertrud Becker remained in Alsterdorf.

In 1934, the tone of the file entries changed. Gertrud Becker was now described - as in the following years - as quarrelsome and as unfriendly towards her fellow patients, from whom she had kept herself separate.

Her mother often asked for permission to visit. Her sister Enriqueta Luise Agata, who called herself Luisita, was also concerned about Gertrud Becker.

Agathe Becker died on March 27, 1943, having last lived with her daughter Luisita at Pilatuspool 3.

During the heavy air raids on Hamburg at the end of July/beginning of August 1943 ("Operation Gomorrha"), the Alsterdorf institutions also suffered bomb damage. The director of the institution, SA member Pastor Friedrich Lensch, took the opportunity, after consulting with the health authorities, to transfer some of the residents who were considered "weak in labor, in need of care or particularly difficult" to other sanatoriums and nursing homes. On August 16, 1943, a transport with 228 women and girls from Alsterdorf and 72 girls and women from the Langenhorn sanatorium and nursing home left for Vienna to the "Wagner von Jauregg Sanatorium and Nursing Home of the City of Vienna" (also known as the "Am Steinhof" institution). Among them was Gertrud Becker.

While Gertrud Becker was still "doing quite well" in June 1944, her health assessment changed dramatically in September 1944. "Suffering from severe diarrhea, patient rapidly deteriorating."
A short time later, Gertrud Becker died on September 15, 1944, allegedly of gastroenteritis (inflammation of the stomach and intestines).

When Luisita Nagel asked to be informed of the circumstances under which her sister had died, she received the following reply: "Your sister Gertrud Becker died very quickly of an acute infectious intestinal disease. She was bedridden for only a few days. Her birthday cake still brought her joy. She was not troubled by air raids. The patient's property will be sent to you. Yours sincerely. Dr. Wunderer".

The asylum in Vienna had been an intermediate facility for the Hartheim killing center near Linz during "Aktion-T4" (a camouflage term for the Nazis' "euthanasia" program, so named after the location of the Berlin euthanasia headquarters at Tiergartenstraße 4). After the official end of the killings in the killing centers in August 1941, mass murder continued in the previous intermediate institutions, including the Vienna institution itself: by overdosing on medication, by not treating illnesses, but above all by depriving the patients of food. This can also be seen in the fate of the female patients in Hamburg. Of the 228 girls and women from Alsterdorf, 196 died, and of the 72 girls and women from Langenhorn, 61 perished. Gertrud Becker was one of them.