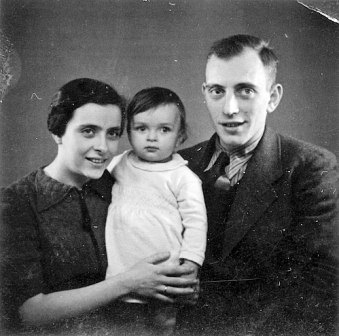 Kurt Bielefeld was the only child of the electrician Alfred Bielefeld and his wife Helene, née Cohn. They got married in 1911, two years before Kurts birth. In the mid-1930s, Kurt met Marion Siemon, who was five years his junior. She was the daughter of Leo and Sippora Siemon, née Lazarus. In the summer of 1936, Kurt and Marion got engaged, expressing their joy about the event by placing an ad in the Hamburger Familienblatt für die israelitischen Gemeinden Hamburg, Altona, Wandsbek und Harburg, a free copy of which went to all members of the religious community. At the time, both lived at Kleiner Schäferkamp 33. One year later, they got married and moved to Wrangelstraße 32.

Their daughter Hella was born on 9 Mar. 1938. Despite increasing exclusion, deprivation of rights, and persecution of Jews in Germany, Kurt Bielefeld could not imagine at that time that his family would run into danger. After all, his father had fought for the German Reich in World War I and had been decorated with the Iron Cross. However, during the night of 9 to 10 Nov. 1938, the Gestapo arrested Kurt Bielefeld, transporting him to the Sachsenhausen concentration camp. After his release, he tried all he could to get himself and his family to safety. At the end of Aug. 1939, he filed an application with the foreign currency office at the Chief Finance Administrator (Oberfinanzpräsident) for taking along moving goods to emigrate to New York. He submitted extensive lists of all things the family wanted to take with them, including tools, his wifes bridal wreath, and one "diary (child), which had been presented to them as a gift on Hellas birth. However, it was not possible to realize the plans. In mid-October 1939 and again in late Jan. 1940, Kurt Bielefeld informed the currency office that he could "not do anything at this time to emigrate. By then, the family had already been forced to leave the apartment on Wrangelstraße and move to the "Jews house ("Judenhaus) at Grindelallee 23.

On 10 Mar. 1941, Kurt and Marion Bielefeld had their second daughter, Mathel. Half a year later, the family received the notification for "evacuation. Together with Kurt Bielefelds parents, who had been sent to the "Jews house on Bundesstraße 43, and Marion Bielefelds mother, Sippora Siemon, who lived at the "Jews house at Rutschbahn 25a, they were deported to Minsk on 18 Nov. 1941. At that time, Hella Bielefeld was three years old, her sister Mathel just half a year. No member of the family survived.

I spent the first five years of my life in Hamburg-Eppendorf, living in the house at Erikastraße 90. After a lengthy period of unemployment, my father had opened a tiny fish store there. While my father went (initially by bicycle) to buy the goods at the Altona Fish Market, my mother ran the show at the store.

Opposite our place, at Erikastraße 79, Mr. Alfred Bielefeld managed a small electrical store. My father became friends with his son because of a shared hobby: motorcycling. I was not aware of the fact that the Bielefelds were Jews. This was not a topic conversation in our family. Only when the persecution of the Jews began, did my parents let me in on it. I remember Alfred Bielefeld very well, whereas his wife Helene did not appear in the store, probably concentrating entirely on her housework. For this reason, I came across her only rarely, and I have only a very vague recollection of her.

In Dec. 1936, my father bought a larger store, and so we moved to Alsterdorfer Straße in Winterhude. After that, I lost sight of the family somewhat, but my parents continued to be friends with Kurt Bielefeld. Initially, Kurt had a non-Jewish girlfriend, though he was forced to split up with her because of so-called "racial defilement ("Rassenschande).

He later met Marion Siemon whom he eventually married. Marion was a really pretty young woman, and my parents grew very fond of her, too.

In early 1938, their daughter Hella was born. At that time, they lived in a ground-floor apartment at Wrangelstraße 32. My parents related with utter dismay that tenants from the upper floors had tried to throw a flowerpot at the baby carriage sitting in the backyard. This incredible event opened our eyes to the extent that hatred of the Jews had already reached, with even little babies subjected to it. Mar. 1941 saw the birth of the second daughter, Mathel. I saw little Hella occasionally as a baby but unfortunately, I never had a chance to see Mathel.

My parents told me that Kurt himself voted for the Nazis and thus for Hitler. He could not imagine that Jews were in such danger, since, after all, his father had fought for Germany in the First World War and had been decorated with the Iron Cross. He did not take the opportunity to join relatives of his wife, who had barges in the Hamburg Harbor, and use them to emigrate to England. They simply felt they were Germans.

Following the murder of the German Ambassador vom Rath and the subsequent November Pogrom ("Reichskristallnacht in Nov. 1938), our friend was arrested at his home and transported together with other Jewish men, probably to Sachsenhausen. There they were forced to spend one day and one night standing on a barrack square before being allowed to return home. He literally told my parents afterward: "The men collapsed like flies. He was so shocked that he implored my father, "Join whatever you can join! Consequently, my father became a member of the German Labor Front (Deutsche Arbeitsfront  DAF).

Since Sept. 1941, all Jews were forced to wear a yellow "Jews star ("Davidstern), visible to the eye and showing "Jew ("Jude) as an inscription. Of course, this made it even more dangerous to maintain private contact. I remember very well the face of Mr. Bielefeld as he walked by waiting customers through the store and into our living quarters. Unfortunately, our apartment did not have a separate entrance, which meant that every visitor had to go through our store. My parents would slip him a package with fish products, since by then Jews barely had any means of getting a hold of food any more.

Only in retrospect, I realized just how dangerous these visits were. How easy it would have been for one of our customers to become suspicious, because of the coat collar buttoned high, that perhaps some Jew wanted to hide his "Jews star. After all, denunciations were the order of the day. Therefore, my parents repeatedly implored me not to tell anyone about our Jewish friends. Back then, I felt surrounded just by Nazis. Only long after the war did I talk to my friends from school about it, and I was surprised to learn that in other families, too, it was forbidden to disclose anything about their disapproval of the Nazi regime.

When Kurt Bielefelds family received their deportation order in the fall of 1941, they switched in strictest secrecy their quilts with those of my parents. The Bielefelds wanted to take along our thick woolen quilts while we received their silk quilts. Kurt clung to the "hope that they would be able to begin a new life in Siberia, their supposed destination. For this reason, he also packed all of his tools, and the like.

Since the deportation, we have asked ourselves many times what horrible fate may have befallen our friends. Only by way of contact to the "Stolpersteine initiative did we learn that all of the members of the Bielefeld family were deported to Minsk in Nov. 1941 and murdered there. (see also the book by D. J. Goldhagen, Hitlers Willing Executioners: mass execution of 19,000 Jews in Minsk in Nov. 1941).

The Bielefelds left in our trusted hands their most valuable possession: beautiful, solid silver cutlery (18 pieces) and a table lamp whose base made of Meissen china was decorated with a group of dancing children. My mother actually wanted to hand the lamp over to the Museum of Arts and Crafts (Museum für Kunst und Gewerbe) but we learned that the storerooms there were full to the brim. As a result, my niece received this last memento of the Kurt Bielefeld family.

For my family, Kurt and Annaliese Oeljeschlager, it went in fact without saying not to leave their Jewish friends in the lurch. However, it was my mother in particular who repeatedly mentioned that these incredible crimes, this genocide, would not be forgotten, not in a hundred years. It was for this reason that prior to her death (in 1996), she donated a tree in Israel. This memory has truly been accompanying me since I was a child, becoming almost the traumatic theme of life for me. Therefore, I was really relieved that with the help of Mr. Hess, "Stolpersteine were laid by the artist Gunter Demnig for the entire Bielefeld family, that is, for Alfred, Helene, Kurt, Marion, Hella, and Mathel.

They did not get any graves on which to place a stone according to Jewish tradition as a sign that they have not been forgotten. Now this person or that will hopefully "stumble over the stones.

This year, I will turn 77 years old, and I am grateful for having brought to light this memory, which has never left me for as long as I live.