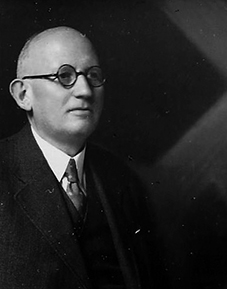 "By the happy birth of a strong boy Philipp Blankenheim [!] and wife were highly pleased." With this advertisement in the "Echo der Gegenwart" the Aachen merchant Philipp Blankenstein (1834-1894) announced the birth of his third son Adolf. With his wife Julia, née Waldheim (1843-1918), a native of Hamburg, he had five children: Maximilian (born 1867), Anna Henriette (born 1868), Felix (born 1870), Adolf (born 1872) and Robert. At the birth of the latter in 1874, it was then announced "Instead of a special announcement: Another boy!".

Nothing is known about Adolf Blankenstein's childhood and youth, but he probably also completed a commercial apprenticeship. At the age of 24 - in 1896 - he moved to Hamburg to join the business of his uncle Leo Henry Waldheim. The latter owned an import and export company for hardware, chemicals and oils and was a brother of Adolf's mother Julia. In the early years, Adolf lived with his uncle at the home of his grandmother Sophie Waldheim until 1900, when he moved in with his aunt Ida Wagner, née Waldheim, a sister of his mother. She had a daughter named Alice, Adolf's cousin. She lived with him in the household until she married Emil Hammerschlag in 1919 (see www.stolpersteine-hamburg.de Alice and Emil Hammerschlag).

Leo Henry Waldheim supported his sister Ida Wagner (1861-1936) financially and also paid for his mother Sophie Waldheim's household expenses. Adolf became co-owner of the business and continued it alone after Henry's death in 1910, also taking over the financial care of the relatives.

After the First World War, the company went bankrupt. Alice Hammerschlag's daughter Hilde, born in 1921, recalls that in the 1920s and early 1930s Adolf worked as an agent for the Lake Constance-based company Allweiler Pumpen in northern and western Germany. He serviced and sold the first electric pumps on farms in Schleswig Holstein. He often took Hilde with him on these trips. She thinks back fondly and loved her "Uncle Adolf," who was not married, very much. He took care of her like a father, and even today, in the spring of 2021, there is a photo of him on her bedroom dresser.

Adolf Blankenstein lived in the same block on Sierichstraße as Alice and Emil Hammerschlag and was considered the head of the family. The bond was close, and Adolf a caring and generous man. When Alice and Emil Hammerschlag could no longer afford the rent for their apartment, he took in the small family after the death of Ida Wagner and also supported them financially.

Adolf Blankenstein's cousin Violet Roditi Waldheim lived in England. Adolf and Alice Hammerschlag worked together to find a way for Alice's daughter Hilde to leave the country and also asked Violet for help. Hilde finally reached England in January 1939 with a Kindertransport.

When Adolf's nephew Alfred Blankenstein, son of his brother Max, was arrested in the German-occupied Netherlands in the summer of 1940 and transferred to the prison in Aachen, he immediately inquired about a possibility to visit him there.

In December 1940, the monthly budget allotted to him was only 300 RM (Reichsmark), he requested an additional 100 RM "for Christmas presents." The sum was approved. On the form is the addition "This approval does not authorize payment of travel expenses and does not authorize remittances to Holland." This suggests that he also tried to help his relatives who had fled to the Netherlands with monetary donations.

As a member and temporary chairman of the Hamburg Stadtclub von 1910 e.V., which had its clubhouse in the Hamburger Hof on Jungfernstieg, Adolf Blankenstein pursued his passion for playing skat and bridge. According to Hilde's recollection, the musician and composer Richard Strauss and the surgeon Ernst Ferdinand Sauerbruch were among his playing partners. Thanks to this connection, Sauerbruch is said to have saved Violet Roditi's son's life by performing an operation in 1938.

Adolf Blankenstein and Emil Hammerschlag jointly owned a rented residential property on the corner of Fuhlentwiete and ABC-Straße. In August 1939 they had to sell it. The buyer took over the debts on the property according to the purchase contract. After deducting various fees, the proceeds of the sale amounted to about 7000 RM. The sum was transferred to a joint blocked account of the two men. Since February 1940, Adolf Blankenstein and Emil Hammerschlag were subject to a "security order". From now on, they were no longer allowed to dispose freely of their property, but were granted a fixed sum for their monthly living expenses. Special expenses had to be applied for separately.

At this time, Adolf Blankenstein still had a "fortune" of about 6000 RM. He stated his monthly expenses as 305 RM, and was granted 300 RM. The Dresdner Bank set up a "restricted security account" for him. Adolf had to send forms by registered mail stating that payments to him could only be made to this account and "that cash payments to me or in my favor to third parties are no longer permitted. The Foreign Exchange Office has advised me that violations are punishable by severe imprisonment and fines," the form reads. These letters were sent, among others, to Emil Hammerschlag, who paid half of the apartment rent, to the Hamburger Sparcasse von 1827, to the Grundstücksverwaltung von 1938 (Property Management from 1938), which was involved in the sale of the Fuhlentwiete property, to the Gotthard Allweiler company in Radolfzell, and to Julius Neuhaus.

The latter had moved into the apartment with his wife Marie as a subtenant. In August 1940, Adolf Blankenstein wrote to the housing care office because he had given notice to the couple, but they made no effort to move out. Apparently there had been a conflict between Alice Hammerschlag and Marie Neuhaus, since the latter "never sufficiently fulfilled her duty to help keep the parts of the apartment used by her clean, thus forcing Mrs. Hammerschlag to take on the cleaning of the common parts of the apartment, such as the hallway, kitchen and bathroom, as well as the toilet used by Mr. and Mrs. Neuhaus alone." Mr. and Mrs. Neuhaus remained in the apartment until their deportation.

The letter to the housing care office reveals what Hilde also reported: Adolf Blankenstein was seriously ill and "[required] the care and attention of my relatives." He suffered from gout and was almost paralyzed in his hands and feet; another document mentions open wounds. (Gout is a metabolic disorder in which elevated levels of uric acid in the blood cause inflammation and severe pain in a variety of joints in the body. Men are mainly affected by the disease).

Between June 1940 and August 1942, Adolf Blankenstein submitted monthly applications to the foreign exchange office to be granted the use of an additional 30 RM for massages against his pain. In August 1940 he was approved 300 RM for a bathing cure in Wiesbaden, as well as another 150 RM in October 1940, since he had to extend it. He found accommodation in Wiesbaden with his niece Lilly Baruch-Blankenstein at Sonnenberger Str. 22.

Alice and Emil Hammerschlag were deported to Minsk on November 8, 1941. Marie and Julius Neuhaus were also in this transport. Who subsequently took care of the 69-year-old man remains unclear.

Adolf Blankenstein had to leave his home of many years in Sierichstraße at the beginning of 1942. He lived for a short time as a subtenant in Haynstraße, then in early April he gave the address Sonninstraße 14 in Altona on the application for massage costs, the headquarters of the Salomon Joseph and Marianne Hertz Foundation. Promptly he was informed with the permission: "Every change of apartment is to be communicated to me immediately under indication of the new rent!" Since this amounted to 15 RM monthly "excl. heating & warm water electr. Light", a reduction of his "allowance" to 250 RM per month followed.

In September 1942 Adolf Blankenstein was forced to move once again. At Beneckestraße 6, a building of the Jewish community, which had been converted into a "Judenhaus", he received the deportation order for the Theresienstadt ghetto five months later. The seriously ill man survived the conditions there for only four weeks. He died on March 28, 1943.

The fate of Adolf Blankenstein's siblings should also be acknowledged here:
His oldest brother Max Blankenstein, married to Gertrud (Trudi), born in 1872, née Jacoby, was also a merchant by profession. The couple had three children: Erna, born in 1897, Alfred, born in 1901, and Heinz, born in 1911. Alfred earned a doctorate in chemistry in Frankfurt. Before moving to Arnhem in the Netherlands in November 1934, he lived in Paris. Erna was a master tailor by trade and emigrated to Zevenaar in the Netherlands in September 1935, where she worked as a housekeeper. In February 1937 she joined her brother in Arnhem, and in March 1939 Max and Trudi followed their children. All four lived in a shared apartment.

The younger son, Heinz Blankenstein, was a commercial assistant by trade and took his own life in Aachen in 1929 at the age of 18. His grave is in the Jewish cemetery in Lütticher Straße. According to Hilde's recollections, both sons were highly intelligent.

Since December 11, 1942, Max, Trudi, Alfred and Erna Blankenstein were imprisoned in the Dutch collection camp Westerbork. Max and Trudi were deported to Auschwitz on January 11, 1943, Erna and Alfred on February 16, 1943. None of them survived.

Anna Henriette Blankenstein, Alfred's only sister, had married the merchant Hermann Marx from Wetzlar in Aachen in 1895. In March 1920 she lived widowed in (Berlin) Charlottenburg. Further information is not known to us.

The brother Felix Blankenstein was also a merchant by profession and married Regina, née Herz (born 1870). She worked as an authorized signatory in the company Ph. Blankenstein. The couple had a daughter, Lilly, born on August 29, 1897 in Aachen. Felix Blankenstein died in Aachen in 1925, his wife in 1935.

Lilly Baruch-Blankenstein was deported to the Theresienstadt ghetto on September 1, 1942, together with her husband Ludwig, born December 12, 1892. Ludwig Baruch died there on November 2, 1943. Lilly survived the concentration camps Auschwitz, Neuengamme and Bergen-Belsen. After liberation, the Swedish Red Cross brought her to Sweden as part of the so-called "Graf Bernadotte Aktion." She returned to Wiesbaden in 1951 and died in Aachen in 1982.

Robert Blankenstein, Adolf Blankenstein's younger brother, died in Aachen on January 11, 1910. His grave is in the Jewish Cemetery in Lütticher Straße.

The last word belongs to Hilde's daughter, who wrote to the author: "It's so nice to see Adolf being brought back to life. He was a good person. If he hadn't helped get Mom out of Germany, I wouldn't be writing this e-mail to you today."