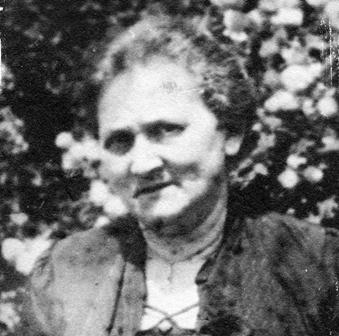 Emil Blanck died in 1931. At the time, both daughters had completed their schooling at the convent school (Klosterschule) in Hamburg, with Carmen successful in her profession as a medical-technical assistant and temporarily running her own chemical laboratory that earned her much recognition. She emigrated to Britain in 1936, appearing as an actress there in smaller stage parts.

Her sister Rose Lotte initially aspired to qualify as a social worker, and then began studies with the aim of becoming an elementary school teacher at the University of Hamburg in 1930, though dropping out of university when her father died. Subsequently, she completed a course in stenography but was not admitted to the exam for "racial reasons. She then earned her money as a domestic, among other things. In 1933, she gave birth to a son in Altona. Only in 1939 was she able to marry the boys father in England, where she had emigrated with the child in the fall of 1937. There she worked in the boarding house owned by her sister Carmens parents-in-law.
After the emigration of her younger daughter, Agathe Blanck gave up the spacious apartment on Eppendorfer Landstraße, initially moving with her older daughter and her daughters son to Grossheidestraße and later, when the second daughter had emigrated as well, living with Anita Coutinho, a cousin, in Isestraße.
She received a regular small income from her fathers inheritance, which was one of the reasons for her turning down the offer to emigrate to Britain as well.

As the daughters declared in the restitution proceedings, they had "the naïve idea of being able to have their mother join them in Britain in a year or two. At least they had written contact with their mother until 1941, indirectly via Denmark and the USA. As a result, they knew that their mother maintained connections to old friends right up to the deportation. Agathe Blanck was only on the reserve list for the deportation, perhaps going "voluntarily to Lodz together with her cousin Anita Coutinho. Via a cousin in Denmark, news reached Hamburg from Lodz in late Nov. 1941 that Agathe Blanck was quartered there on Mühlgasse, probably together with Anita Coutinho. We do not know when she perished there.

Anita Coutinho belonged to the same Portuguese-Jewish family as Agathe Blanck. Her parents were Joseph Coutinho and his wife Lea, née Rocomora. Unfortunately, nothing is known to us about Anita Coutinhos life beyond the basic dates. The deportation list indicates "domestic as her occupation. She died in Lodz on 29 Apr. 1942.