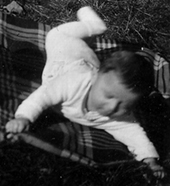 Selmas father Meyer Löwenthal acquired a house in Duderstadt in 1880 at Spiegelbrücke 344; he opened an iron wares dealership there. He was very successful, as can be deduced from his high tax assessment from the year 1900. In 1915, a fire destroyed an entire quarter of the city of Duderstadt, including the Löwenthals house. A new structure with the house number 10 was built in 1925. Meyer Löwenthal died on 16 February 1927. His son Max remained bound to his fathers occupation. He opened an iron wares dealership at Duderstädter Marktstrasse 9.

Perhaps, Selma and her siblings attended the Jewish elementary school established in Duderstadt in 1872. It is not ascertainable that Selma received vocational training. Her younger sister Meta attended a cloister school for two years and then a higher girls school. She received commercial training.

On 13 July 1897 in Duderstadt, Selma married the Lübeck businessman Siegmund Bleiweiss (b. 2.1.1869). His parents were the cobbler Hermann Hirsch Bleiweiss and Hannchen, née Cohn. In 1873, they lived in Lübeck at Untere Johannisstrasse 35.

Shortly after the marriage, the couple opened a furniture shop in Neumünster. There also were born their seven children. Between 1898 and 1907, four sons and three daughters came into the world. The family were among the few resident Jews (in 1905 the Jewish Congregation in Neumünster numbered 28 people). They conducted an open and hospitable home. "A sense of duty, self-discipline, and pleasure in achievement placed the family in high esteem. Selig, the oldest son, called Semmy, completed the tenth grade at the Neumünster modern high school; in 1913, he went to Hamburg in order to take a commercial apprenticeship in the wholesale manufactured goods and export business of Meyer Adolf Nathan, at Alter Wall 72-74: "It was considered a distinction when anyone was placed as an apprentice in this house. It took only those with demonstrably good school reports, remembered his younger sister Caroline (b. 2.16.1902). Her brother was drafted as a soldier, survived the First World War, and remained with the firm in which he had trained, rising to department head. In early 1919, Selma and Siegmund Bleiweiss followed their son to Hamburg. They gave up their furniture store in Neumünster and rented a three-story office building at Elbstrasse 60 (today Neanderstrasse, see biographical sketch for Helene Schwarz).

On the ground floor was the business premises; the second floor served as a showroom, and on the upper story they furnished their private spaces. A few years later, there followed a move into a modern 5-room apartment at nearby Enckeplatz 4; the furniture store was transferred to Strasse Kohlhöfen 32.

On 28 September 1936, fate struck the family its first blow: their son Martin (b. 2.21.1903), who worked as a commercial clerk and was described as highly gifted by his family, died of a heart ailment at the Israelite Hospital. Another death occurred on 7 December 1937, when the father of the family, Siegmund Bleiweiss, died after a long illness.

His widow Selma, who employed a large staff and, according to tradition, was "the soul of the enterprise, attempted to keep the furniture business going on her own. Since 1933, it had suffered greatly from anti-Jewish measures and campaigns. In July 1938, after a two-month liquidation sale, she shut down the business. The remaining inventory was auctioned off with extremely unfavorable results. Her financial situation worsened when her son Selig, who was the warehouse manager for the Jewish galoshes wholesaler Walter Wulfsohn, at Hohe Bleichen 40-42, was, as a "non-Aryan demoted to warehouse worker by the new owners, Rasch & Jung, at Grosse Bleichen 31. The family had already given up the apartment on Enckeplatz; they now lived on the third floor at Kaiser-Wilhelm-Strasse 115, where Selmas eldest daughter Frieda (b. 7.9.1899), who had lived at Wexstrassse 42, found temporary lodging along with her husband Julius Prag (b. 2.9.1896, as well as her daughter Hannelore (b. 7.22.1931, see biographical sketches for the Prag family).

Selmas middle daughter Caroline, who later married Händler, was the first to leave Germany. Through her social relations as the owner of the Maxima Import Agency, cereals and fodders, at Neuer Wall 10, she was able on 27 July 1938 to emigrate to Mexico by way of the Netherlands and New York.

Carolines youngest sister Sella (b. 5.29.1904) had married the businessman Hermann Canter (b. 4.29.1901) on 21 May 1937. They established their own household at Juliusstrasse 8a in Hamburg-Altona. Sella was a department manager in the fashion house of the Robinsohn brothers on Neuer Wall Strasse, until she, like the other Jewish employees of the "Aryanized firm, were let go. In February 1940, Sell and Hermann Kanter were successful in their flight to the USA.

Her one year younger brother Rudolf Bleiweiss (b. 10.31.1905) already lost his job as a sales representative for the Berlin Dreifuss leather wares factory in 1935, when the business was "Aryanized. Afterwards, he worked as a messenger for the Jewish butcher Willy Oppenheimer at Grindelberg 82. About this time Rudolph got engaged to Mirla/Minna Londner (b. 5.5.1910). Shortly after her birth, her family left Sosnowiec, a city near Kattowitz, and emigrated to Germany, settling in what was then Prussian Altona, at Lindenstrasse 54.

Already as a 16-year old clerk, Mirla supported her brother in his own enterprise. In April 1938, the printing office, as a Jewish firm, was "Aryanized, Afterwards Mirla Londner found a new job with the merchant Kurt Moses (see "Stolpersteine in Hamburg-Eppendorf und Hoheluft-Ost) in his General Clothing Center, "ABC for short, at Alter Steinweg 1. On 28 October 1938, she was, as a Jew of Polish citizenship, "dragged out of bed at Holstenstrasse 79 at 6 oclock in the morning by the police; on the same evening, with approximately 1000 other Hamburg Jews of Polish origin, she was shoved over the German border at Zbaszyn/Bentschen. Her brother Nathan Berndt and his wife Gertrud, née Sauer (b. 1908 in Erfurt) escaped the expulsion because they had already emigrated to the USA in June 1938. As Mirla later reported, she lived for seven months in terrible conditions in a slapdash border camp at Zbaszyn/Bentschen. When she got permission to return to Hamburg, in order to settle her "affairs, she and Rudolf Bleiweiss took advantage of the moment and married on 31 May 1939. Mirla obtained German citizenship by virtue of the marriage. At the same time the couple made efforts to go through the necessary formalities to emigrate. The departure for the USA was supposed to follow on 28 December 1939. Two tickets on the steamer "Manhattan of the United States Line bound for New York were already booked. For reasons unknown, their departure was delayed for a few months. Then the plan fell through.

From late 1938, Rudolf Bleiweiss did forced labor underground for the firm Karl Vogt & Söhne at Bergedorf-Lohbrügge. On 4 July 1940, his work convoy sought to take shelter in a construction trailer on the sidewalk during a heavy rain storm. When leaving the trailer he was run over by a truck driver; he died on the way to the hospital as a result of severe head injuries. The funeral took place on 10 July at the Ilandkoppel Jewish Cemetery. Hamburgs chief rabbi, Joseph Carlebach (b. 1.30.1883 in Lübeck, murdered on 3.26.1942 near Riga; his memorial stone is at Grindelhof 30) gave the eulogy in which he praised Rudolfs diligence and limitless readiness to help others.

His daughter Judith/Judis did not get to know her father; she was born on 31 October 1940. Mirla Bleiweiss remained in the household of her mother-in-law Selma, until she, with her ten month old daughter left Germany in August 1941. Enclosed in a sealed train compartment with other Jewish emigrants, she was able, via France and Spain, to get to Lisbon, and got a ship to the USA, where her brothers family was expecting her.

Rudolfs younger brother, the commercial clerk Hermann Bleiweiss (b. 8.5.1907) had also been compelled to do "work service in the so-called Jew work column, in the vicinity of Buxtehude. He also was able to leave Germany in August 1941. With his later wife Bertha, née Sonn (b. 1908), he had the children Steven-Peter and Susan Ruth. They were born in the USA in 1946 and 1949.

Selmas intention to emigrate to Mexico to her daughter Caroline is attested to by the "Clearance Certificate issued by the Foreign Currency Office on 21 October 1941. Presumably, the death of her son Rudolf and the imminent birth of her grandchild changed her mind. The wife of her son Selig, Käthe Bleiweiss, née Peine (b. 5.8.1900), was also expecting. Her grandson Uri was born on 29 January 1941. Käthe Bleiweiss, the daughter of Leopold and Auguste Peine (see their biographical sketches), was, like her sister-in-law, Sella, a sales person; after the "Aryanization of the Robinsohn Brothers Fashion House, she was let go. She was unable to find any other to make a living.

In June 1942, Selma Bleiweiss, along with her son, daughter-in-law Käthe, and grandson Uri, had to move from Kaiser-Wilhelm-Strasse to the "Jew house at Heinrich-Barth-Strasse 8. On 11 July 1942, their names appeared on an alphabetical supplementary list for deportation to an unknown destination. Because not all the persons on the regular list appeared on the day before to register at the Jewish Community House at Hartungstrasse 9-11 - a few took their own lives or went underground - the Bleiweiss family was shifted onto the regular list as numbers 5-8. The transport went to Auschwitz, where, immediately upon arrival, they were murdered in the gas chambers. Selmas oldest daughter, Frieda Prag, had already been deported with her family from Neuer Steinweg 78 to Minsk on 8 November 1941.

Among the Löwenthal siblings of Duderstadt, Selmas sister Meta and brother Max also lived in Hamburg. Meta Löwenthal had on 10 November 1919 married the Duderstadt businessman Nathan Behr (b. 10.22.1868) and had followed him to Hamburg. The couple lived at Caffamacherreihe 53, where Meta ran a textile wholesale business dealing in bedding materials. After the death of her husband on 4 June 1933, she married, on January 8, 1935, Bruno Berger (b. 5.3.1880) who came from Ratibor, Upper Silesia; for him, too, it was a second marriage. Bruno Berger joined in Metas mail order business. Their business and home address was in a 5-room apartment at Isestrasse 57. From there, the couple later organized their emigration. On 28 July 1938, Meta Berger emigrated to Uruguay. Bruno, probably still bound up in business matters, was supposed to follow with their belongings approved for relocation. However, the beginning of the Second World War rendered the plans inoperable. Bruno could no longer emigrate. His last Hamburg address was the "Jew house" at Rutschbahn 25a; from there he was deported to Theresienstadt on 19 July 1942, and on 15 May 1944 from there to Auschwitz. Meta Berger died, at 84 years, in the "Israelite Refuge of the Jewish community in Montevideo.

Max Löwenthal, her brother, had given up his iron wares business in Duderstadt, and at the end of March 1933 moved with his family to Hamburg. With their departure, there were only 33 Jewish inhabitants left in Duderstadt. In the Hamburg metropolis, they probably hoped for greater security.