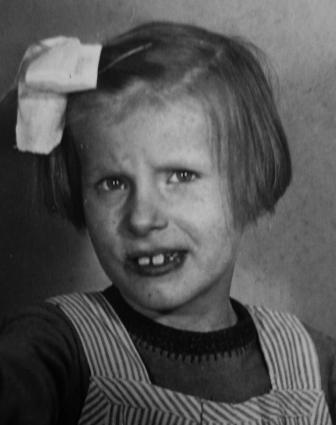 Ursula Bohmann was the second daughter of her parents Heinrich Wilhelm and Martha Amanda Bohmann, who had lived in Harburg for several years. Her father worked at the Harburger Eisen- und Bronzewerke (today: Harburg-Freudenberger Maschinenbau GmbH), an iron- and bronzeworks, at Seevestraße 1. The authorities categorized him as an "occasional drinker and "antisocial. Ursulas Mutter, however, was considered a "reputable, righteous woman. The youngest of six children, she was from East Prussia. After leaving school, she had first been a domestic worker. At age 23, she was frequently plagued by convulsions, which had been remedied by medical treatment.

Ursula Bohmann also suffered from epileptic seizures. At age two, she walked, but could not speak. Above all, however, she was a very restless child and demanded a lot of attention, which is why her parents asked the social welfare agency (Fuersorgeamt) for help. A Harburg social worker who then visited the family, noted: "Because of her incessant restlessness, Ursula is a great burden for the family which the parents are not able to bear in the long term.  The parents ask for medical examination and potentially for commitment in Alsterdorf.

The Harburg youth welfare agency (Jugendamt) reacted promptly. Three days later, the senior physician for psychiatry and neurology determined in his diagnosis that Ursula Bohmann was "a child stigmatized by slight Mongolism with intense restlessness  admission to a mental hospitalAlsterdorfis therefore imperative, immediately if possible.

On 16 Nov. 1939, Ursula Bohmann was admitted to the then Alsterdorfer Anstalten, which pastor Heinrich Matthias Sengelmann had established in the 19th century for physically and mentally handicapped people in order to "see Christ in the poor and the wretched, in the least brethren, and to love them for his sake and following his example.

In the 1930s, the then Alsterdorfer Anstalten increasingly lost sight of this noble goal. The belief in the alleged blessings of pseudoscientific hereditary biology and rigorous "racial hygiene ("Rassenhygiene) for the benefit of a healthy "peoples body ("Volkskoerper) replaced individual pedagogical support of disabled people. Gerhard Kreyenberg, then senior physician of the hospital, also embraced this therapeutic spirit of optimism. To him, feeblemindedness was a disease that could be treated by medical means following thorough diagnostics. In this way, he sought not only to help individuals, but to heal the entire "peoples body ("Volkskoerper). When this did not produce the desired result, he considered selection of incurables expedient.

In their intake examination, the physicians in Alsterdorf diagnosed Ursula Bohmann as "feebleminded and having "epilepsy. She had to be fed daily and was tied down to her bed all day. Her mother complained to the state youth welfare agency (Landesjugendamt) about this and applied for her daughter to be discharged. This was successful, for a time. However, when the responsible public medical officer diagnosed a worsening of the girls state of health in a psychiatric follow-up examination, the six-year-old child was committed again as an "urgent custody case in the summer of 1942.

In July of 1943, pastor Friedrich Lensch, the then director of the Alsterdorfer Anstalten, used the severe bombing attacks on Hamburg as an occasion to have 469 of the institutions patients transported to other institutions. When some of the buildings of the Alsterdorfer Anstalten themselves had suffered minor damage from the bombings, he asked the Hamburg Health Department (Hamburger Gesundheitsbehoerde) to have 750 residents moved. Provided the rooms that were then empty were still habitable, the idea was to use them as emergency housing for civilians whose dwellings had been bombed. Hamburgs Senator for Health (Gesundheitssenator) consented and ordered further measures to implement the promised assistance.

Ursula Bohmann was one of the 76 men and children deported to the "Heil- und Pflegeanstalt Eichberg in the Rheingau region on 7 Aug. 1943. The following note was recorded in her medical file: "Moved, as the Alsterdorfer Anstalten have been destroyed.

The "Landesheil- und Pflegeanstalt Eichberg in Hesse was one of the institutions with close ties to the Nazis "euthanasia program. Friedrich Mennecke, the institutions chief physician, was the head of various physicians commissions and an expert working for the "T4-Zentrale in Berlin (the agency running the "euthanasia program for killing mental patients, the disabled, and others), so he was an emphatic advocate and executor of this program of murder. In the first phase of murdering patients, the "Landesheil- und Pflegeanstalt Eichberg served as one of the numerous places where those people selected to be killed were gathered before they were taken to the gas chambers of the nearby "killing center ("Toetungsanstalt) Hadamar.

After this phase of the Nazi "euthanasia program was officially stopped, the murdering continued in Eichberg and other places. Here, the patients were mostly left to their own devices. In addition, the food provided was extremely inadequate. Often, the patients lives were ended by injections. This method had been developed in the childrens ward ("Kinder-Fachabteilung) of the "Heil- und Pflegeanstalt Eichberg, which had been established in 1940/41, and was later used in other parts of this institution.

Penned up tightly in a freight car, the patients from Alsterdorf arrived in Hattenheim on 8 Aug. 1943, were loaded "like cattle onto trucks and taken to the "Heil- und Pflegeanstalt Eichberg. Of the 28 children in this transport, 20 were immediately transferred to the childrens ward ("Kinder-Fachabteilung); the other eight arrived there a few days later after first being taken to the division for "observation of women (Abteilung für "Frauen-Beobachtung). When Ursula Bohmann had to die on 23 Sep. 1943, she was not even eight years old.