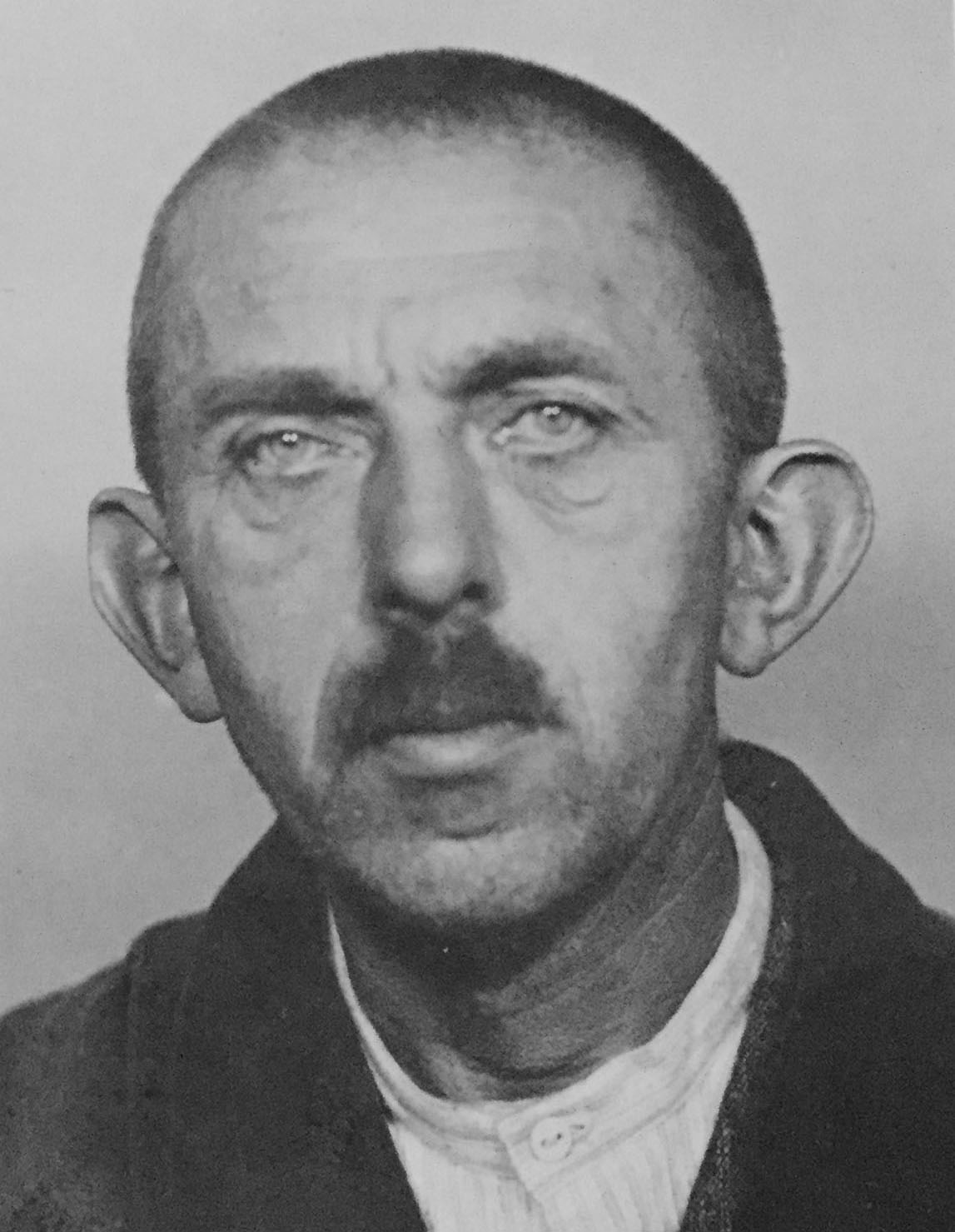 Paul Heinrich Buhrmeister, born 7.9.1892 in Hamburg, transported on7.8.1943 from the former Alsterdorfer Anstalten (today Evangelische Stiftung Alsterdorf) to the Eichberg sanatorium and nursing home in the Rheingau, on 12.10.1943 further transported to the Hadamar/Lahn state sanatorium, murdered on 29.10.1943 in Hadamar

Hamburg was a growing city around 1890 with over 600,000 inhabitants. There was a great demand for workers in the port and free port, in trade, industry and construction. Job seekers came to the city from the surrounding rural areas, but also from far away, including the parents of Paul Heinrich Buhrmeister.

His mother, Caroline Charlotte Magdalena Rummel (born June 26, 1870 in Oldesloe), had moved to Hamburg in 1889 with her widowed mother Catharina Christina Rummel, née Timm (born April 28, 1827 in Oldesloe), from Oldesloe (from 1910 Bad Oldesloe), which at that time had a population of around 4,200. They lived in Hamburg's Neustadt (Dammtorstraße 34 and Dragonerstall 5) as subtenants. We have no information about their occupations. Paul Buhrmeister's grandmother died in 1897 at the age of 66 in the Eppendorf hospital.

The father, Friedrich Georg Buhrmeister (born February 4, 1866 in Hörne), had lived in the village of Hörne in the agricultural district of Kehdingen, just before the mouth of the Elbe. The manor house Hörne with adjoining manor park was the center of the small village with the same name. His father Johann Georg Buhrmeister, a bricklayer, lived there, his mother Adelheid Maria, née Peters, had died before the end of 1881.

In January 1890, Friedrich Buhrmeister moved to Hamburg, initially as a subtenant. In March 1891, he began working for the 1st Engineering Department of the Building Department as a "Steinbrügger-Arbeitsmann," and was later employed there as a Steinbrügger (pavement worker).

In December 1891 Friedrich Buhrmeister and Caroline Rummel were married in Hamburg, both belonged to the Evangelical Lutheran Church. Since November 1891 they lived in Hamburg-Eppendorf in Marienweg 9. There their son Paul Heinrich was born on Sept. 7, 1892. At birth, Paul is said to have had a head tumor; more precise details are not found in his patient file. Apart from Paul, the couple had no other children.

Due to a mental handicap, Paul Buhrmeister attended only two years of elementary school and then six years of an "auxiliary school for weakly able children." In Hamburg, the first class, a so-called "Hülfsklasse", for mentally handicapped children had been established in 1892 in an elementary school in St. Pauli (Seilerstraße). In 1900, there were already five auxiliary schools in various parts of Hamburg. Which of these schools Paul Buhrmeister attended cannot be proven due to the illegible writing in the patient's file. He broke off the apprenticeship as a cigar maker he had started after school after only a few days. The following two years he lived at home. Since April 1904, the family's new residential address was Stuvkamp 17 II. floor (Barmbek-Süd).

Paul Buhrmeister's father, who worked in Hamburg as a bricklayer and stone setter, died in May 1907 at the age of 41 of stomach and liver cancer in the Eppendorf Hospital. The mother then worked as a laundress and earned 5 to 7 marks a week. With this, she could no longer afford the apartment rent of 27.50 marks per month as a widow. In June 1907, the building deputation applied to the Senate for permanent annual support of 300 marks. The justification also included a kind of assessment: "She is trying to earn a living for herself and her son by washing, but this will not be possible for her without pecuniary aid in view of her (son's) need for care and inability to work. Mrs. Buhrmeister is described by the information office of the supervisory authority for the mild foundations as quite worthy and in need of governmental support." In August, the Senate approved an annual support of 240 marks until May 1912.

Paul Buhrmeister's mother married the worker Wilhelm Scherer (born June 26, 1872 in Hamburg) in April 1909 and moved in with him at Alsterdorfer Straße 22 I. Floor. Due to the remarriage she lost her annual support.

On May 25, 1908, Paul Buhrmeister, now incapacitated, was admitted to the Langenhorn State Hospital; his mother was his guardian. About a year later, on June 14, 1909, he was transferred to the nursing home Hamburg 22 (= Versorgungsheim Farmsen), built in 1904, where he worked as a laborer in 1915. The supply home had, among other things, agriculture and a nursery. As far as possible, the people admitted to Farmsen were employed in the supply areas there, including the bakery and slaughterhouse as well as the laundry and tailor shop.
In 1912, the year of his muster, the register of the military substitution authorities noted "Hamburg, im Werk- und Armenhaus" as his home address (the supply home had been built as an extension of the Werk- und Armenhaus Oberaltenallee). A report from the district physician certified that Paul Buhrmeister was "unfit for military service." This was confirmed by the Military Replacement Commission on October 4, 1915.

On December 16, 1931, Paul Buhrmeister was again transferred to the Langenhorn State Hospital, where he remained until February 14, 1935. He then lived again in the Farmsen nursing home and, as noted in a file entry in January 1936, worked in a box factory.

In 1934, the National Socialists established so-called hereditary health courts (Erbgesundheitsgerichte), run by a judge, a public health officer, and a licensed physician, to decide on forced sterilizations. The Hamburg Hereditary Health Court was affiliated with the Hamburg District Court. Amtsgerichtsrat Carl Meinhof (born May, 23 1896 in Zirow) had assisted in various rulings of the Erbgesundheitsgericht in 1935. It is therefore quite possible that he also issued the ruling "is to be rendered infertile. If necessary, the infertility treatment is to be carried out even against his will" in the case of Paul Buhrmeister. (In 1935, the following physicians, among others, were involved in the pseudo-legal decision on forced sterilization at the Hereditary Health Court in Hamburg: Institutional physician Dr. Martin Lua (departmental physician at the Langenhorn State Hospital), senior physician Dr. Hans Demme (1900-1964, neurologist at AK Barmbek and private lecturer), medical councilor Dr. Quast, physician Dr. F. W. Müller).

Paul Buhrmeister was forcibly sterilized at the Barmbek Hospital on Jan. 22, 1936, and was transferred from there to the Farmsen nursing home again on Jan. 28, 1936.

On October 31, 1938, he was discharged from the nursing home Hamburg 22 (Farmsen) and admitted to the Alsterdorfer Anstalten in Kostgeldgruppe II (2. level of costs). A medical report from the Alsterdorfer Anstalten by senior physician Gerhard Kreyenberg (1899-1996) certified that he was "imbecile" (= moderately mentally handicapped with an intelligence quotient between 20 and 49, reading and writing are difficult to learn). This was confirmed by the "psychological examination" conducted on Nov. 11, 1938 in the Alsterdorf Institutions. The results in the areas of arithmetic and writing for 7 and 8 year olds, tests for 2 year olds, 4 year olds, 5 year olds and 6 year olds, gave the 46 year old Paul Buhrmeister an "intelligence age of 6 years" as well as an intelligence quotient of 0.38.

About a quarter of a year after his placement in the Alsterdorf institutions, an entry dated January 13, 1939 in his patient file documented the current status: "Is occupied with household chores, which he performs satisfactorily. Oriented to time and place, gives consistent answers about his past. (...) Participates little in conversations. Is satisfied when he has some tobacco."

On April 14, 1942, after being requested to do so by the "Social Administration, State Welfare Office, Special Office, S.St. I", which was located at Rosenallee 35 (Klostertor), Prof. Dr. Gerhard Schäfer (1874-1944), chairman of the board of the Alsterdorfer Anstalten from 1938 to 1942, wrote a short medical report which stated: "Patient suffers from imbecility, can only read very bumblingly, is very indifferent and has no interest in his surroundings. He is kept busy chopping wood, but achieves little. Further institutionalization is required."

On August 7, 1943, 76 "fosterlings" (28 children, 48 adults) were transported from the Alsterdorf institutions to the Ochsenzoll station in buses operated by Gekrat (= Gemeinnützige Krankentransportgesellschaft mbH), a front organization of the T4 killing organization. From there they took a special train, accompanied by four employees of the Alsterdorfer Anstalten, to the Eichberg sanatorium and nursing home (Rheingau). 24 of them, including Paul Buhrmeister, were transferred on to the Hadamar state sanatorium in October 1943.

Hadamar was one of the T4 killing centers. The killings there, initially carried out with gas, were now carried out with medication. The doctor Adolf Wahlmann, the male and the female head nurse determined who was to be killed. Paul Buhrmeister was probably poisoned with an overdose of Luminal tablets. Adolf Wahlmann (1876-1956), chief physician and medical director from 1942 to 1945, performed the death examinations in the asylum, certified invented causes of death and often also false times of death.

It was not until four months later, on February 21, 1944, that the Hadamar registry office issued a death certificate for Paul Buhrmeister for October 29, 1943; the cause of death was again pneumonia, and the death was officially reported to the registry office by the orderly Philipp Blum from the Hadamar state sanatorium.

Paul Buhrmeister's mother Caroline, married Scherer (Hamburg, Alsterdorfer Str. 8, II. floor) inquired about her son at the Eichberg State Sanatorium on January 8, 1945 (with the necessary postage-paid envelope); according to the postmark, her letter was not received until January 23, 1945. The Eichberg State Sanatorium forwarded her request by mail to Hadamar, where, according to the postmark, it was not received until February 20, 1945. In the meantime, the mother, having received no reply to her letter, had again inquired about her son at the Eichberg nursing home on Febr. 2, 1945. This letter is said to have been forwarded to Hadamar on February 7, 1945, where it was stamped with the date of receipt, February 20, 1945.

On the same day, the administrative inspector of Hadamar replied (without name or signature): "Your letter to the Eichberg State Sanatorium has been sent to us for processing. Unfortunately we have to inform you that your son Paul Buhrmeister has already died on Nov. 29, 1943 in the local institution. The funeral took place quietly at our institution cemetery. We were unable to inform you of the death, since your address was not available in our files. Administrative Inspector".

In 1973, a special commission of the Hamburg public prosecutor's office evaluated the medical records of 24 Hamburg patients who died in Hadamar, including those of Paul Buhrmeister. There were no proceedings or convictions.

All decisions of the hereditary health courts (Erbgesundheitsgerichte) were annulled in 1998.

In May 2020, a stumbling stone was laid for Paul Buhrmeister at Alsterdorfer Strasse 8 in the Winterhude district.

This address, where his mother lived from 1917 to 1945, was chosen because he had lived continuously in care facilities since 1908.