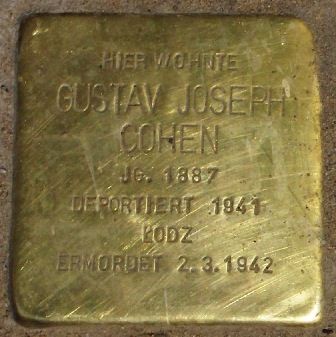 The transport list of the Jews deported to Lodz from Hamburgs Hannover Station on October 25th, 1941 lists Gustav Cohen, his divorced wife Martha and their son Alfred. None of them returned. The plan to emigrate to Shanghai had failed a couple of months before. On February 3rd, 1887, the Jewish merchant Joseph Levy (Leopold) Cohen reported the birth of his son Gustav Joseph at the Hamburg registrars office. His wife Rosalie, née Meyer, likewise of Jewish faith, had given birth to the boy on January 29th at the couples home at Grosser Burstah 10. According to the entry on his culture tax card, Gustav Cohen was baptized. At the age of 26, Gustav himself became a father; his wife Rosalie, née Horwitz, gave birth to a son on December 25th, 1913; he was the names Werner Joseph. A year earlier, Gustav Cohen had registered a business as newspaper publisher and merchant at Schäferkampsallee. Subsequently, he got a job at his father-in-laws company "Siegmund Horwitz, Rohtabak" (raw tobacco) in Hallerstrasse in Hamburg. In 1919, six years after her son was born, Rosi Cohen caught the flu and died. In 1920/21, Gustav Cohen ran the company, together with his brother-in-law Meno Horwitz "Cohen & Horwitz, that he thereafter ran alone, until bankruptcy proceedings had to be initiated in 1924.

Gustav Cohen married again, Martha Aron, born November 11th, 1891, the daughter of Martin and Therese Aron, née Cohen. Martha was a hatter by trade; on December 26th, 1923, their son Alfred Siegbert was born. Ten-year-old Werner, Gustavs son by his first wife, also lived with the family. Since the bankruptcy of "Cohen & Horwitz, Cohen no longer paid culture taxes to the Jewish Community of Hamburg. In 1930/31, he lived at Schäferkampsallee 44 and tried to make a living as a petty trader in the tobacco industry. In 1934, a cigar and tobacco store on the ground floor of Marthastrasse 3 in Hamburg was registered in his name; in 1935, he ran a cigar at Trommelstrasse 25a in Hamburg-St. Pauli, later at Eckernförderstrasse 65 (now Simon-von-Utrecht-Strasse), where he also lived. The store had previously belonged to his brother-in-law Meno Horwitz, who had emigrated to France in 1936. In the meantime, the marriage of Gustav and Martha Cohen had ended in divorce, and Gustav lived in the basement apartment below his store with his girlfriend Inge Aronoff, called Minna. After losing her job in 1938, the clerk and bookkeeper emigrated to England the following year with a house maidens license.

Werner Cohen had attended the Talmud Tora Schule from 1924 until March, 1931 and subsequently absolved a commercial apprenticeship at Stern AG in Fulda, a manufacturer of paints and lacquers, where he was subsequently employed until he was fired after the "Aryanization of the company. Since then, he was preparing for his emigration to Palestine. To this end, he absolved a nine-month retraining course as a metalworker at the Jewish counseling agency for economic aid. In addition, he managed the central buying department of the Kibbuz Maanith, an agency for purchasing food for the Jewish training facilities in and around Hamburg. On account of heart trouble, he was refused the permit to go to Palestine. In 1938, he worked as a mechanic for the Max Duering company in Hamburg, soldering devices and repairs. During the November pogrom, he was arrested on the street in Grindelallee on November 10th. He was detained at the Sachsenhausen concentration camp until December 24th, doing heavy labor at construction sites. Emigration was the condition for his release from Sachsenhausen. In March/April of 1939, Werner Cohen emigrated to Shanghai via Pairs and Marseille. The Chinese international city from 19390 to 1941 was one of the few remaining refuges, and Shanghai plus some South American countries were the only places that did not demand a visa.

Gustav Cohen, as a welfare beneficiary, was assigned to "compulsory work since 1940 and now also tried to emigrate to Shanghai. A tax clearance certificate from the office of the Chief Finance Administrator confirming that all taxes and levies had been paid was an essential prerequisite for the approval to leave Germany. Gustav Cohen submitted a declaration of his assets to the finance authority Hamburg-St. Pauli stating he had no assets whatsoever and hardly any cash. After obtaining the confirmations from the main branch of the Reichsbank in Hamburg and the tax authorities that he paid all taxes and levies, the tax clearance certificate "for the cigar merchant G.J. Cohen for the purpose of emigration was issued. But it took another two weeks before the "TCC finally arrived at the beginning of February. Now, the currency office checked his relocation goods and the requested lists he had compiled for his travel and hand luggage. The crates with his relocation goods were not checked by the bailiff on account of negligibility; the removal of the goods out of the country approved on February 10th with the note: "Has no assets and no income. The Jewish Community supported his emigration; the Hamburg counseling agency of the Reich Association of Jews in Germany, "Wandering Department, a helpdesk for Jewish emigrants, confirmed on February 18th "Gustav Cohen has the entry to Shanghai and we will assume the travel expenses. But the efforts to emigrate failed. On May 6th, 1940, Gustav Cohen had to report to the currency office of the Chief Finance Administrator for a "personal interview.

Two weeks later, the currency office ruled that: "The emigration of Gustav Israel Joseph Cohen cannot be effected yet at the present." A final note in the emigration papers said: "Only approve the hand luggage list at the final check, as a sealed package with silver-plated items still has to be submitted. Perhaps this served as the reason to block Gustav Cohens emigration.

From September 19th, 1941 the Cohens had to wear the "Jews Star. With the beginning of the deportations in October of 1941, emigration was principally forbidden. Gustav and Alfred Cohens last address was the apartment of Alfred Deutsch, a native of Vienna, at Grindelhof 165, where Martha Cohen was also quartered. In Gustavs culture tax card, where his planned emigration, "Shanghai Feb./March 40 had already been noted down, the final entry was: "Left on October 25th, 1941 on account of resettlement; this was exactly the wording prescribed by the Gestapo. Gustav Cohen, his son Alfred and his divorced wife Martha were deported on October 25th, 1941 on the large transport to Lodz in occupied Poland. They arrived at the Ghetto on November 1st. Martha Cohen died there during the winter, on February 12th, 1941. Two and a half weeks later, on February 12th, Gustav Cohen also perished, aged 55. Their son Alfred survived Cold, Hunger and infectious diseases for a further six months, during which he moved several times within the Ghetto. On September 7th, 1941, the 19-year.old boy had to embark on the trip to the nearby Chelmno extermination camp, where he was murdered by exhaust fumes in a specially modified truck.