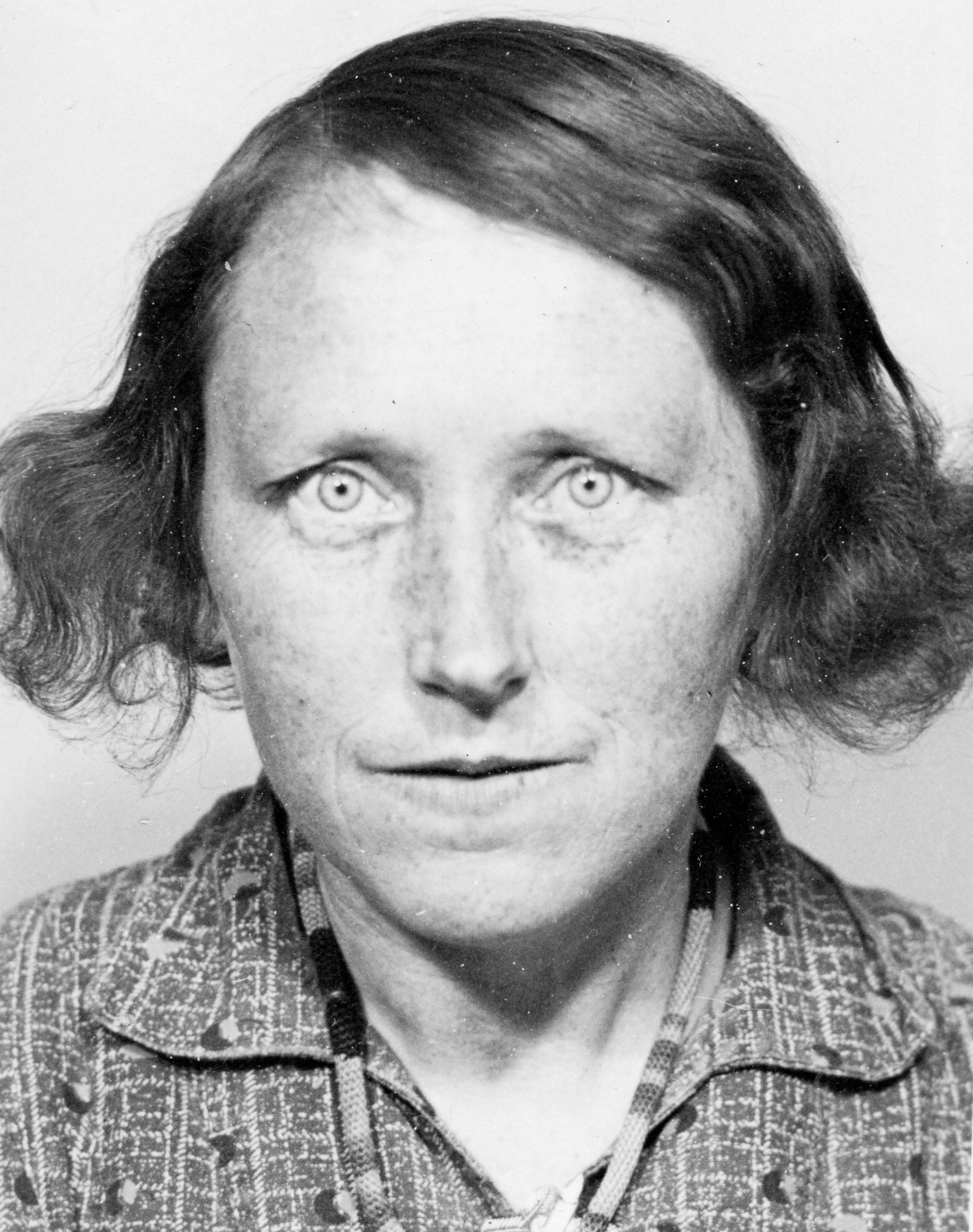 Elsa Caroline Anna Drögmöller, born on 4.3.1899 in Wandsbek, admitted to the then Alsterdorfer Anstalten (now Evangelische Stiftung Alsterdorf) on 18.6.1914, transferred to Vienna to the "Wagner von Jauregg-Heil- und Pflegeanstalt der Stadt Wien" on 16.8.1943, died there on 6.5.1945

Elsa Caroline Anna Drögmöller was born on March 4,1899 in the then still independent town of Wandsbek, which today belongs to Hamburg. Her parents were Hugo Friedrich Johannes Drögmöller, a motor carriage driver and later tramway driver, who was also born in Wandsbek on Nov. 11, 1872, and Friederike Marie Krüske, a flattener, born in Salzwedel on Jan. 17, 1872. (This town in what is now Saxony-Anhalt was then part of the Prussian province of Saxony). Elsa Drögmöller's parents had married in Wandsbek on November 4, 1896.

Elsa Drögmöller's father died as a soldier on October 18, 1915.
According to a memorandum from the Allgemeine Armenanstalt Hamburg, Elsa Drögmöller, who had a normal physical development, had attended the "auxiliary school for the retarded" since the age of twelve, but had never learned to read and only a few letters to write.

Elsa's mother reported that the girl often became angry on little occasion. On June 3, 1914, a doctor at the Allgemeine Armenanstalt declared Elsa Drögmöller's admission to what was then the Alsterdorfer Anstalten (now the Evangelische Stiftung Alsterdorf) necessary because of "complete retardation." She was admitted on June 18.

Elsa Drögmöller had learned to speak and walk at the age of two. When she was admitted to Alsterdorf, her mother reported that the child had fallen down the stairs at the age of six and hit her head on iron. Whether this fall caused Elsa Drögmöller's developmental impairment was not problematized in her patient file. When she was admitted to the Alsterdorf Institutions, she was diagnosed with "imbecility". (This term is no longer used today, referred to a reduction in intelligence or congenital intelligence weakness.)

For the next 30 years, Elsa Drögmöller lived in the Alsterdorf Institutions. Her patient file contains only a few entries, the contents of which are essentially repetitive. In the early years, she was described as "tolerable, clean and useful in the vegetable cleaning room." From 1925 on, her "little labor" was regularly noted. At Christmas and the turn of the year, Elsa Drögmöller was allowed to visit her mother. From 1930 on, she was described as "very untidy in every respect."

On September 23, 1937, the hereditary health court of the time decided that the 38-year-old Elsa Drögmöller was to be sterilized. The basis for this procedure was the "Law for the Prevention of Hereditary Diseases" of July 14, 1933, with which the National Socialists had introduced the forced "sterilization" of allegedly "hereditary patients" and "alcoholics.

The procedure was performed on Elsa Drögmöller after she had been transferred to Eppendorf University Hospital for this purpose on November 16, 1937. She then returned to Alsterdorf.

In the years 1938 to 1942, it was recorded about Elsa Drögmöller that she was often agitated, scolded a lot, quarreled constantly, hit others and pulled other people's hair.

During the heavy air raids on Hamburg in July/ August 1943 ("Operation Gomorrah"), the Alsterdorf institutions also suffered bomb damage. The management of the institution took the opportunity, after consultation with the health authorities, to transfer some of the residents who were considered to be "weak in labor, in need of care or particularly difficult" to other sanatoriums and nursing homes. On August 16, 1943, a transport with 228 women and girls from Alsterdorf and 72 girls and women from the Langenhorn sanatorium and nursing home left for Vienna to the "Wagner von Jauregg Sanatorium and Nursing Home of the City of Vienna." Among them was Elsa Drögmöller.

Another transport was destined for the "Landesheilanstalt Eichberg" near Wiesbaden and the "Heil- und Pflegeanstalt Kalmenhof" in Idstein in the Rheingau. The third transport was to the "Mainkofen Sanatorium" near Passau. Eichberg, Kalmenhof, Mainkofen and the institution in Vienna had been intermediate institutions for the killing institutions Hadamar near Limburg an der Lahn and Hartheim near Linz during the "Aktion T4" (camouflage designation for the "euthanasia" program of the National Socialists, so called after the headquarters of the Berlin euthanasia headquarters at Tiergartenstraße 4). After the official end of the gas murders in the killing centers, the murders continued in the previous intermediate institutions.

Whereas in January 1944 Elsa Drögmöller's patient file documented that she was disoriented in terms of time and place, but that she helped with housework and was usually calm, in April 1945 it was reported that the patient had recently lost a lot of weight and was coughing heavily. A few days later, on May 6, 1945, Elsa Drögmöller died, according to the file, of pulmonary tuberculosis.

In the "Wagner von Jauregg Sanatorium and Nursing Home of the City of Vienna", patients were systematically murdered by overdosing on medication, by not treating illnesses, and above all by depriving them of food. Of the 300 girls and women from Hamburg, 257 had died by the end of 1945, 196 of them from Alsterdorf.

During the National Socialist era, a total of 630 handicapped children, women and men were transported from the then Alsterdorf institutions to intermediate institutions or directly to "euthanasia" killing centers. Of them, 511 people were killed.

Elsa Drögmöller's mother inquired about her daughter's condition in Vienna on February 18, 1946: "I would like to politely request the management to inform me about the condition of my daughter Elsa Drögmöller. Mrs. Drögmöller at Levy Bundesstraße 35". The reply, dated July 10, 1946, was worded as follows: "In response to your card of February 18 of this year, received here on May 2, 1945, we regret to inform you that your daughter Elsa Drögmöller died of pulmonary tuberculosis on May 6, 1945. As a result of the postal blockade between Austria and Germany at that time, you could not be notified of the death and the body was buried on May 17, 1945 at the municipal cemetery of Vienna-Baumgarten. Cemetery Wien-Baumgarten in a common grave. The grave site can be inquired at the cemetery administration (Vienna 14/89). Gez. The Director."

The death notice was addressed to "Mrs. Drögmöller at Levy, Hamburg 13, Bundesstraße 35 B/ II." The widowed Friederike Marie Drögmöller had been living for years with the family of her daughter Martha, who was married to the Jewish worker Bernhard Levy. Here, she had witnessed the ever-worsening discrimination against her Jewish son-in-law and her daughter Martha.

Martha Drögmöller, after having been married to Carl Gustav Dubrow in her first marriage and divorced from him in 1920, had married Bernhard Levy, born in Hamburg on April 6, 1893, in 1921. Like her Jewish husband, the non-Jewish Martha Levy had initially been ordered in 1939 to additionally use a Jewish first name. In February 1941, the Hamburg District Court cancelled this "erroneous" obligation to call herself "Sara".

Parallel to her husband's forced labor assignments from April 1940 to February 14, 1945 with various employers and his obligation to wear the "Jewish star," Martha Levy had learned that Bernhard Levy's brother Robert had allegedly been deported to Poland from the Langenhorn Sanatorium and Nursing Home on September 23, 1940, along with 135 other Jews. In fact, Robert Levy was murdered with carbon monoxide on the same day at the Brandenburg an der Havel killing center (see Robert Levy www.stolpersteine-hamburg.de).

The marriage to the non-Jewish Martha Levy saved the life of her husband Bernhard Levy. Initially protected from deportation, Bernhard Levy was among the last group of Jewish people in still existing mixed marriages to be deported to the Theresienstadt ghetto on February 14, 1945. On May 5, 1945, the SS handed over responsibility for Terezín to the International Committee of the Red Cross. The Red Army reached the ghetto on May 8, 1945, and Bernhard Levy was among the survivors.

The inscription on the Stolperstein in memory of Elsa Drögmöller shows her date of death as 6.5.1944, but the correct date is 6.5.1945.