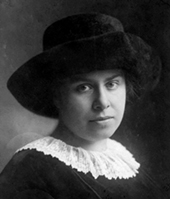 Anna Cohen was born on 6 July 1885 in Schwerin, Mecklenburg, as the daughter of Ernst Samuel Cohen (born on 7 Feb. 1853) and his wife Betty, née Simoni. Her father was a merchant, and according to an entry in the Schwerin directory, he owned a deli that he had taken over from his father Julius Cohen.

Anna Cohen was called Anni in her family. Under the pseudonym of Anna Cohn-Schwerin, she later became active as a painter and craftswoman.

However, first she completed the girls secondary school in her hometown up to the tenth grade and then went to a girls boarding school in Hannover for a year and a half to attend the arts and crafts school there. In 1903, she was enrolled in the Schwerin female teacher training college and in 1905, passed her exam as a teacher at Volksschule (elementary school) and Bürgerschule [a secondary school for the middle classes] for girls. She continued her artistic education in 1906 at the age of 21 at the academy of the Münchner Künstlerinnen-Verein, a female artists association in Munich. The private academy was founded in 1882 and was one of the first training facilities for prospective female artists. During this time, only men were allowed to study at state art academies. Anna Cohen stayed in Munich for the next five years.

After a study stay in Paris in 1912 at the renowned Académie Ranson (Paul-Elie Ranson, born in 1864, died in 1909), Anna Cohen returned to her native town in 1913 and worked as a freelance painter.

On 16 Oct. 1916, her father Ernst Cohen passed away at the age of 63 in the household of his older daughter Louise (born on 12 Sept. 1883). Louise and her husband, the physician Joachim Koller, lived with their son Ernest Klaus in Berlin-Schöneberg. Mother Betty Cohen had already died prior to her husband.

Anna Cohen went to Hamburg in 1918. During the first years, she lived at Mühlenkamp 10 in Winterhude and earned her living as an office clerk. In order to continue her education, she took courses at the "Kunsthochschule (college of art). In 1922, she moved into a studio apartment at Ferdinandstrasse 67, and since then she was listed in the Hamburg directory as "Anna Cohn-Schwerin, Kunstmalerin [artist painter].

Anna Cohen was friends with the painter Mack Kock (actually Wo-Mack Kock, born on 3 Mar. 1897, died on 28 Oct. 1946), who worked in the studio apartment on the opposite side of Ferdinandstrasse for several years. His father Kwang-Sow Kok (actually Kok Kwang-Sow) came from China and worked in Hamburg as an interpreter, as a mediator between Chinese sailors and their shipping companies. The mother, Marie Helene Elisabeth, née Bastian, came from Dresden. Mack Kock had received his training as a master student of Professor Willy von Beckerath (born on 28 Sept. 1868, died on 10 May 1938) and was described by him as one of the first German surrealists.

Anna Cohens nephew Ernest Klaus Koller described his aunt as "a very fun-loving lady. He last visited her at the end of 1938 when he emigrated from Berlin via Hamburg to the USA. He remembered that she received many guests on weekends and ran an open and humorous house.

Although his aunt was a good artist, she could not earn a living from her portrait painting. She accepted decoration work, painted porcelain, and individual neckties. A friend or patron who worked in the coffee business supported her and two or three other artists, according to Ernest Klaus Koller.

Anna Cohen is today credited with one of the first German comic figures, the stylized coffee bean called Darbohne. These picture stories were published in 1927 by the Hamburg-based J. J. Darboven coffee company.

Anna Cohen was a member of the Hamburg and Munich Kunstverein (arts society). She belonged to GEDOK, the community of German and Austrian female artists and art lovers, which was founded in 1926 by Ida Dehmel (born on 14 Jan. 1870), the wife of the writer Richard Dehmel.

After the National Socialists assumed power, the GEDOK was also "forcibly coordinated ("gleichgeschaltet), i.e., brought into line. SA men raided the GEDOK meeting room at Jungfernstieg 26-30 in Apr. 1933. They demanded Ida Dehmels resignation as chairwoman due to her Jewish origin and the expulsion of all Jewish members.

According to her Jewish religious tax (Kultussteuer) file card, Anna Cohen joined the Jewish Community in Hamburg in 1933. Perhaps she hoped to make friends in the Jewish context.

The art historian Maike Bruhns writes about Anna Cohen that she was only documented once, however, in the Jewish Cultural Federation (Jüdischer Kulturbund), with her participation in the Hanukkah Fair. This event took place on the occasion of the Jewish light festival in Dec. 1936 at Neuer Wall 59. The Israelitische Familienblatt reported on this on 10 Dec. 1936: "P.[aul] Henle, P.[aula] Gans, A.[nna] Cohn-Schwerin, E.[dith] Marcus present an abundance of painting works that rank at the highest level.

As a Jewish woman, she could not become a member of the "Reich Chamber of Culture ("Reichskulturkammer), which was tantamount to a ban on exhibitions and work. She was listed in the Gemeindeblatt der Deutsch-Israelitischen Gemeinde, the newsletter of the Jewish Community, under the heading on "List of non-Aryan art teacher ("Verzeichnis nichtarischer Kunstlehrer). She tried to earn her living by teaching all arts and crafts. In Sept. 1940, she applied to the Jewish Technical School for Tailors, located at Heimhuder Strasse 70, as a trade teacher for the subjects of fashion drawing, costume design, history of fashion, as well as arts and crafts techniques. This training course, set up by the Advisory Center for Jewish Economics (Beratungsstelle für jüdische Wirtschaftslehre), was recognized as hachshara, as preparation for a life in Palestine. The Gestapo granted her permission to teach, although it remains unclear whether she commenced her duties. Already in the summer of 1941, the school was closed on the orders of the Nazi agency.

In the fall, Anna Cohen received her deportation order. She was deported to the "Litzmannstadt/Lodz Ghetto on 25 Oct. 1941. When the first "resettlements to the Chelmno/Kulmhof extermination camp were imminent at the beginning of 1942, Anna Cohen was also affected. On 2 May, she asked in a letter to the "resettlement office ("Amt für Aussiedlung) to defer her from the "evacuation. She justified her request by stating that she was employed by Professor Emanuel Hirschberg (born on 13 Dec. 1894, murdered in 1944 in Auschwitz), who had been commissioned by the German ghetto administration to prepare and set up a ghetto museum. Her request was granted. The employees around the Danzig (Gdansk) teacher and Rabbi Emanuel Hirschberg, actually Hirszberg, were busy with the production of dolls, which were supposed to document Eastern European Jewish life, culture, and folklore.

On this account, the authors of the Ghetto Chronicle, who meticulously recorded the events in Lodz, noted on 22 June 1942: "[...] In the department there is a studio in which painters, sculptors, and assistants create highly artistic dolls of all kinds from the Jewish world. The production of these dolls shows both a very high artistic level and precision, not only in the heads and arms made of Plastilin [modeling clay], but also in terms of the attire. In these days, the first series has been finished, which represents a scene from a Jewish wedding. The department is not only on the hunt for all kinds of exhibits and souvenirs, but it is also searching intensively for artists, painters, sculptors, and graphic artists. At present, the staff consists of 17 persons. Humorous satirical elements predominate among the motifs.

Because of these humorous satirical representations, which probably were to be used by the Nazis for propaganda purposes, the work of the so-called "academic department was highly controversial within the ghetto. The "academic department was dissolved on 24 July 1943. Whether Anna Cohen was subsequently able to work in another arts and crafts department is not known. By then 59 years old, she was not exempted anymore from the 78th transport that went to the Chelmno/Kulmhof extermination camp on 28 June 1944. Only those fit for work and employed in important production facilities had any chance of being deferred.

Anna Cohen was murdered in Chelmno/Kulmhof.

How many works and objects she left behind and where they are today could not be determined. Until her deportation, she was registered as residing on Ferdinandstrasse; perhaps some of her works remained there or passed into the hands of her artist friend Mack Kock. Most of his works are said to have been burned during the nights of the Hamburg air raids.

In Blankenese, at Richard-Dehmel-Strasse 1, a Stolperstein is located for Ida Dehmel. The former chairwoman of GEDOK committed suicide on 29 Sept. 1942 by taking an overdose of sleeping pills (see Stolpersteine in Hamburg-Altona). Paula Gans and Edith Marcus are commemorated by Stolpersteine at Eppendorfer Baum 10 and Hagedornstrasse 18 (see www.stolpersteine-hamburg.de).