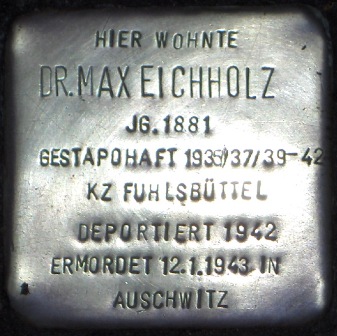 351.
Max Eichholz MdHB (Member of the Hamburg City Parliament)
Max Eichholz was born in Hamburg on 3 Dec. 1881. His parents managed to enable him to get a first-rate school education: Max Eichholz first attended the private school of Adolf Thomsen before changing to a public high school, the renowned Wilhelmgymnasium, where he passed his high school graduation exam (Abitur) in 1900. After studying law at the universities of Heidelberg, Marburg, and Berlin for four years, he earned the degree of Doctor of Law at the University of Freiburg/ Br. with a dissertation on the legal status of the captain. In 1904, he passed the state examination for legal trainees in Karlsruhe, and in 1905, the doctoral thesis followed on the topic of "The legal status of the captain according to the ships articles of 2 July 1902 ("Die Rechtsstellung des Kapitäns nach der Seemannsordnung vom 02. Juli 1902). Until his second state examination in 1907, Eichholz worked as a legal trainee in the Hamburg judiciary. Then the fully qualified jurist with a doctorate in law opted for the path of a self-employed career, setting up a legal practice on Hamburgs Königstrasse.

When war broke out, Max Eichholz volunteered to serve in the imperial army. Due to an eye complaint, he initially was used as an instructor in Bahrenfeld and Schwerin, but subsequently had himself transferred to the 35th Field Artillery Regiment, which  as he knew  was scheduled for combat action. At first, Eichholz was deployed on the eastern and, after the armistice with Russia, on the western front as well. During the war, he rose to second lieutenant of the reserve and was awarded a number of war decorations, including the Iron Cross Second Class, the Honor Cross for Front-Line Veterans, and the Hanseatic Cross.

After the end of the war, Eichholz returned to his hometown, resuming his work as a practicing lawyer. In 1919, he married Adele (called Daisy) Elias, a native of Hamburg. The marriage produced two sons, born in 1920 and 1923. Eichholz and his family lived on Haynstrasse until 1924, on Bebelallee until 1937, and finally at Mittelweg for a short period.

In the year of his marriage, 1919, Eichholz joined the German Democratic Party (Deutsche Demokratische Partei  DDP), a party politically close to the "Civic Association for Harvestehude and Rotherbaum ("Bürgerverein für Harvestehude und Rotherbaum), in which Eichholz was active.

In the 1920s, he joined two other lawyers to found the law firm "Doctors Eichholz, Ruscheweyh, and Häckermann. His collaboration as a lawyer with the SPD deputy and subsequent President of the Hamburg City Parliament Herbert Ruscheweyh was the equivalent in terms of his professional biography to the long-standing political cooperation of the SPD and DDP/DStP (German State Party) in the City Parliament and the Senate of the Free and Hanseatic City of Hamburg.

Max Eichholz belonged to the Hamburg City Parliament from 1920 until its dissolution in 1933. His numerous significant parliamentary speeches were not only manifestations of brilliant rhetoric and political astuteness; they also reveal his constant effort toward compromise as the ultimate objective of the political decision-making process. His extensive activities on committees focusing on the areas of construction, finances, and social affairs show the broad spectrum of his political work. Eichholz aimed above all at combining administrative efficiency with his social political goal of alleviating social inequality.

Even before the First World War, he had been a supporter of the so-called "peoples houses movement ("Volksheimbewegung), whose goal was to bring children from different social backgrounds closer together in vacation activity programs. As a parliamentarian, he focused in his work on the "construction of apartments for the less privileged population  today called publicly assisted housing  tenant protection, and the interests of small savers. The fact that in all of this he never lost sight of  as he put it  "the pecuniary interests of the state, shows him as a politician who always tried to implement his visions closely oriented toward what was feasible.

When after the Reichstag elections of Sept. 1930 the National Socialists had achieved a share of more than 18 percent of the vote across the Reich and the middle-class parties at the center of the political spectrum strove to counter this development by a programmatic shift to the right, Eichholz warned against a breach of political cooperation between the middle classes and Social Democracy. He regarded both as guarantors of political stability both in the Reich and in the federal states. At the same time, like his fellow party member, the long-standing Hamburg mayor Carl Petersen, he called for a tougher line of the state against the radical parties: "It was a basic mistake of us to argue about democracy with those who only accept dictatorship, he expressed his self-critical assessment before the Hamburg City Parliament on 30 Sept. 1930.

For Eichholz, the Nazi takeover of power meant a fundamental turning point in political, professional, and private terms. He no longer belonged to the Hamburg City Parliament, "forcibly coordinated ("gleichgeschaltet) in Mar. 1933. To be sure, he was able to continue his work as a lawyer for the time being, but after passage of the Nuremberg Laws [on race] and the associated exclusion of Jewish citizens from the "state community (Staatsgemeinschaft), he was subjected to increasing reprisals. In the years from 1935 to 1938, Max Eichholz was repeatedly arrested, taken to the Fuhlsbüttel ("KolaFu) and Sachsenhausen concentration camps without any legal proceedings, and severely mistreated there during several weeks of detention in each case. When, after another arrest in the aftermath of the so-called "Crystal Night ("Reichskristallnacht), the November Pogrom of 1938, Adele Eichholz lodged a vehement protest with the authorities, she, too, was taken into "protective custody ("Schutzhaft) in Fuhlsbüttel for a few days.

In 1938, with the ban against Jewish lawyers on practicing their profession, Eichholz was forced to give up his law firm, which he had operated on his own since 1935. Despite being deprived of his rights and persecuted, as a patriot he had refused until then to go into exile. Under the impact of a two-month detention following the November Pogrom, he eventually forced himself to bring at least his family out of the country in early 1939.

Adele Eichholz and their sons initially went to Britain, where they temporarily lived in Bristol and from 1940 onward in Leeds. Eichholzs older son Günter, who had passed his high school graduation exam (Reifeprüfung) at the Hamburg Johanneum high school at Easter 1938 and started university studies in physics, served as a scientific officer with the British Admiralty from 1942 to 1946. In 1947, Daisy Eichholz and her sons left Britain to relocate to Vancouver, Canada. Adele Eichholz died there in 1972.

When Max Eichholz, deprived of the material basis of his livelihood, finally began preparations himself for the path toward exile, he was arrested again in Hamburg in Mar. 1939. Applying the discriminatory and disenfranchising regulations of the so-called "Nuremberg Laws [on race] dating from 1935, the Nazi authorities sentenced Max Eichholz to five years in prison. He began his prison sentence in Fuhlsbüttel, a transfer to Bremen Oslebshausen followed, only to be followed again by a transfer back to Fuhlsbüttel. Eventually, Eichholz was deported on 10 Dec. 1942 to Auschwitz and murdered there on 11 Jan. 1943.

Today, a street of houses in Lohbrügge commemorates this eminent politician of Hamburg.