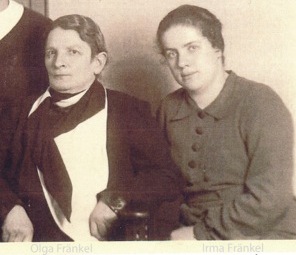 Olga Fränckel was born in Komotau, a village on the southern side of the Ore Mountains in Bohemia. Her parents were the Jewish couple Leopold and Therese Heller. She had a brother named Victor. Nothing is known about her childhood and youth, nor about when she came to Hamburg. There she married the Jewish businessman Franz Joseph Fränckel (*1873), with whom she had two daughters, Else (*1911) and Irma (*1913). At the time of Elses birth, the Fränackels lived at Lortzingstraße 5 in South Barmbek. In 1917 they moved to Isestraße 36. Franz Joseph Fränckel, who served in the First World War, died in 1921, leaving Olga to raise their young daughters alone. It is unknown how she supported the family. After her husbands death, she and the children moved to a smaller, two-room apartment on Haderslebener Straße in Dulsberg.

The elder daughter Else attended school until she was 16, and then entered a commercial apprenticeship. Beginning in 1929, she worked as a bookkeeper in Hamburg. In 1934 she married Karl Lehmann. After the November Pogrom in 1938 he was imprisoned at the Sachsenhausen Concentration Camp for a few weeks. The couple fled to Great Britain in February 1939.
The younger daughter Irma attended the A. Lühring & de Fauquemont Girls School on Eppendorfer Landstraße from 1919 to 1930. She then did a commercial apprenticeship at the Rudolf Otto Meyer heating and ventilation company in Wandsbek-Gartenstadt, which she finished in 1933. She remained in the office at this company for a few years, but was fired in April 1938, "for racial reasons, as her sister later said. She then worked as household help, and lived intermittently with her mother in Dulsberg. Beginning in April 1939 she lived and worked at the Nordheim Trust at Schlachterstraße 40, which belonged to the Jewish Community. At that time, or possibly shortly thereafter, it was declared a "Jews house.

It was probably also at this time that Olga Fränckel was forced to move out of her apartment in Dulsberg and into the "Jews house at Schlachterstraße 40. Her daughter Irma worked as a live-in maid for the Jewish Cahen family at Geffckenstraße 6 from April 1940 until October 1941. In the same month she attempted to get an emigration visa for Cuba, but her hopes were dashed when the ban on emigration was issued for Jews living in Germany. She had to return to the "Jews house at Schlachterstraße 40 on 18 October.

Only about seven weeks later, on 6 December 1941, she and 753 other Jews from Hamburg were deported to the Riga Ghetto. There she met her mothers cousin Mella Prager, who sent a moving account of her and Irmas experience in the ghetto from Prague to Olga Fränckels brother shortly after the war. She wrote that there were 10,000 deported Jews in the Riga Ghetto, who were housed according to where they came from. There was thus a Hamburg group and a Prague group, and they were assigned to work details correspondingly. Irma Fränckel asked to join the Prague groups work detail, however, so that she could search for her mothers relatives. She found Mella Pragers address and visited her one Saturday after work. Mella described the moving moment of the unexpected meeting with the following words: "I still see her ash-blond curls, her loving smile, and I hear her say I guess were related then. The two women remained together in the ghetto for 16 months, and survived the "great hunger crisis.

The Riga Ghetto was dissolved in November, and Irma Fränckel and Mella Prager were sent to the nearby Kaiserwald Concentration Camp. There they were separated  each was sent to a different satellite camp. Irma Fränckel was assigned to forced labor at the Meteor rubber factory and Mella Prager at an AEG plant. From that point onwards they were only able to exchange letters sporadically.

Mella Pragers account goes on to describe how, as the Red Army approached, the rubber factory and its forced labor camp were moved to the Bay of Gdansk and the prisoners transferred to the Stutthof Concentration Camp (as were, successively, the Kaiserwald main camp and all of its satellite camps). Mella Prager was no longer able to communicate with Irma Fränckel, but later a Czech Jewish woman she knew told her that she was on the same work detail in Stutthof as Mellas young relative from Hamburg.

Six months after her daughter was deported, Olga Fränckel was also forced to leave Hamburg. She was one of the 771 Jews who were deported to the Theresienstadt Ghetto on 19 July 1942. Her ordeal found its gruesome end with her deportation to Treblinka on 21 September 1942.
The Stolpersteine for Olga and Irma Fränckel are at their last freely-chosen residence on Haderslebener Straße.