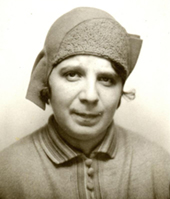 Edith Weitz was born as the child of her Jewish parents Carl (born on 18 Feb. 1876) and Ella (born on 6 Dec. 1880) Weitz. Three years later, her brother Fritz Weitz was born. The family lived at Wilstorfer Strasse 54, which connected Harburgs historic downtown with the Harburg-Wilstorf district and extended past the Phoenix-Werke, the citys largest employer.

Carl Weitz was one of the many members of the Harburg Synagogue Community (Synagogengemeinde) who had left their hometown of Kolomea (today Kolomyia, Western Ukraine) in the Austrian province of Galicia at the end of the nineteenth century in the hope of a better future abroad. In the up-and-coming industrial city of Harburg/Elbe, he believed he had found the right place to realize his wishes and dreams. It soon became clear that he had made a good choice. With unbelievable diligence and bold courage, he quickly achieved considerable prestige and impressive prosperity. Even before the First World War, he opened a furniture and clothing store at Wilstorfer Strasse 42  not far from his private residence. During the First World War, he fought as a soldier in the ranks of the German Army.

The parents gave their children a good education. Edith graduated from high school (Abitur) and then acquired the professional qualifications to work as a secretary in a law firm. On 16 Oct. 1923, she married the merchant Baruch Symon Birnberg (born on 24 Dec. 1899), who was also Jewish. His parents, too, had decided after the First World War to leave Kolomea and start a new life somewhere else.

The young couple moved into their own apartment at Marthastrasse 10 (today: Haeckelstrasse) to the south of the Harburg Synagogue. Miriam Birnberg was born there on 31 July 1924.

On 4 May 1930, Baruch Symon and Edith Birnberg emigrated to Belgium with their then six-year-old daughter, where they hoped to gain a foothold with the help of relatives. Baruch Symon Birnbergs assessment of the political situation in the German Reich may also have played a role in this context, as his daughter later suspected. In view of the election successes of the Nazi party (NSDAP), her father, as she wrote, had come to the realization that "as a Jew one would be able "...to live peacefully in Germany for not much longer.

However, the new beginning was harder than expected. Despite many attempts, Baruch Symon Birnberg was unable to find employment as a commercial clerk in his new home country due to the relatively high unemployment rate. He soon found himself forced to accept short-term job offers in other sectors, such as leather processing, hotels, and warehousing, because he had to be content with getting any employment at all.

Edith Birnberg did not speak French and therefore had even fewer chances on the job market. After the occupation of the country by German troops, she dared to leave the house less and less for understandable reasons. The threat grew, as all Jews in Belgium had to mark their clothing with the "yellow star in public and increasingly, female and male "star wearers ("Sternträgerinnen and "Sternträger) became unemployed, with the result that they were sent to a camp and used for forced labor. Anyone who did not report was arrested at home or during raids on the open street and transferred to the large Belgian Jewish collection camp that had meanwhile been set up in the small town of Mechelen (Malines) between Antwerp and Brussels.

At the age of 18, Miriam Birnberg joined an illegal youth group that operated underground against the German occupiers. In July 1943, she was caught in a police check with forged papers. For this offense, she was sentenced a little later by a court to two and a half years in prison.

Her parents were arrested in 1943 and taken to the Mechelen camp, which the German occupation authorities had meanwhile converted into a hub for the deportations from Belgium "to the East. On 19 Apr. 1943, Baruch Symon Birnberg had to board a train taking him to Auschwitz. The train was stopped on the way by Belgian resistance fighters who were able to break open some of the car doors and free the prisoners. Baruch Symon Birnberg was one of those rescued and survived the remaining months of the German occupation underground.

Edith Birnberg was not destined to have such good luck. The train that transported her from Mechelen to the Auschwitz concentration and extermination camp on 20 Sept. 1943 reached its destination two days later without incident. During the subsequent selection immediately upon arrival, 550 men and women capable of work were given numbers and sent to work in the camp as prisoners, while the other 875 people had to make their way to the gas chambers. The question of whether Edith Birnberg belonged to this group or later perished in Auschwitz-Birkenau can no longer be answered. It is undisputed that she did not survive the Holocaust. Her husband Baruch Symon Birnberg and her daughter Miriam Birnberg waited in vain for a reunion after the Second World War.