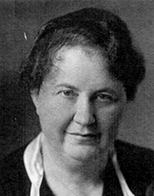 We know nothing about Gretchen Hildesheimer's school years or education. She married the ten years older Hamburg merchant John Fels (see www.stolpersteine-hamburg.de) in October 1905 and lived with him in Hanover for about two years, where their daughter Edith was born on Oct. 27, 1906. According to the marriage certificate, both spouses were members of the Jewish community. One year after the birth of their daughter, the family moved to Hamburg. Gretchen's parents died in 1907 and 1915.

In the war year of 1916, 32-year-old sister Clara Hildesheimer lived with Gretchen Fels at Werderstraße 10 (Harvestehude) for ten weeks. Until February 1917, Gretchen Fels was listed on her husband's registration card at this address. Then she deregistered for Hanover; her husband had presumably been drafted as a soldier. On December 21, 1918, she returned to Hamburg and registered at Brahmsallee 13 III. floor. Her husband was still in the sanatorium in Dresden. He followed her later.

According to Hamburg address books, from 1920 to 1935 "Johs. Fels" lived as a tenant of a floor apartment at Brahmsallee 13 (owned by Rudolf Karstadt AG). The job title was noted as "Managing Director of Gerson GmbH". For a time, the apartment next door also housed the office of E. Gerson GmbH, which was founded in 1910 and conducted business as a metal and chemical broker. From 1922 to 1934, Gretchen Fels had power of attorney for this company.

After the transfer of power to the National Socialists in 1933, the rights of Jews were gradually abolished. Since the end of 1938, they were prohibited from participating in public cultural and recreational activities (theaters, concerts, museums, sporting events, bathing establishments). In October 1939, they were ordered to hand in their radio sets, their driver's licenses were revoked, as were their motor vehicle registrations, and telephone connections had to be canceled. All this also affected the Fels family.

In addition, as of January 1, 1939, Gretchen Fels had to additionally bear the compulsory first name "Sara"; failure to comply with this §2 of the "Second Ordinance for the Implementation of the Law on the Change of Family Names and First Names of August 17, 1938" was punishable. The responsible registrar noted the "additional first name Sara" on Gretchen Fels' birth certificate on January 7, 1939. The disenfranchisement and humiliation was followed by financial plundering by means of "atonement payments," gold and silver deliveries, and account blocking.

After rent protection for Jews was abolished in April 1939, Gretchen and John Fels had to move into an apartment in a "Judenhaus" and later into a rooming house. As of September 1, 1941, they were obliged to wear a yellow "Jewish star" clearly visible at chest height on their clothing.

Together with her husband John (from 1938 the permitted first name "Jona" instead of "Israel") Fels, Gretchen Fels was deported on July 15, 1942 to Theresienstadt in Bohemia, where the German occupiers had set up a ghetto in an old garrison town. In the transports of 1941, among others, persons over 65 years of age had been deferred. In the "old people's ghetto" Theresienstadt, where they were subjected to torturous confinement and lack of supplies, and which for most of them turned out to be a transit station to an extermination camp.

John Fels died in the ghetto at the age of 73. After almost two years in the ghetto, Gretchen Fels was deported to the Auschwitz-Birkenau death camp on May 15, 1944.

Her exact date of death there was not recorded. In 1952, the Hamburg District Court determined the time of death to be "the end of 1945."

The daughter Edith Rudolphson, née Fels, emigrated with her husband Ernst Rudolphson to Palestine in October 1935.

The widowed sister Frieda Dessau, née Hildesheimer (1869-1942?), lived in Hanover (last address: Ohestraße 9); she was deported to the Riga ghetto on December 15, 1941. Her two daughters Fanny Dessau (born May 26, 1896 in Hannover) and Clara Dessau (born Apr. 23, 1900 in Hannover) also received their deportation orders for this transport. Frieda Dessau, née Hildesheimer, was declared dead by the Hanover District Court, and the date of death was set for December 31, 1945.