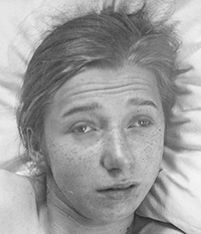 The persecution of minorities and the handicapped began when the National Socialist regime came to power on 30 January 1933.

Frida Johanna Dora Fiebiger was born in Bergedorf on 8 June 1912 to Anna Fiebiger, née Breiel, and her husband Friedrich Fiebiger, who had trained as a cabinet maker but was working as a manual laborer. Frida was the oldest of four children, of whom one died in infancy. Her mother had difficulties during the preganancy, but there were no complications during the delivery. Fridas name was generally written as Frieda. Her condition first became obvious at the age of four months, and was diagnosed as spastic paraplegia. Freida was christened in Bergedorf when she was two months old, and she was immunized for small pox at the age of one. She learned to speak, but her speech remained barely understandable. She never learned to walk.

Friedrich Fiebiger was conscripted to serve in the First World War, although he was 30 years old at its outbreak. He returned as an invalid. Frieda was seven when he returned, and thus of school age, but couldnt attend a public school because of her condition. She had learned to feed herself and to play alone, and was affable.

The family lived at Hinterm Graben 23 before they moved to Weidenbaumsweg 68 in 1930 (today Weidenbaumsweg 116). In 1925 Frieda was thoroughly examined, treated and observed for seven months in the Eppendorf General Hospital. During this time the Hamburg Welfare Agency prepared her admission to the Alsterdorf Mental Institution. Frieda was released from the hospital directly to the Institution, with a diagnosis of "feeble-mindedness and an entry in her records of "improved. Three weeks after her admission an entry was made in her records: "Smarter than she appears to be because of her awkwardness. Affable. Must be fed, pureed food. At the time of admission she weighed 24.5 kg (54 lbs).

Friedas father had taken early retirement because of his war wound. It is possible that his own condition allowed him to better understand his daughter. At Christmas in 1926 he wanted to give her a radio, so that she could listen to music and stay in touch with the outside world. The staff at the Institute approved of his intention, but feared arguments among the patients if one had a radio, and turned down the present.

The doctors did not know how to help Frieda, and they examined her repeatedly. The Hamburg Welfare Agency, as the cost-bearer for Friedas treatment, required a yearly report in order to determine how long she would remain at the Institute. When Frieda turned 16 her father was receiving a veterans pension, and the Institute reported to the Welfare Agency that she would not be able to contribute to the familys income.

Frieda made the best of her situation and began to accept it and do her best. She made herself understood in writing or with signs, and kept herself busy with handicrafts. She especially liked to make beaded coasters and mats. She was mobile thanks to a small wagon. She was able to dress herself, except for her socks  she couldnt reach her feet with her hands.

In January 1931 Frieda contracted such a bad case of flu that her parents were asked to come to visit daily. The flu developed into pneumonia, but it was treated quickly and successfully. Despite these illnesses, Freidas weight remained at about 30 kg (66 lbs.)

In February 1933 the Bergedorf Welfare Agency inquired with the directors at the Alsterdorf Institution whether Frieda was able to return to live with her parents. The answer left no doubt that such a move was impossible: Frieda suffered from involuntary, uncoordinated movements, combined with a stiffening and curvature of the spine, stiffening of the elbow joints and hands on both sides of the body. Her tongue was also subject to uncoordinated movements, for which reason she could neither speak nor eat properly.

Frieda was a patient in Ward 26. Whether this ward was headed by Nurse Alwine Wagener at the time of Friedas residence cannot be determined. The sensitive entry in Friedas file dated 10 October 1933 could have been made by her: "Has a good influence on all fellow patients. She recognizes situations quickly, gives directions in sign language and painstakingly formulated sounds. Likes to make jokes and often has nice ideas.  Can write, reads her Bible daily, knows many passages by heart.  If something is overlooked, she reacts energetically. Otherwise she is happy to perform any jobs. In 1935 Frieda spent an extended holiday with her family. Her condition and behavior remained unchanged, even after she suffered severe convulsions in June 1941. This was the only such attack she ever experienced.

In early 1943 the Welfare Agency approved her continued care in the Institution until 31 July 1945. Ward 26, which was headed by Nurse Alwine Wagnener, housed a group of fourteen women. After the partial destruction of the Alsterdorf Institution on 29-30 July 1943 during Operation Gomorrah, the chief physicians authorized the transfer of 228 girls and women on 16 August 1943 to the former "Steinhof in Vienna. At that time it was called the Wagner von Jauregg Mental Institution of the City of Vienna, today it is the Otto Wagner Hospital. The new patients were placed in various pavilions. Frieda Fiebiger was placed in Pavilion 21. Six other women from her ward in Alsterdorf were also transferred to Vienna. In November 1943 Frieda wrote a letter to Nurse Alwine Wagner, who had accompanied the transport to Vienna. In the letter she wrote of how badly she was treated and how unsanitary the conditions were. The hygiene, occupational opportunities and care were much worse than at the Alsterdorf Institution. When Frieda arrived in Vienna she was 31 years old and weighed 24 kg (53 lbs.) With the next months she lost two kilograms, but reached a weight of 24.5 kg (54 lbs), at which she remained until her death.

Three days after her daughter was transferred to Vienna, Anna Fiebiger wrote a letter of complaint to the directors of the Alsterdorf Institution, stating that she had not been informed of her daughters transfer. She requested more information about the Vienna institute and the length of her stay. In a letter from the Vienna Institute dated 18 January 1944, she was told that Frieda was a "hopeless case and that a return to an institution in Hamburg during the war was impossible. Friedas condition became increasingly worse, but she lived to experience the end of the war. She died shortly thereafter, on 10 June 1945, of a severe case of gastroenteritis. Friedas mother wrote a letter to Pastor Lensch at Alsterdorf on 29 March 1946 asking about the state of her daughters health. He answered that he had no contact to the institution in Vienna, but that he was sure that she was fine. Friedas mother finally received a letter from the Vienna institute on 14 June 1946, with their apology. Because of the postal ban put in place by the Allied Forces, they had not been able to notify Friedas parents of her condition.

Frieda Fiebiger was buried in a common grave at the Vienna-Baumgarten city cemetery. She was 33 when she died.