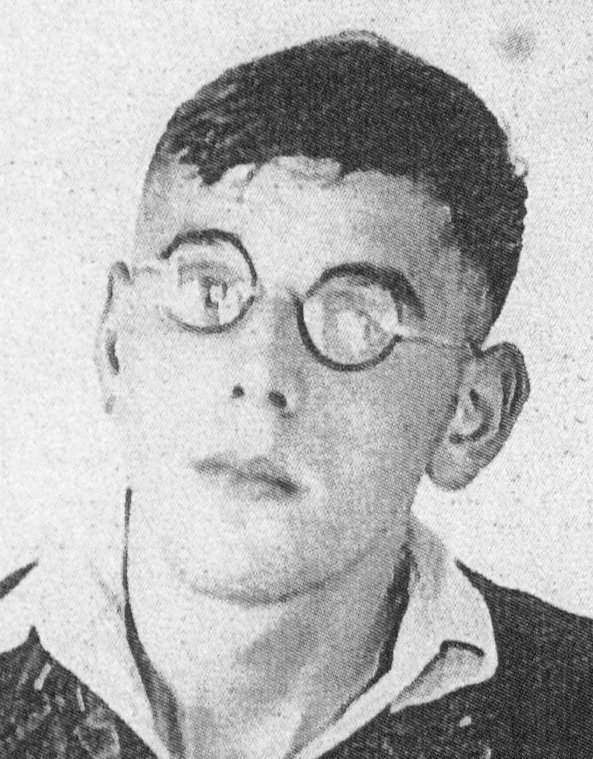 Bernhard Boysen, born on 6 Dec. 1916 in Hamburg, murdered on 24 Jun. 1944 in the "rehabilitation sanatorium of Mainkofen

Three quotations taken from the admission interview with the ten-year-old Bernhard Boysen on 15 Jan. 1927 in the Friedrichsberg State Hospital do not foresee that twelve years later there was doubt about his right to live: "I wish that I was dead, then I would be in heaven, and in answer to the question: "Which is worse, an error or a lie? " A lie is worse. A lie means you go to hell, an error that you go to heaven.

When finally asked if he had bitten somebody intentionally: "Yes, I wanted to bite, but I didnt do it out of my own free will. The examination took place because Bernard Boysen was so conspicuous for his irritability and incalculable volatile character that one wanted to get to the bottom of the matter. The doctors recognised that there was more likely a connection between his father being unemployed than an illness. Bernhard was accommodated in a state orphanage in the Averhoff Straße, after his strongly fluctuating behaviour could not be brought under control in the family.

Bernhard Boysen was born as the third child and only son of Olga and the dockworker Broder Boysen in Wenden Straße 98 in the district that was Hammerbrook at that time on 6 Dec. 1916.

Broder Boysen, born on 29 Mar. 1884 in the Hattstedt Marsh, was a loading supervisor, the mother Olga, maiden name Myhrsch, born on 28 Mar. 1892 in Hamburg, looked after the family. After Bernhard the sister I., a post-war child, was born. The sister "Tutti died of tuberculosis of the brain.

Bernhard suffered from serious illnesses in his childhood and therefore spent several months in the St. Georg General Hospital. At the age of 6 months he was admitted to hospital with bronchitis, where in addition they diagnosed a tendency to cramps and rickets; after six weeks he was released in a state of "personal well-being. His left-handedness gradually became more dominant, whereas the weaker development of the right side of his body became more conspicuous.

Bernhards cognitive development slowed down, so that he was withdrawn from school for one year and then at Easter 1924 started school at the "school for retarded children in Rosen Allee. He surprised everyone by being top of the class but only there did they recognize a significant visual impairment. Step by step he developed serious fits of rage. An eye operation to correct his squint was postponed because he bit a doctor. In the teachers report he was described as a harmless boy, who through the teasing by his schoolmates was easily ruffled and sought refuge with the staff. He didnt take part in games, because the other boys didnt let him, a fact he didnt take into account as he preferred to be alone.

With the diagnosis "Metencephaltis with impulsive aggression, a form of brain damage that is accompanied by destructive impulses, Bernhard Boysen was admitted to the Friedrichsberg State hospital. There he settled down easily. No grounds for a serious change of character caused by the brain (damage) were found. Bernhard was put to work in the hospital and took part in lessons. His reserved apprehensive behaviour occasionally changed to aggressiveness towards others. He was then "put to bed  forced into bed and bound down. Repeated changes from hospital wards and the doctors responsible for him produced no improvement in his condition, which could, according to our modern findings, more likely be the cause for the deterioration of his behaviour.

On 3 Oct. 1930 the clinic of the Hamburg Board of Health and Welfare recommended that the now 13-year-old boy be transferred to "a Hamburg institute for the mentally ill, idiots and epileptics. The then Alsterdorf Institute was recommended to the parents, the Board of Health and Welfare agreed to cover the medical costs. Bernhard Boysen obviously spent the final three months before his release from "Friedrichsberg in the school for retarded children in the Besenhorst orphanage in group therapy, which at the same time was the culmination of his school days.

In the meantime his behaviour alternated between uncontrolled aggressiveness and deep sorrow when he had again caused extensive damage, which his minders put down to the effect of an organic illness, a previously sustained "brain influenza  today one would say meningitis. On 29 Oct. 1930 Bernhard Boysen was moved to the then Alsterdorf institute, which was to be his address for the next 13 years. After a period of settling down he occupied himself with light jobs. In 1932 he had to undergo an operation on his eyes in the Barmbek General Hospital.

In the regular reports to the Board of Health and Welfare the arguments were repeated to substantiate the need for him to be put in an institute  which was approved by 31 Jul. 1946. A new further muscular weakness of the complete right side of the body was cited. Bernhard Boysen was on the whole a pleasant-natured patient. His family had permission to visit him on the last weekend of each month. If he chose to visit them, it had to be clarified whether he was to be collected and delivered or if he could travel independently. In the latter case his parents had to be fully responsible. In the holidays those responsible for him in Alsterdorf saw the "danger of sexual contact and suggested the father have his now 19-year-old son sterilized in Jul. 1935. The operation was carried out in the Eppendorf University Hospital. One year later Bernhard underwent the medical examination for military service in the army area command Hamburg 1, which ended with him being discharged from service on 26 Aug. 1936.

On his 21st birthday on 6 Dec. 1937 Bernhard Boysen would have come of age. One month earlier he officially consented to his incapacitation. This was made legal in January and his father was assigned as guardian.

After the start of the war Bernhard no longer received food vouchers for the holiday period with his parents. "He was free to choose to appear for the meals in the institute. As a result of the far-reaching consequences of the war Bernhard Boysen, in order "to ease the burden on the then Alsterdorf Institute after the bomb attacks of Jul./Aug. 1943, was transferred to an institute where the people died through work or of hunger and cold. There he died on 24 Jun. 1944 at the age of 27. His family were notified by telegram about his funeral.