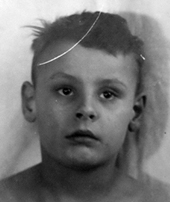 Klaus Ehrenfried Brodrecht, born on 5 Feb. 1923 in Hamburg, admitted to the Alsterdorf Asylum (Alsterdorfer Anstalten) on 23 Jan. 1930, "transferred to the Eichberg State Sanatorium and Nursing Home (Landes-Heil- und Pflegeanstalt Eichberg) in the Rheingau, murdered there on 26 Aug. 1943

Since Aug. 2019, a Stolperstein has been commemorating Klaus Ehrenfried Brodrecht.

He was born there, in the Puttfarcken grandparents house, on 5 Feb. 1923 as the first son of the merchant Werner Brodrecht and his wife Ilse Olga, née Puttfarcken.

Five months later, on 30 June 1923, his grandfather Christian Brodrecht, a pastor in Dorndorf/Saale, baptized him Klaus Ehrenfried in the church of St. Johannis Harvestehude in the presence of his godparents Hans Puttfarcken (uncle) and Christine Brodrecht (aunt).

Klaus later medical records of the former Alsterdorf Asylum reveal that his birth had gone off "without any trouble, but apparently the umbilical cord had been wrapped around his neck. Otherwise, we do not know what his early childhood was like. Klaus Brodrecht was admitted to the Alsterdorf Asylum on 23 Jan. 1930 at the age of six and a half years.

In Dec. 1929, the child and youth psychiatrist Werner Villinger, working in Hamburg at the time and later involved in procedures involving forced sterilization and euthanasia assessment, had examined him and concluded that "taking into consideration his little brother, almost three years old, a sibling who was soon to be expected, and the mothers nervous condition [] it seems urgently necessary that pat.[ient] be admitted to a suitable asylum as soon as possible. (Werner Villinger advocated compulsory sterilization for the "prevention of offspring with hereditary diseases according to the law dated 14 July 1933. From Mar. 1941 onward, he was one of the experts of the "euthanasia headquarters in Berlin, which decided on the life or death of persons with mental disabilities).

Klaus Brodrechts diagnosis at the time of admission was "Idiotism with motor restlessness and tic-like movements (nervous twitches were called "tics). The file contains information about Klaus Bodrechts subsequent life. Among other things, it describes him as being without language, making constant rocking movements, shouting and crying a lot, throwing objects, being quiet, playing by himself, often articulating the word "please after leaves with the family. The file also notes his illnesses, stays in the hospital ward, medication, and therapies.

Klaus was subjected to a treatment widespread at the time (from todays perspective, aggressive), the "v.-Wiesers X-ray therapy, from Dec. 1930 to Mar. 1932 for research purposes. He was one of 126 occupants of the Alsterdorf Asylum at that time to whom these medical experiments for the treatment of restlessness and certain forms of "feeble-mindedness ("Schwachsinn), as it was called, were administered by the senior physician Gerhard Kreyenberg. Kreyenberg abandoned these experiments in 1932 because they had produced no results. Klaus received 36 irradiation sessions at different strengths and directed at different areas of the brain, many of them at short intervals.

The parents were in contact with their son during his 13-year stay in Alsterdorf. They requested one-day visits to the parental home, sometimes also multi-day leaves, which were usually approved. Klaus family had grown in the meantime, with three brothers (born in 1925, 1930, and 1938) living with their parents at Abteistrasse 17 by this time.

In Nov. 1939, Klaus was treated in the infirmary for scabies. This may be an indication of the conditions in the Alsterdorf Asylum at the time.

On 7 Aug. 1943, his file closes with the following note: "Due to severe damage caused by air raids, [patient] was transferred to Eichberg. As we now know, this was a defensive lie. By the end of July 1943, the Alsterdorf Asylum was overcrowded. Those made homeless by the air raids on Hamburg were to be fed and cared for there. The Asylum itself had been damaged by bomb hits, but not destroyed.

The director of the institution, Pastor Friedrich Lensch, used the opportunity to deport patients to other institutions, especially patients who could not work and needed intensive care. On 7 Aug. 1943 and the following days, when the air-raid victims and injured had long since been evacuated from Hamburg, about 500 patients (i.e., some 25% of the occupants) were transported to various institutions via the Ochsenzoll freight station.

Twenty-eight children and 48 men, among them Klaus Bodrecht, were deported to the Eichberg sanatorium near Eltville on the Rhine. The train was not accompanied by nursing staff, and there are many indications that shocking scenes must have taken place along the way. Some patients tried to flee on arrival on 8 August, children were unconscious and frail. Several died in the following days.

Of the 76 persons taken to Eichberg, 60 had already died or been murdered five months later, by Jan. 1944. Klaus Brodrecht was one of them. His death was already recorded on 26 Aug. 1943.

The death certificate shows the concealing cause of death, "cardiac insufficiency and mental illness. Klaus Bodrecht only reached the age of 20 years, of which he had spent more than 13 at the Alsterdorf Asylum.