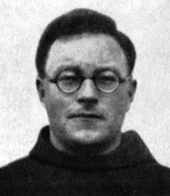 Wilhelm Johannes Josef Brunke was born as the son of the Catholic locomotive stoker Christian Wilhelm Johannes Brunke and his Lutheran wife Anna Margaretha Dorothea Brunke, née Brenning. The family lived in the Phoenix district of Harburg, a quarter built on the Krummholzberg in the years after 1875 during the rapid industrialization of Harburg.

Wilhelm Brunke spent his childhood in this densely developed residential area, and there he went to school with the children from the neighborhood. His teachers were somewhat surprised when one day he talked about wanting to become a priest, which they did not take seriously. In the course of his school days, he had to endure many mockeries on that account.

Despite this, Wilhelm Brunke joined the Franciscan Order in [Bad-Soden-]Salmünster on 28 Mar. 1923 and received the monastic name of Thaddäus. At the age of 27, he was ordained a priest. For almost a decade, he then worked as chaplain in the Franciscan parish of St. Boniface in Mannheim. This was not an easy start. As a North German, he and the South Germans first had to get used to each other.

In 1933, he took over the female youth work in the parish. It was not long before the Nazis total claim to power interfered with church life. In 1937, church youth work in the public sector was completely banned. It was practically limited to the church room under threat of the most severe punishments. This was the beginning of a dangerous tightrope walk for Father Thaddäus. Hiking tours in the surrounding area turned into pilgrimages and public church concerts into solemn song recitals in the parish hall in the evenings, quite often hampered by the jeering with which the Hitler Youth followed the events from the outside.

As the superior of a monastery, Thaddäus-Brunke also had to ensure that the confreres had enough to eat and the necessities of life. That proved his downfall.

As early as 2 Jan. 1936, the Nazis had enacted a law that provided for an obligation to deliver agricultural products. This situation has been exacerbated by the rationing of food since 1 Sept. 1939. The hoarding of food was to be prevented by all means. Anyone violating these regulations was liable to severe punishment.

At that time, the Franciscans lived almost exclusively on alms and gratefully accepted natural produce for their pastoral services, so numerous inhabitants tried to help them with food donations, which they secretly transported to the monastery. One of these relief deliveries was stopped by the Gestapo on 30 Nov. 1940. During the subsequent on-site inspection of the Frauenberg Monastery, the exceeding of the food quota was uncovered. Fourteen days later, the Frauenberg Monastery was closed and Father Thaddäus was arrested for violating the food law.

When the Fulda District Court (Amtsgericht) refused to deal with the case, the Gestapo sent the arrested man to the Breitenau work re-education camp near Kassel on 26 Dec. 1940.

The Nazis had set up this camp in the former monastery of the same name. There the prisoners were to be made aware of what would be "in store for them if they did not show the desired behavior at the workplace. The stay was limited to about eight weeks in order to be able to use the prisoners again in production after the "disciplining. In addition to its function as a work re-education camp, the Breitenau camp was also a concentration camp. During the detention period, it was decided whether a prisoner would be released to work or transferred to a concentration camp. This was the fate of about every fifth prisoner.

On 16 May 1941, Thaddäus-Brunke was transferred to the Dachau concentration camp near Munich, where all imprisoned clergymen, regardless of denomination, had been transferred since the end of 1940. There he was assigned number 25 443 as a "protective custody prisoner ("Schutzhäftling), ranking among those who were accommodated in the so-called "priest block ("Priesterblock or "Pfarrerblock). This camp area consisted of three wooden barracks, No. 26, No. 28, and No. 30, each with a floor area of 100 by 10 meters (nearly 110 by 11 yards). The area was separated from the rest of the camp by barbed wire. The other prisoners were not allowed access to the priest block. The imprisoned priests were permitted to hold daily church services in a room of residential barrack no. 26. Unlike all other prisoners, at considerable intervals they also received food parcels, for which they quickly incurred the resentment of their fellow prisoners. Even the prisoner functionaries who led the work detachments ("Kapos), and the guards from the ranks of the SS, had a grudge against the "holy rollers, detached from the world and work-shy, and all too often, they expressed their aversion in degrading humiliations and vile harassment.

In total, more than 3,000 priests, monastic clergy, and senior church dignitaries were imprisoned in the Dachau concentration camp during the Nazi era. Of these, 1,034 were no longer alive when American troops liberated the camp on 29 Apr. 1945.

In spite of these circumstances, Father Thaddaeus is said to have made a special effort to organize the church services from which all the confreres drew so much strength. One of his imprisoned brothers in faith, the diocesan priest Josef Albinger from Fulda, later reported: "[Fath. Thaddäus] was very popular with his fellow imprisoned priests. He left his hard fate entirely to the will of God and His merciful grace. He regarded life in the concentration camp as a hard but good school for understanding peoples distress and seeking and finding ways to human hearts. He was a man who spared no sacrifice; he was never concerned for his person. He always had an eye for the troubles of his neighbor.

Fifteen months under the conditions of the concentration camp were enough to transform Father Thaddäus from a lively young man and a faithful priest into a man who was in a state of exhaustion. In June 1942, at the age of 39, he suffered a first mild stroke at work, and on 4 Aug. 1942, at about 2 p.m., he suffered a second severe stroke during which he lost his ability to speak and was paralyzed on one side. After extreme unction and Holy Communion had been given to him, he died the following night at about two oclock.

His mortal remains were handed over to the crematorium in Dachau. His parents subsequently received an urn with ashes, which was buried in the cemetery of his hometown of Harburg.

After 1945, a plaque commemorating Father Thaddäus Brunke was unveiled in the church of Frauenberg Monastery.
St. Bonifatius Church in Mannheim, too, features a commemorative plaque that contributes toward his living on in the memory of many people of the parish and beyond that as a gifted youth pastor in the time of Nazism.