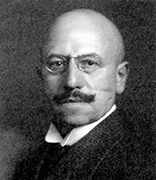 Alfonso David de Castro came from a Sephardic family whose ancestors, persecuted by the Portuguese inquisition, settled in Altona and Hamburg since the 17th century. The family brought forth several well-known physicians, such as Rodrigo de Castro, gynecologist and medical ethicist, who ranks among the great physicians of the early modern era in Germany.

Alfonso de Castro received his approbation in 1891 and worked as a general practitioner and surgeon for decades at his house in Hallerstrasse 81. In 1895, he married Olga, née Alexander, the couple had two sons. Alfonso de Castro was initially a member of the Portuguese-Jewish community, but left it in 1906 and had himself baptized a Lutheran Protestant in 1936. His wife also converted.

Their two sons studied in Germany in the 1920s; Rodrigo Franz Curt, the younger, born 2/25/1903, studied law and became an attorney. The elder, Gustav Hans Emanuel de Castro, born 6/25/1898, studied medicine and opened his practice at Epheuweg 3 in Winterhude in 1926; later, he moved to Rothenbaumchaussee 91. Both lost their livelihood due to the disfranchisement by the Nazi regime. Rodrigo Franz Curt fled from Germany already at the end of 1936, Gustav Hans in 1939; both brothers survived the Nazi era in emigration.

In 1960, Rodrigo Hans de Castro put the following report about his parents on record: "My father had a large and profitable practice that ranked among the best among Hamburgs general practitioners. I also practiced at my fathers premises in Hallerstrasse, in another age.  I also treated patients of my father, My father ran a special sort of private practice; his patients included very wealthy persons, and also people of slight means. For the later, he charged very low fees or nothing at all, and the wealthy patients were charged more.  My father had a lot of patients of so-called Aryan descent, of whom a part quickly drifted away. Thus, the resulting decrease in income after the Nazis rise to power became substantial "very quickly.

Like all other physicians rated as Jewish, Alfonso de Castro was deprived of his approbation in 1938 and thus was forced to sell his house. My parents moved to Bogenstrasse 15. Without income, they impoverished. When they forcibly had to join the Jewish Religious Association (an affiliate of the Reich Union of Jews in Germany), they protested when the Religious Association on June 26, 1940 demanded a levy on income and property from them. In 1942, they had to move from Bogenstrasse to the "Jews house in Frickestrasse 24.

From there, Alfonso and Olga de Castro were deported to Theresienstadt ghetto on the second large transport from Hamburg. According to the death certificate, Alfonso de Castro died there of old age and emaciation on March 3, 1943.

Olga de Castro survived in Theresienstadt until May 15, 1944, when she was deported on to Auschwitz and murdered there.

Both of Olga and Alfonso de Castros sons succeeded in starting anew in their learned professions by great efforts and in spite of health problems, the after-effects of their suffering.

Gustav Hans Emanuel de Castro, the elder son, had fought for Germany at the front in World War I. From 1927, he worked as a ships doctor and tropical disease specialist. He was married to Elfriede de Castro, née Wellke. They had a son, Alfonso, born 1932, who survived with his mother in Hamburg. Elfriede de Castro was not Jewish, she and her husband lived in a so-called "mixed marriage.

In spring of 1936, Hans de Castro together with is cousin, the Berlin attorney Dr. Carlos de Castro (born 1895) submitted a petition for "Aryan equalization, presumably to avoid the threatening withdrawal of his approval for the state health service. A "hopeless initiative: only Hitler himself could authorize such an Improvement of status by an exemption pursuant to Art. 7 of the first ordinance to the law on citizenship of the Reich of November 14, 1935.

When Hans de Castro lost his approbation in, there was no mention of his child, nor of his intention to emigrate in the official list of Jewish physicians in Hamburg. In 1939, he fled to the Netherlands with the intention of emigrating to the United states. But when his guarantor for the American visa died, he remained in the Netherlands for the time being. In the years of Nazi rule, Elfriede de Castro regularly signed letters to the German authorities on behalf of her husband with "Heil Hitler! The Castros marriage survived the separation. A letter of his wife to the Hamburg currency office illustrates Hans de Castros precarious financial situation in Holland: "In April of this year, my husband Dr. Hans de Castro emigrated to Holland and took along his bicycle, which is approx. 1112 years old. It seems that this bike suffered damage on the transport, as its front fork broke when it was first used again in June 1949. Since my husband has absolutely no means to have the bike fixed in Holland, I request permission to pay the amount of RM 7,37 according to the bill enclosed here, so I can send him the front fork I ordered from the Wanderer bicycle works. Hoping for your quick permission, I sign with Heil Hitler! Elfriede de Castro, Hamburg 13, Rothenbaumchaussee 91."

In 1939, Hans de Castro was imprisoned at various camps in the Netherlands, until he succeeded in fleeing to Italy. From 1940 to 1944, he worked at an ambulatory for tropical diseases in Milan, but was forced to live undercover. In February 1944, he was arrested and in August of that year transferred to the Buchenwald concentration camp near Weimar, where he had to do hardest labor in the quarry and suffered physical maltreatment. After the liberation of Buchenwald at the end of the war, he returned to his family in Hamburg and resumed his medical practice in spite of severe impairments due to the abuse he had suffered in the concentration camp. His son Alfonso was 13 years old when his father returned. Hans de Castro died on April 7, 1965 in Hamburg.

Alfonso de Castro studied dentistry. He is married to Elisabeth de Castro, practiced for many years in Hamburg and was active in the chamber of dentists, where he held various positions.

Rodrigo Franz Curt de Castro had studied law in Germany and practiced as an attorney from March 1, 1930. He was married to Gertrud de Castro, née Richter. Their marriage, like his brothers, survived the years of separation and emigration. His widow: "May husband was one of the first Jewish lawyers in Hamburg who were disbarred in the spring of 1933. Rodrigo Curt de Castro in vain challenged his disbarment in court, arguing that the applied law was incompatible with the Weimar constitution of the German Reich which then had not been formally abolished. His argumentation at least caused the Hamburg superior court of administration considerable argumentative embarrassment. In the end, the court saved its face by declaring it was no longer competent to judge on his disbarment as an alteration of the law on the jurisdiction of administrative courts of June 23, 1933 had come into effect retroactively on March 1, 1933; thus, Rodrigo de Castros disbarment could no longer be judicially reviewed; his complaint was "inadmissible. (Later, decrees from the Gestapo could no longer be challenged in court at all, i.e. not only by Jews.)

After that, Rodrigo Curt de Castro emigrated to Uruguay at the end of July 1936. There, however, he was unable to find suitable work and was only able to survive by selling furniture and valuables he had brought along and from financial support by relatives. Having tried in vain to find work for almost two years, he left Uruguay for Chile in 1937. De Castro later declared: "In Chile, I found work right away  I got a job with a telephone company, but was fired because a German female employee, who was the head of local BDM [the Nazi youth organization for girls], declared she could not bear to breathe the same air with me. My landlord ran a shop and had many German customers, who now declared they would boycott his business if I continued to live in that house. Thus, I was unable to stay in Chile any longer. So, he moved on all the way to Sweden via England and Denmark in 1938. In Sweden, finally, he and his wife were able to gain a foothold. In his file at the German compensation agency dated October 1962, there is a handwritten marginal note referring to his experience in Chile reading: "Grimms fairy tales.

His attempt to be appointed as a judge in Hamburg after the war in 1945 did not succeed. In Sweden, Rodrigo Curt de Castro worked as a private teacher. He was able to become a Swedish citizen, amend his German highschool graduation to Swedish standards, study Swedish law and complete these studies by 1950. In February 1952, he passed a law examination that qualified him to be appointed as a judge in 1960. He assumed a position in Lund, comparable to a German Amtsgerichtsrat, i.e. a district court judge. His widow wrote that he was the first judge in Sweden not born in the country. Rodrigo Curt de Castro died at the age of 59 of a heart attack on August 24, 1962.