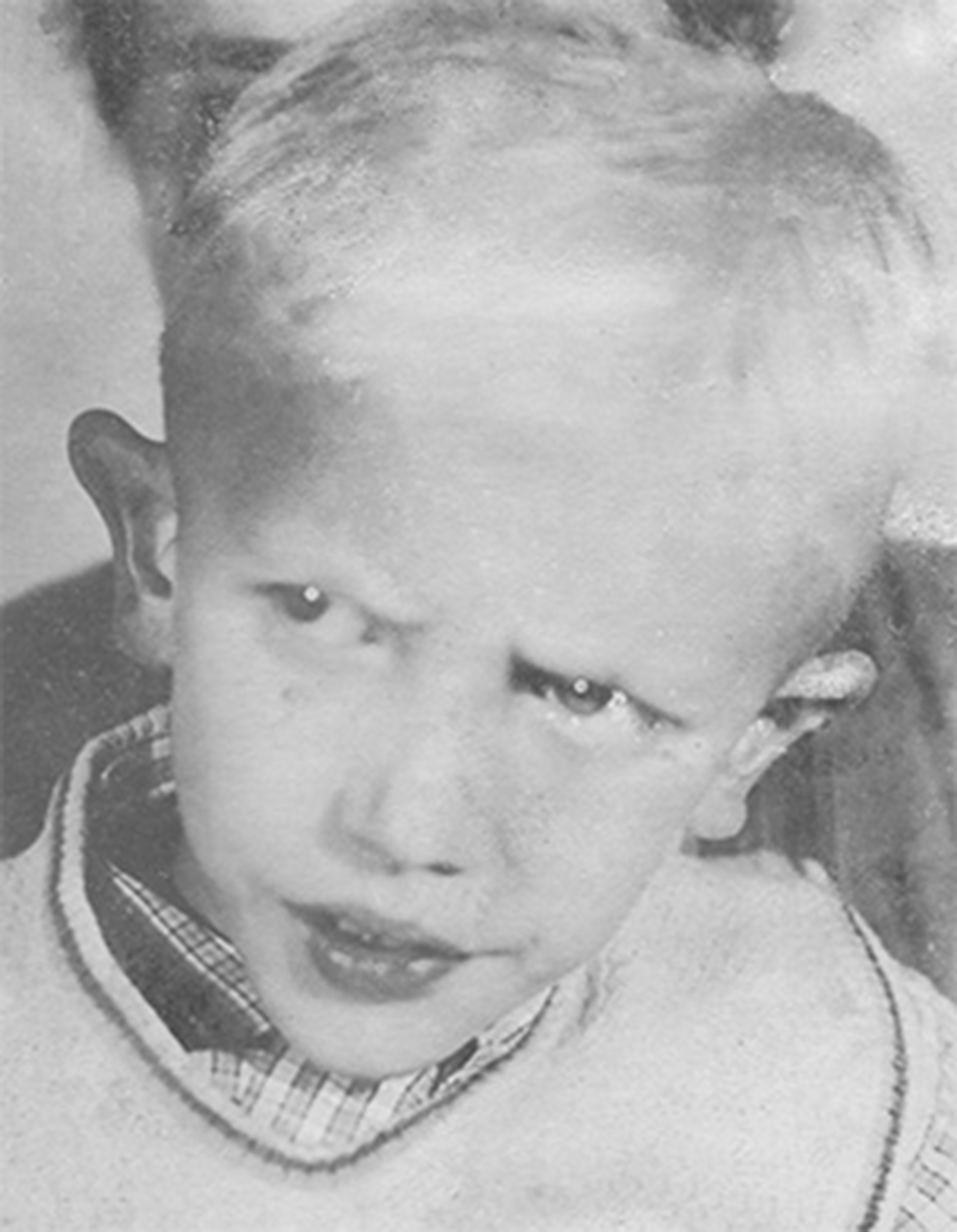 Karl-Heinz Cordes, born on 7 July 1934 in Hamburg, admitted to what was then the Alsterdorf Asylum (Alsterdorfer Anstalten) on 16 Dec. 1940, "transferred to the "sanatorium and nursing home in Mainkofen ("Heil- und Pflegeanstalt Mainkofen) on 11 Aug. 1943, died on 5 Feb. 1945

When Karl-Heinz was admitted to what was then the Alsterdorf Asylum (Alsterdorfer Anstalten; today Evangelische Stiftung Alsterdorf) in Dec. 1940, his mother reported that he was able to walk independently at the age of one and a half. According to the patient file, Karl-Heinz physical development at the time of his admission to Alsterdorf corresponded to his age of six, but he was unable to speak, eat on his own, or dress or undress on his own.

Before his stay in the Alsterdorf Asylum, Karl-Heinz Cordes had lived in the diaconal Kastanienhof institution of the Anscharhöhe Foundation in Eppendorf. It is not known when he returned to his family at Schrammsweg 8 in Eppendorf. He did not stay for long. His mother, who in mid-Aug. 1940 had applied for admission of her son, suffering from "mental illness, to the "protected care ("geschützte Fürsorge) of the Alsterdorf Asylum, renewed her application on 10 Oct. 1940. She wrote, "My husband is in the field and so I am forced to work during the day or to take over my husbands position as janitor, including heating duties. In this connection, I also have a dependent daughter ten years of age and an infant of four months to care for. We live in a rather vulnerable attic apartment and have to go [...] to the neighbors house in case of an air-raid alarm. During an air-raid alarm, it is impossible for me to keep safe a completely helpless and two children in need of help in the required haste. I ask again as politely as I do urgently to grant me at last genuine help and if possible immediately before I myself collapse on account of it all. The distress call was successful. Karl-Heinz Cordes was admitted to the Alsterdorf Asylum on 16 Dec. 1940.

There are only a few entries amounting to three quarters of a page about Karl-Heinz Cordes course of illness in his Alsterdorf patient file. Reportedly, he had to be fed, dressed, and undressed with very extensive support, as well as washed, and he uttered inarticulate sounds. Suppurated tonsils and chickenpox were also noted, as well as on 11 Aug. 1943 the following: "Due to severe damage to the Asylum by air raids, transferred to Mainkofen. Signed, Dr. Kreyenberg.

During the heavy air raids on Hamburg in the summer of 1943 ("Operation Gomorrah), the Alsterdorf Asylum also sustained damage on the night of 29/30 July 1943, and then again on 3/4 Aug. 1943. The director of the institution, Pastor Friedrich Lensch, asked the public health authorities for approval to transfer 750 patients, allegedly to make room for wounded and bomb-damaged persons. With three transports between 7 and 16 August, a total of 468 girls and women, boys and men were transferred to the "Eichberg State Sanatorium and Nursing Home ("Landes-Heil- und Pflegeanstalt Eichberg), to the Kalmenhof near Idstein in the Rheingau, to the "Vienna Municipal Wagner von Jauregg-Heil- und Pflegeanstalt, a "sanatorium and nursing home ("Am Steinhof), and to the "sanatorium and nursing home in Mainkofen ("Heil- und Pflegeanstalt Mainkofen).

Karl-Heinz Cordes was deported to Mainkofen near Deggendorf in Bavaria on 11 Aug. 1943, along with 112 other men, youths, and children. His mother learned of the "transfer on 15 Aug. 1943, apparently when she or Karl-Heinz grandmother went intending to visit him in Alsterdorf. Instead of Herta Cordes, who was apparently pregnant, "Grandma Cordes, as she called herself, sent the following letter to the Alsterdorf Asylum on 16 August:
"To the nurse of Karlheinz Cordes.
[...] We learned yesterday in Alsterdorf that Karl-Heinz has been sent away with other "boarding pupils ["Zöglinge]. Because in Hamburg there is no possibility to feed them properly. One has to put up with it after all. None of us has suffered [bomb] damage, but we were away for nine days out of fear. Not far, only in Pinneberg and we are now here again. My daughter-in-law will be admitted to the Eppendorf Womens Clinic when her hour has come. Now we would like to ask you to send us a few lines as to whether K.-H. has coped all right with the great change. It would be a great reassurance to my daughter-in-law as well.

On 31 October, Karl-Heinzs mother, worried about her son, sent a package to the institution in Mainkofen and enclosed the following letter:
"To the caregiver!
I kindly ask you to soak our Karlheinz zwiebacks to make porridge, since he likes to eat it very much. As you have probably already noticed, K.H. is a very poor eater. I think about it a lot, in Hamburg we could go there and bring him something he liked. I hope that such a thing is also allowed here, the tin boxes that are enclosed are his favorite toy. If he is still very restless and you give him one in [the] hand to hold, it often works wonders. Could we maybe get a message on how he is doing as well? Thank you very much in advance. It is not apparent whether a reply was sent to either of these letters.

The sparse entries in Karl-Heinz Mainkofen patient file do not indicate that he received much attention or even care there. The most extensive note dates from Aug. 1943, when the then nine-year-old boy arrived at Mainkofen: "Very restless patient. Does not speak, only emits inarticulate cries now and then. Hums to himself. Has a predilection for anything movable.

Karl-Heinz Cordes reached the age of ten.
The "Mainkofen sanatorium and nursing home, where Karl-Heinz Cordes had been "transferred, was one of those institutions in which the death of patients was deliberately brought about by food deprivation (starvation diet, meatless and fatless diet, referred to in Mainkofen as "3-b diet ["3-b Kost]), neglect in nursing care, and overdoses of medication. From 1943 to 1945, 762 patients died in the so-called "hunger houses in Mainkofen. In particular, enteritis, TB, and pneumonia were recorded as the alleged causes of death.