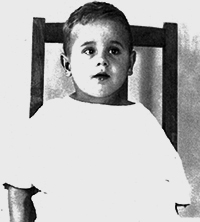 Werner Dabelstein was a large child, born spontaneously with a weight of 5090 g and a length of 56 cm. Nine days after his birth at the Finkenau Women's Hospital in Hamburg, he was discharged home. His mother, Marie Dabelstein, 23, had health difficulties towards the end of the pregnancy, but these quickly returned to normal after delivery. Werner had been baptized while still in the hospital, the only godfather being his grandfather Friedrich Dabelstein.

Marie Dabelstein lived in her parents' household, separated from the father of her child, the warehouse worker Karl Hack. She earned her living as a saleswoman. Werner grew up with his grandparents Friedrich and Margarete Dabelstein. The family also included his mother's two younger siblings, Fritz and Luise. They had all successfully completed elementary school.

Werner thrived, in keeping with his age, under the loving care of his grandmother in particular. Shortly before he was six months old, he was admitted to the Baustraße Children's Hospital (today: Hinrichsenstraße), which was then the children's clinic of the St. Georg Hospital. He was feverish, very restless, screaming and twitching all over his body, had vomited, and his stools were suddenly thin and green in color. The doctor noted a stiffness in the neck that raised fears of meningitis, a meningitis of the brain, a disease that even today can be fatal despite treatment with antibiotics.

To clarify the suspicion of this dangerous infection, a lumbar puncture was performed and the cerebrospinal fluid was examined for pathogens. The suspicion was confirmed; meningococci, the pathogens causing meningitis, were found. With these examinations, five days had passed before treatment could begin. This consisted of administering meningococcal serum and draining the cerebrospinal fluid through further lumbar punctures. Then, when the lumbar sac became stuck, it was necessary to resort to punctures below the occiput. The purulent nerve fluid drained with difficulty and continued to contain meningococci.

Werner's condition was steadily worsening and had become threatening when suddenly there was a slight improvement. The stiffness subsided, as did the sensitivity to pain, and he began to take an interest in his surroundings again, but it seemed as if he could not see. Gradually the visual disturbance gave way. As was recognized much later, his hearing had also been damaged.

A tendency to convulsions persisted, however, when he was discharged home as improved on July 6, 1935. At a later examination in August 1935, it was noted that he could not yet sit up on his own and could not hold his head by himself, but that he pursued objects and was friendly. The next examination was to take place when he could walk.

A welfare worker who visited the family regularly noted after his first birthday: "The child is cared for with much patience and love. The circumstances on the whole make an orderly impression." But "Werner remains a problem child" who needs constant medical treatment. Physically he is developing well, but is susceptible to infections, but above all he is mentally retarded, is often uninterested and inactive when no one is directly addressing him. In his appearance and behavior, he "does not appear abnormal."

Werner was fifteen months old when Maria Dabelstein gave birth to her second son on May 5, 1936. Her mother Margarete did not feel up to caring for both Werner and the infant, so Maria Dabelstein placed the newborn in foster care. Werner began to walk, but did not speak and looked at his surroundings unconcerned. This was the time to "present" Werner to the hospital again. There he was found to be in very good nutritional condition, but also to have a severe mental and physical developmental delay, which included his unsteady gait.

In December 1936, when Werner was almost two years old, the welfare worker noted that Werner was physically developed according to his age, but that he was "rather fat and clumsy", which is why he mostly crawls. Instead of speaking, he called attention to himself with strange sounds and gestures and could become very unwilling. With his energetic will and his uncleanliness he often drives his grandparents to despair, who nevertheless do not want to miss him, because he is occasionally sweet and trusting. Since they did not notice any improvement in his condition, they were concerned about the possibility of progress in his condition. They did not trust the children's hospital, but pressed for an order from the Youth Welfare Office for Werner's examination at the orphanage.

After six months had passed, this finally took place. The grandfather had come to the Youth Welfare Office because he did not know how to help himself in view of Werner's increasingly difficult care. The examination was complicated by Werner's unrestrained constant movements. He also behaved this way at home, the grandmother said, so that he either had to be tied up or constantly held. The doctor explained to her the need to institutionalize Werner. Finally, the grandparents and the mother agreed that Werner should be admitted to what was then the Alsterdorf Institutions. The costs for his stay were borne by the Hamburg welfare authorities. On the day of admission, July 31, 1937, Werner was two and a half years old.

As was customary in the asylum, Gerhard Kreyenberg, then assessor of the hereditary health court, drew up a family tree of Werner's family. It showed what was already known, that Werner could not have inherited the disability, since no one in the three generations recorded had a corresponding disability.

Werner Dabelstein remained unruly in the new environment, "throwing himself on the floor, tearing everything out of the beds and off the table, hitting smaller children until he was happily [sic!] tied to the belt in bed. He lets himself be fed well, screams with a persistence, does not respond to anything, neither scolding nor coaxing, does not speak anything. He wets himself and smears feces."

The next entry in the medical record was on August 23, 1937: Werner was transferred to the isolation ward because of dysentery, from which he was not discharged until six months later. The course of the disease had been unusual. Examinations of stool samples at the Hygienic State Institute had shown inexplicable results: an examination with no findings of dysentery pathogens was followed by one with paratyphoid pathogens, then another with no findings. The next one contained pathogens of both diseases, etc., without finding the sources of the pathogens. Finally, Werner was able to return to his department after three stool examinations without findings. Despite the severe illness, he had gained a slight amount of weight and now weighed 18 kg at the age of three.

After only three weeks, Werner fell ill again and returned to the infirmary, this time for only three weeks: He had mumps. Back in his ward, he behaved irrepressibly. It was again only three weeks before he fell ill again, now with an inflammation of the oral cavity. This time his stay in the infirmary lasted two weeks and the time until the next illness was five months. That was enough to finally make up for the first diphtheria vaccination, which had been postponed because of the previous illnesses.

An expression of Werner's irrepressible strength is found in the entry in the medical record of June 13, 1938: "Pat. tears all wool blankets, despite protective jacket he comes out with his hands, even when strapped in." It was primarily with this behavior that Gerhard Kreyenberg, the doctor in charge, justified to the social administration the necessary continuation of Werner's stay in the institution. They responded in writing on October 6, 1938, by recognizing Werner's need for institutional care until September 30, 1943, three and a half weeks before which he died.

Werner's acute illnesses became less frequent. In 1939 his daily routine was interrupted only twice by acute diarrhea, in 1940 not at all, and in October 1941 because of an inflammation of the teeth. By now almost seven years old, Werner was transferred internally from the children's ward to Karlsruh House in November 1941. In the last report before his transfer, earlier statements were repeated, supplemented by an attempt at understanding: "He endangers the surroundings by his great ferocity, knocks the children over, tears their stuff in two, but one has the impression that it is not out of malice, but out of his irrepressible strength."

In 1942, only the two diphtheria vaccinations that were still due were noted, and monthly weight information: Werner lost from 24 kg to 22.7 kg from January to December 1942.

The last entry in the medical record concerning his behavior and conduct, dated March 11, 1943, contains, beyond repetitions, for the first time the information: "Although he is deaf and dumb, he knows how to make himself understood. He keeps his stuff reasonably clean." How Werner Dabelstein would have developed if his deaf-muteness had been specifically taken into account, we do not know.

After the large-scale Allied raids on Hamburg in July/August 1943, which also damaged the Alsterdorf institutions, the institution management, with the approval of the Hamburg health administration, moved a total of 469 residents to institutions less exposed to the air in order to create space.

The first transport of 128 children of both sexes and males went to the Rheingau region and left Hamburg on August 7, 1943 from the Langenhorn freight station. It included Werner Dabelstein and another 51 boys under the age of twelve who were destined for the "Heil- und Pflegeanstalt Kalmenhof" in Idstein am Taunus, where they arrived the following day.

The formerly pedagogically progressive institution had become a murder facility that served as an intermediate station for the Hadamar killing center as part of Aktion T4. After this direct action was discontinued, the "Reich Committee for the Scientific Registration of Hereditary and Congenital Serious Sufferings," embedded in a complex bureaucratic procedure, set up a "Children's Department" there, where "Aryan" infants and toddlers were observed and, if necessary, murdered on the basis of the verdict of an external three-member expert committee.

Apparently without having gone through the "Reich Committee Procedure," Werner Dabelstein was murdered four weeks after his transfer from Hamburg, on September 4, 1943. He was eight and a half years old and buried in the institution cemetery.

As mentioned above, the Hamburg social administration had agreed to cover the costs until September 30, 1943. It was not until two years after the end of the war, on May 23, 1947, that the Hamburg Youth Welfare Office asked the then Alsterdorf Institutions for a report on Werner Dabelstein's attitude and fate. The office had not received any news of his death.