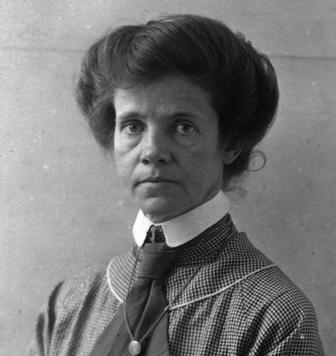 Fanny was born as the oldest child of the merchant Max David and his wife Martha, née Brach, in Berlin. In about 1900, the family moved to Altona, where the father operated a wine and spirits importing firm as he had already done in Berlin. Max David died in 1929.

According to the 1933 directory, in Hamburg Fanny David lived at Kämmererufer 10. Relocation followed to Hauersweg 18 on the second floor, where she lived with her mother until Apr. 1939. As of 5 Apr. 1939, she and her mother had to move to the house at Haynstrasse 5; Fannys sister Irma, too, was forced to move into the two rooms on the ground floor. Additional compulsory relocations followed for the three women: On 7 Apr. 1942 to the "Jews house ("Judenhaus) at Ostmarkstrasse 24 (today Hallerstrasse again), and on 1 Sept. 1942, the Gestapo ordered re-quartering to the "Jews house at Beneckestrasse 4.

From 11 June 1943 onward, the occupants of the building complex at Beneckestrasse 26 were under house arrest. From there, all three women were deported to Theresienstadt on 23 June 1943 on the 14th transport.

Fanny, having grown up in the most difficult economic circumstances, became involved "in practical and political welfare work, joining the Hamburg welfare office (Wohlfahrtsamt), newly established in 1921. According to Werner Jochmann, for her responsible assignment she possessed "special qualifications: a good ability to judge character, patience and understanding, as well as equanimity even in difficult situations and under extreme strain. Due to her competence in the field and her social skills, she was soon appointed inspector and promoted further.

A civil servant in the higher intermediate administrative service, Fanny David was the only woman to head the Hamburg welfare office branch in the Barmbek quarter from 1930 to 1933. In this position, she was among the circle of advisors for the president of the welfare office. Appointed chief inspector in 1932, she was extremely popular with the inhabitants of her district, since they "sensed that the person sitting in front of them was not only a civil servant,  but a human being taking an interest in the fate of every single person  .

Following passage of the Law for the Restoration of the Professional Civil Service (Gesetz zur Wiederherstellung des Berufsbeamtentums) dated 7 Apr. 1933, she was dismissed without notice as a Jewish woman and Social Democrat. At the request of the executive committee of the Jewish Community, she subsequently worked as an "experienced woman of strong character in the newly established advisory center. In 1939, she took over the management of the welfare system within the Hamburg Jewish Community. From the fall of 1939 onward, acting as deputy head of the main welfare division, she carried out "work toward the compulsory transfer of the entire public welfare for Jews to the Jewish Religious Organization [Jüdischer Religionsverband], when the Nazi regime excluded Jews from government benefits.

After all Jewish organizations had been disbanded, the last staff members of the "Jewish Religious Organization were deported to Theresienstadt on 23 June 1943. The deportees also included Fanny, her younger sister Irma Zancker, as well as her mother, Martha David. Entries on the Jewish religious tax (Kultussteuer) card files noted, "deported 23/6 43, an unusual reference, since the intentionally misleading entry commonly used was "outmigration (Abwanderung) or "evacuation. Because of her job, Fanny was relatively well informed about the subsequent fate of the deported Jewish women and men, a fate that now caught up with herself, her sister, and her mother as well.

In Theresienstadt, Fanny was deployed in diverse labor gangs, among others, in the cleaning squad, until she worked within the camp administration.

The two sisters lived with her mother in "miserable circumstances, which became even worse after Fanny was classified as "prominent B because of her "rise to become part of the camps self-administration. This "honor was followed by relocation to "accommodation befitting ones social status, which turned out to be a "dark, small room that the three women had to share with another person.

In her book, Käthe Starke describes the situation when Fanny had read her own and her sisters name on the transport list to Auschwitz in Oct. 1944: " when the door opened again and Fanny David said with good composure but in an absolutely flat voice: ,  we are on it.  The harsh light drew the shadows of decay in her features, which we stared at while attempting to comprehend. Thank goodness Mom is not alive anymore, she said. Fanny made last provisions and handed over to Käthe Starkes sister the Hamburg transport lists she had kept secretly and complemented with transport dates and dates of death. I already see myself with shaved head, Fanny said and sobbed dryly once, I am so afraid. The next morning, 28 Oct. 1944, the deportation took place. It was possible to preserve the lists kept by Fanny.

Irma, the younger sister, was born in Altona in 1901, and she was married to Johannes Peter Claus Asmus Zancker in 1923. On 17 Jan. 1929, son Claus was born, but the marriage was divorced one year later. After the separation, Irma Zancker worked as a shop and home economics teacher at the Hamburg Workshops for the Partially Disabled (Werkstätten für Erwerbsbeschränkte), a job from which she was dismissed without notice in 1933. Not until three years later, she was able to start working as a shorthand typist with the Jewish Community. Up to her forced move to the house at Haynstrasse 5, Irma had lived in Sierichstrasse.

According to information on a Gestapo questionnaire dated 27 Apr. 1939, Irma intended to emigrate to Britain. Her moving goods were checked and estimated on 27 June 1939. They did not include any valuables. The files do not reveal why her emigration did not take place in the end. Probably the start of the war prevented her departure from Germany.

After her deportation, the central work authority in the Theresienstadt Ghetto ordered her to sort potatoes. Later, she worked in the "Wärmeküche [a kitchen facility used for reheating distributed rations]. On 26 Sept. 1943, Irma sent a postcard to Max Plaut, who in his last job worked as the head of the North West German district office of the Reich Association of Jews (Reichsvereinigung der Juden) in Hamburg, with an indirect cry for help to "urgently send food.
On 28 Oct. 1944, Irma was deported to Auschwitz together with her sister and murdered there.

It was possible to rescue her son, Claus Zancker, on a "children transport (Kindertransport) to Britain in 1939. After completing a secondary education, he trained in a commercial job. In 1947, he took on British citizenship, changed his name to Peter David Gordon Sinclair, and lived in Scotland from 1959 onward.

Martha David was born as the daughter of Isidor Brach and his wife Remy, née Simon, in Berlin. In about 1890, she was married to the merchant Max David. Later, the couple moved with daughter Fanny to Altona (see entry on Fanny David).
According to a note in the Jewish religious tax (Kultussteuer) card file, Martha David was "not assessed because of insufficiency [of income] from 18 Sept. 1936 onward at the latest. No details are available about earlier assessments. Probably, she was dependent on support from her daughter Fanny, in whose home she lived.

In Theresienstadt, she shared accommodations with her two daughters. Due to her poor state of health, she never left her room. Medical care was extremely difficult, especially since there were no medications available for her severe asthma. On 12 Oct. 1944, she succumbed to her disease, shortly before her daughters were deported further to Auschwitz.

In 1964, a street in Hamburg-Lohbrügge was named after Fanny David.