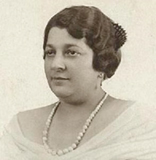 Gertrud Flora Dawartz grew up as one of nine children. Her father Siegmund Müller (18581923) was "inspector at the Ohlsdorf Jewish Cemetery; her mother Emilie, née Haarburger (18581937), took care of the household and the children. For Gertruds sister Alice Graff and her brother Carl Müller, Stolpersteine are located at Grossneumarkt and Fuhlsbütteler Strasse 145 (see www.stolpersteine-hamburg.de). Their biographies also describe the fate of the other siblings.

The family had resided in the administration building on the cemetery grounds since 1892 at the latest, and Gertrud attended the Israelite secondary girls school (Höhere Israelitische Töchterschule) on Carolinenstrasse. According to the residents registration file, she was then employed as a "millinery worker ("Putzarbeiterin). In Feb. 1909, when she was less than 20 years old, she married the Protestant office worker Nikolaus Konrad Horn. Shortly before the wedding, Gertrud moved out of her parents home and in with her sister Alice and her husband.

A year later, on 5 Feb. 1910, their only child, daughter Margarethe Emilie, was born. Starting in 1911, the Horn family lived in Berlin, but in 1919, the couple separated. After the divorce in 1921, mother and daughter returned to Hamburg. Two years later, Gertrud entered into a new marital union with Gustav Friedrich Dawartz (born on 28 Aug. 1869 in Bujendorf/Lübeck), a widower 20 years her senior. Like Gertruds first husband, he was of Protestant faith, and his wife had already died in 1909. The trained master butcher worked as a traveling salesman. Gustav bought fats from slaughterhouses and supplied them to Hamburg companies for soap production. Since 1926 at the latest, the couple lived at Fuhlsbütteler Strasse 5.

In 1928, Gertrud completed a course for "diathermy (high-frequency heat therapy). With the help of electric current, she removed facial hairs, warts, and moles and had a trade license for this work as a "medical practitioner. She practiced her occupation in her apartment. After the Nuremberg Laws [on race] came into force, she was no longer allowed to treat "Aryan women. In Nov. 1939, her husband applied for a permit to treat exclusively Jewish customers after her trade license had been revoked. He pointed out that his business had come to a complete standstill and that he could not take up any other occupation because of his advanced age  he was already 70 years old at the time  and because of illness. Gustav therefore had to apply for welfare assistance and argued that his wife could earn part of her living by resuming her job. The request was granted.

Gertruds daughter Margarethe Horn, a trained infant and visiting nurse, had already fled to Great Britain in 1937 because she had no career opportunities in Nazi Germany. Due to a lack of language skills, she was unable to pursue her profession, but had to work as a domestic help. Most likely, she helped her cousin Margot, the daughter of Gertruds sister Alice, to obtain a maids visa, thus saving her life. In 1941, Margarethe married an Englishman; the marriage remained childless. She and her husband remained closely connected to her cousins family. (Margarethe died in 1983 in southern England.)

In July 1943, an air raid destroyed the apartment at Fuhlsbütteler Strasse 5, and Gertrud and Gustav Dawartz were evacuated to Parsberg near Regensburg. At the time, many city dwellers were assigned quarters in areas that were initially beyond the reach of Allied bombers. Regensburg and its surroundings were home to numerous bombed-out Hamburg residents. Gertrud and Gustav were probably happy to escape the frequent air raids. In addition, the supply of food in the countryside was easier to organize. The inscription indicating "compulsory relocation ("Zwangsumzug) on the Stolperstein therefore does not apply.

Nevertheless, this move proved disastrous for Gertruds fate. By her marriage with an "Aryan, she had enjoyed a certain degree of protection. According to her husband, however, she was arrested in Sept. 1943 due to a denunciation. In a letter to his brother-in-law and sister-in-law in Hamburg dated 24 Aug. 1944  Gustav must have just received the news of the death of his wife  he stated, "[It] was reported [to police] that Gertrud had beaten me and had also made comments, and she was taken to Regensburg by the gendarmerie on 2 Dec. 1943. I was questioned and testified that we had been married for 21 years and that such a thing had never happened; that, on the contrary, I had had a good-hearted self-sacrificing wife. When I wanted to visit Gertrud on 27 April, I was told [...] she had been sent to a concentration camp in Auschwitz on 24 April []. On the 23rd of the month [August], I received news that she had died on the 12th of the month after a serious illness.

Gustav Dawartz did not return to Hamburg either. In July 1945, he and other evacuees from the Hanseatic city were assigned accommodation in Reichenbach in Bavaria. "Return to Hamburg desired read a note on the list. However, he died on 18 Feb. 1946 in the nursing home of the "Kloster der Barmherzigen Brüder vom heiligen Johannes von Gott ("Monastery of the Merciful Brothers of St. John of God) from a stroke and accompanying acute cardiac insufficiency.