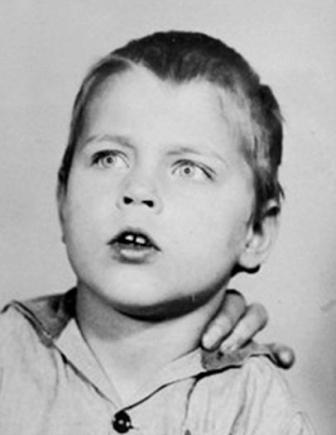 Günther Eichler, born on 20 Mar. 1934 in Hamburg, committed to the Alsterdorfer Anstalten, transferred to the "Heil- und Pflegeanstalt Kalmenhof on 7 Aug. 1943, murdered on 7 Sept. 1943

Günther Eichler was the second child of the worker Gertrud Czirski, born on 23 May 1908. The father of her two children was the unemployed worker Otto Eichler, who had separated from his first wife. Under these circumstances, until their civil wedding in Apr. 1937, Gertrud Czirski and Otto Eichler managed to afford only a meagerly furnished room, where they lived with their two children. The married couple and the two children received intensive care by the family welfare section of the welfare office. During their home calls, the social workers of this authority repeatedly criticized both the housekeeping and the way the children were raised.

During the day, the two children were in day care, provided that the parents took them there. This applied only to a limited extent, however, to Günther Eichler, who in the first year of his life virtually spent more time in hospital than at home. Several times, he was treated for his congenital clubfeet in the orthopedic clinic of the "Alten Eichen cripple home ("Krüppelheim Alten Eichen) in Hamburg-Stellingen. Since the parents were basically physically and mentally unable to cope with the associated strains, Günther was initially committed from there to the childrens home on Höltystrasse in 1937. When he constantly quarreled with the other children there, the State Welfare Office recommended his transfer to what was then the Alsterdorf Asylum (Alsterdorfer Anstalten) in July 1938. The medical officer in charge explained the reasons for the transfer application with the developmental backwardness of the four-year-old boy who, according to him, spoke unclearly and behaved like a two-year-old. Moreover, he went on, the boy was unclean, despite a series of educational efforts on that score.

The diagnosis of the Alsterdorf physicians after the admission examination of the boy was: "imbecility ("advanced feeblemindedness) and clubfoot. The subsequent entries in his patient file usually turned out negatively. Dated 22 Sept. 1938, it contains the following note: "Patient is bad-tempered in bed, very restless and noisy, and also disobedient; neither by kindness nor strictness can one accomplish anything with him. Günthers behavior did not change in succeeding years either. The records say that he had fallen out with other children by taking away from them and destroying their toys; in the evenings, he often crept out of bed to steal from others. In the "Alten Eichen cripple home, he continued to undergo treatment for his clubfeet several times.

In Aug. 1943, Günther Eichler was among the 469 inmates of the then Alsterdorf Asylum who were transported off from the Hanseatic city at the initiative of the institutional director, Pastor Friedrich Lensch. This occurred in close cooperation with the Hamburg public health authority. On 7 Aug. 1943, he was transferred along with 51 other "Alsterdorf children to the "Kalmenhof sanatorium and nursing home ("Heil- und Pflegeanstalt Kalmenhof) near Idstein in the Taunus. During the first phase of the National Socialist murder of disabled persons, this institution had served as a transit point for those who afterward were sent to the Hadamar euthanasia killing center. Despite the official "stop to euthanasia, the specific extermination program was continued in subsequent years  albeit in different ways  at many German "sanatoria and nursing homes such as "Kalmenhof. In the "childrens special ward of this institution, the small patients were not only fed inadequately but also deliberately killed by means of overdosed injections of morphine/scopolamine. The victims usually continued to live for one more day after the injection, some taking three days to die. Sometimes, additional doses had to be administered as well.

One month after his arrival at "Kalmenhof, Günther Eichler was no longer alive. His corpse was buried without ceremony in the institutional cemetery.