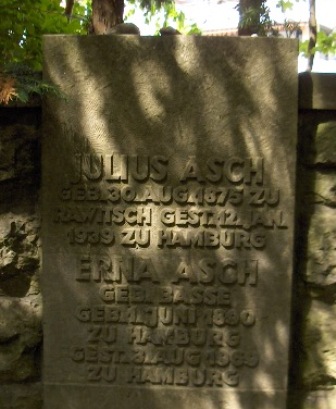 Strandweg 4 on the bank of the Elbe (Altona, Blankenese)

Julius Asch was 24 years old when moved to Hamburg in 1899. He came from Rawitsch, a small town in what was then the Prussian province of Posen. Today it is in Poland and is called Rawicz. Julius finished his schooling and compulsory military service in Rawitsch, then left his hometown after the death of his father. He was the last of the familys seven children to do so. In Hamburg he entered into a commercial apprenticeship at Charles Lavy & Co., an import/export company with 500 employees. The company also manufactured high-quality outerwear. He stayed with the company after his apprenticeship, becoming a partner in 1914, and was promoted to the management in 1916. In 1919 he founded his own subsidiary company, Laco, which became a leading brand for silk scarves and neckties.

When Julius Asch moved into the house at Elbchausee 30 (today 557), he was already a successful businessman and an influential citizen of Hamburg. Two years later he bought the Marienhöhe estate. He renovated the manor house, reforested the surrounding fields and refurbished the gardens and grounds. Every summer he opened the estate as a holiday facility for Jewish children. Julius Asch was a member of the High German Israelitic Community in Altona, which had become a meeting place for the increasing number of Jews coming from Eastern Europe. Decades later, many Jewish Holocaust survivors still remembered the idyllic summer days at Marienhöhe.

In 1934, shortly before "marriages between Jews and subjects of the state of German or related blood were forbidden, Julius Asch married Erna Basse, the sister of his estate caretaker. The marriage to a non-Jew offered him temporary protection, as did the fact that he shared the management of his company with a non-Jew, Gerhard Kelter. In 1938, Asch and Kelter were able to attend Lavy & Co.s 100th anniversary celebration together.

It was in no way a matter of course that Julius Asch was still a partner at Lavy & Co. in the spring of 1938. The Nazi Party and regime had begun expelling Jews from the business sector and gradually plundering Jewish assets two years earlier. Thanks to the size and economic importance of his company and the loyalty of his partners, Julius Asch was able to resist the pressure for a few years.

On 4 January 1938 the Ministry of Economics ruled that a business was a "Jewish business establishment if one owner or partner were Jewish or more than one quarter of the members of the board were Jewish. Asch no longer had a choice. He signed his last contract on 23 June, handing over his shares to the new "Aryan owners Kelter and Weger. He received a severance payment of 850,000 RM.

Three days before he signed this contract, the tax office had already opened a file on Julius Asch. It contained the clear directive: "Julius Asch leaving Chs. Lavy & Co. on 30 June  freeze all assets immediately. This directive was executed. On 30 June, the customs investigation office promptly issued a security order (Sicherungsanordnung) denying him control over all of his assets. They were transferred to a secured account, which was administered by the Foreign Exchange Office (Devisenstelle). Every withdrawal had to be specially requested and approved. In a letter from 4 July, Asch acquiesced to the humiliating situation: "With regard to todays telephone conversation [], in which I was apprised that approval was required for the withdrawal of even the smallest of sums necessary for living expenses and the payment of bills, I would like to request that the sum of 500.00 RM be made available to me. For reasons unknown the Devisenstelle approved the sum of 3000 RM. A short time later the amount was increased.

In the spring one of Aschs employees, the Nazi Party member Tycho Mahnke from Blankenese, had warned him: "You have to get out of here, Herr Asch  and soon! Asch had indignantly rebuffed his advice. Now he realized that emigration was his only resort. He thought that his business connections abroad and the fact that he was still in possession of his passport would make it easier to leave the country. He hoped to transfer some of his assets to accounts outside the country and to find a position at Lavy & Co. Ltd., a sister company of Charles Lavy & Co.

By August it became clear that his hopes had deceived him. Possession of a passport was made dependent upon proof of a certificate of clearance from the Foreign Exchange Office, which confirmed that the bearer had no more capital that he could transfer out of the country. Julius Aschs passport was due to expire at the end of the year. He would have to dispose of his fortune by then, and have paid the immense fees charged to emigrating Jews. Only then would he receive the precious certificate. A race against time began.

After undergoing a kidney operation in Bad Wildungen in October, he applied for permission to emigrate for him and his wife. Their date of departure was to be 10 December 1938. He sold both of his houses in November  the Marienhöhe estate to the president of the Bremen Chamber of Commerce, Gustav Scipio, and the residence on the Elbchaussee to the shipping company owner John T. Essberger. The revenues went into the secured account and were immediately transferred, according to a compulsory levy prescribed by law, to the Deutsche Golddiskontbank. High fees were also levied on all articles of daily use bought after 1933, since they were considered to be goods bought for the purpose of emigrating and thus represented a type of capital flight. The customs investigation office took advantage of the inventorying of Aschs property to perform repeated inspections and submit constant objections. Julius Asch was running out of time. He had received the certificate of clearance from the tax office in Altona, but not yet that from Neustadt. It arrived on 6 December, four days before his planned departure.

Die Hoffnung, Teile seines Vermögens im Ausland erhalten zu können, hatte Julius Asch nach einem abschlägigen Bescheid der Devisenstelle schon im November aufgeben müssen. Was er im Fragebogen für Auswanderer auf die Frage 17 geantwortet hatte, würde jetzt eintreffen. "Welchen Betrag wollen Sie in bar ausführen?  Nichts, außer je RM 10 und je RM 50 auf Dringlichkeitsbescheinigung für meine Frau u. mich." Am 10. Dezember wollte das Ehepaar das Schiff nach England besteigen. Aber der Abreisetag verstrich, ohne dass der Ausreiseantrag abschließend vom Oberfinanzpräsidenten behandelt worden wäre. Aus ungeklärten Gründen wurde die Angelegenheit Julius Asch erst am 28. Dezember weiterbearbeitet  zu spät für Asch, dessen Pass am 31. Dezember 1938 ablief. Beruflich ruiniert, seines Vermögens beraubt und an der Ausreise gehindert, hatte das Leben für ihn allen Sinn verloren.
Asch had already seen his hopes that he might be allowed to retain some of his fortune when he emigrated dashed in November, when the Devisenstelle turned down his request. His answer to question number 17 in the emigration application would now become reality: "What amount of cash do you expect to take with you?  None, except for 10 RM each and 50 RM each, as per certificate of urgency, for myself and my wife. The couple planned to board the ship for England on 10 December, but the day of departure passed without their application for emigration having been finally approved by the office of the Chief Finance Administrator. For unknown reasons, the case was not processed until 28 December  too late for Julius Asch, since his passport would expire three days later on 31 December. Financially ruined, robbed of his fortune, and denied permission to emigrate, life no longer held any meaning for him.

On 2 January 1939 he took his life. Children playing near the river found his body on 12 January. Ice floes on the Elbe had washed it ashore on Strandweg in Blankenese.

Julius Aschs legacy to the citizens of Hamburg includes the Marienhöhe woodland park, the Marienhöhe public swimming pool, and a cemetery on his former estate.