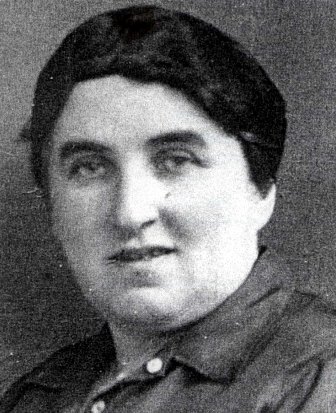 In 1936, Betty and Siegfried Frank had to Blankenese from the small town of Hammelburg in Lower Franconia. Blankenese at that time did not yet belong to Hamburg, but was part of the independent Prussian city of Altona. The anti-Semitic discriminations and the persecution in Hammelburg had become life-threatening, and they hoped to once again find air to breathe in northern Germany. Both of them were natives of Lower Franconia. Betty Frank had been born in Unterriedenberg north of Hammelburg as the daughter of the Jewish religion teacher Emanuel Levi and his wife Jettchen, née Birkenruth. At the time, almost one third of the villages 300 inhabitants were Jewish. There was a synagogue, a ritual bath and a Jewish school; most of Unterriedenbergs Jews made their living from cattle trade. Bettys fathers position as religion teacher included the functions of a prayer leader and a shohet. Betty had two siblings, her brother Simon, four years her junior, and sister Frieda, eleven years her junior.

Siegfried Frank came from the village of Willmars, northeast of Hammelburg in the Rhön Mountains. There too, there had been a Jewish community since the 18th century with synagogue, ritual bath and denominational school. Siegfried Franks family had lived in Willmars since the 18th century; his father was the merchant Abraham Frank, his mothers name was Bettina; the couple had married in Willmars in 1889. Their daughter Ida was born a year later, but she died at the age of six months. The twins Siegfried and Babette were born in 1892; Babette died at the age of three. In 1893, a girl was born, whom Regina and Abraham Frank gave the name Paula. Regina Frank died in 1910 at the age of 45. Siegfrieds father soon remarried, his second wife was named Amalia, called Mali or also Malchen.

Siegfried and Betty Frank also married in Willmars, in the year 1920. Their son Paul was born on July 30th, 1921. In 1924, the family moved to Hammelburg, where they took over Max Stühlers haberdashery, linen, textile and clothing store at Weihertorstrasse 5 (now no. 38). They kept the name "Max Stühler Nachf. that was well established in town, adding "Inh. Siegfried Frank. Betty Frank was again pregnant at the time of the move, her daughter Regina Ruth was born two months later, on April 24th, 1924. Betty Frank kept working as the mother of two small children, handling the store and serving the customers in town when her husband toured the surrounding villages with his the wagon to offer his textile goods to the village folk. Siegfrieds parents Abraham and Malchen Frank had followed them from Willmars to Hammelburg in 1926, and they now all lived in the rented house in Weihertorstrasse, so its probable that Siegfrieds stepmother looked after the children when the parents were at work. The family was very religious, practicing their faith in everyday life, observing the Jewish holidays and going to the synagogue on Sabbath, where Siegfried officiated as assistant prayer leader. In a 1995 correspondence with the mayor of Hammelburg, Paul Frank wistfully recalled how he was called to read the Tora for the first time at the synagogue that was destroyed in the pogrom night of November 9th, 1938.

Betty and Siegfried Franks business ran well  until March, 1933. When the Nazis came to power, the Franks, like other Jews in Hammelburg, increasingly became the objects of anti-Semitic harassment and boycott measures. Already after their arrival in Hammelburg in early 1924, the couple had again and again been the target of anti-Jewish behavior. A first local chapter of the Nazi NSDAP party had already been organized in 1923 with the Heinrich Lang as its most active member. Lang, also a storm trooper, ran a movie theater and lived in Weihertorstrasse directly across the street from the Franks.

After the local Hammelburg chapter of the NSDAP had been founded again in 1930, abuse, racist taunting and slander were intensified, above all fuelled by Heinrich Lang, who also a leading member of the NSKK, the Nazi automobile corps. After March, 1933, the windows of Betty and Siegfried Franks store were repeatedly smashed, customers prevented from entering the shop, the Franks and their family members were accosted an threatened. The sales decreased while the Franks had to meet there financial obligations. They held on for three more years before they gave up. They had to close their store in 1936.

Betty and Siegfried Frank no longer saw any possibility for themselves and their children to remain in Hammelburg. Paul and Ruth Frank were bullied, too. Other children accosted them when they played outside; finally, the Jewish children of Hammelburg retreated to the closed inner courtyard to play in peace. At the end of October, 1935, the parents sent their fourteen-year-old son Paul to Frankfurt start an apprenticeship at a Jewish training institution. At the same time, Siegfried Frank had heard from the Hammelburg Jewish Community that the Hamburg Jewish Community was looking for a new manager for their youth recreation country home Wilhelminenhöhe at Rissener Landstrasse 127 in Blankenese. Siegfried Frank applied for the position together with his wife; the couple passed the required examination and got the job. In the summer of 1936, the Franks moved from Lower Franconia. Their daughter Ruth joined them at the end of August, and Paul, too, came to Hamburg from Frankfurt. Siegfried Franks parents Abraham and Malchen Frank, however, stayed in Hammelburg.

The family got an official apartment at the institution, Ruth attended the Jewish girls school in Carolinenstrasse, and Paul began an apprenticeship as a cabinetmaker at the Hachshara woodworking shop in Weidenallee. Both children had to commute a long way, as the Wilhelminenhöhe was at the western end of Blankenese, almost in Rissen. There, too, there were Hachshara courses for young Jews, with a focus on gardening. The Wilhelminenhöhe was a religiously run institution, but the young people came from various Zionist organizations  the religious Bachad, the leftist Hechaluz and the boy scout association Makkabi Hazair. Paul Frank, too, absolved a preparation course at Wilhelminenhöhe, for which he took leave from his cabinetmakers apprenticeship in Eimsbüttel. In addition, he in summer supervised childrens groups at the Kibbutz Shachal, a Bachad Hachshara center at Steubenweg 36 in Blankenese (now Grotiusweg 36). The children came from the Israelite Community in Altona every day, as the center also served as a daytime vacation colony.

Paul Frank left Germany in the fall of 1938 with the Youth Alija. He was 17. On October 25th, the young women and men boarded a ship for Tel Aviv from Triest (Italy), arriving in Palestine five days later. Betty and Siegfried Frank also succeeded in getting a place on one of the childrens transports from Hamburg to England. She left Germany in the middle of December, 1938, Before, she had had to apply to the Hammelburg registry office for an alteration of her birth certificate by adding the compulsory additional name Sara. Both children never saw their parents again.

Siegfried Franks parents Abraham and Malchen became victims of the November Pogrom in Hammelburg; led by the Franks neighbor, the SA storm trooper Heinrich Lang, SA and NSKK men broke into the home of the elderly couple in the morning of November 10th and smashed all the furniture and equipment with axes and hatchets. Abraham Frank was arrested and taken to the Hammelburg jail, where he was forced to sign a declaration that he would emigrate or at least leave town as soon as possible, otherwise he would be sent to the Dachau concentration camp. At the end of December of 1938, Abraham and Malchen Frank moved to the Jewish retirement home in Würzburg, where Abraham Frank died only a few days later, on January 12th, 1939. Siegfried Franks mother Malchen was deported to Theresienstadt in 1941, where she was murdered on April 1st, 1945.

Betty Franks parents Jettchen and Emanuel Levi as well as her sister Frieda were also murdered in the Holocaust. They had fled from Lower Franconia to Lübeck in 1938, after Emmanuel Levi had been accused of a ritual murder in his home town of Unterreppach  a totally fake charge that was, however, fomented by the local Nazis and made life unbearable for the family. Emanuel, Jettchen and Frieda Levi were deported from Lübeck to the Jungfernhof concentration camp near Riga via Bad Oldesloe and Hamburg on December 6th, 1941 and murdered there in March of 1942. Stumbling Stones for them were laid at Fleischhauerstrasse 1 in Lübeck in 1910.

The Jewish Community of Hamburg was forced to sell the Wilhelminenhöhe property to the city of Hamburg in December of 1941, and the purchase price of 56,800 RM had to be deposited in a bank account of which the Community could only dispose with special permission from the Chief Finance Administrator. Betty and Siegfried Frank were forced to move to Grotiusweg 36, where the Hachshara center had been dissolved by the Nazis and the building turned into a "Jews house in the middle of 1941. On July 19th, 1942, Betty and Siegfried Frank were deported from there to Theresienstadt. On the day before their deportation, Siegfried Frank wrote a last message to his son Paul: "Moving to Theresienstadt today. We are in good health. Inform Ruth. Love and kisses, your Parents. From Theresienstadt, the Franks were deported on to Auschwitz more than two years later. There, Siegfried Frank was murdered on September 28th, 1944, his wife on October 28th, 1944.

Their son Paul lived in a kibbutz near Haifa founded by Jews from Austria, Germany and Czechoslovakia in 1938. Paul married in 1945; he and his wife had three children and eleven grandchildren. Ruth Frank had married in England and gone to Australia with her husband. Paul and Ruth Frank only learned about the fate of their parents by their own research. In 1995, the mayor of Hammelburg invited survivors of the Holocaust to visit their home town; Ruth and Paul were among the invited; however, neither was able to follow the invitation.

After the war, the Wilhelminenhöhe property was given to the Jewish Trust Corporation. The Corporation sold it to a merchant from Hamburg-Övelgönne in 1955, who in turn sold it a year and a half later for about three times the price he had paid. Today, the property is privately owned and occupied by a residential building.