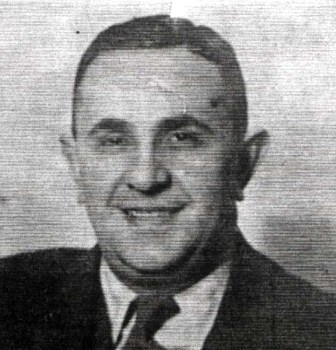 Wolf Jaegermann was born in 1896 in Wischnitz a small town in Bukovina / Rumania which belonged to the Austrian Hungarian Empire. He came as a young boy to Leipzig in 1912 to be trained as a furrier. In World War I he served as a soldier in the Austrian Army. After the war he setteled in Berlin where his parents Joseph Chanes ad mother Reisel born Jaegermann opened a fur shop .

In 1922 he married Regina born Haber who came to Germany from the small town of Dynow in Galicia / Poland. The couple opened their own fur business and worked together in Niederwald strasse. They lived in Berlin-Charlottenburg. Their children Thea and Heinz were born in 1923 and 1924 in Berlin.

The family moved to Hamburg in 1926, where they first lived in 18-22 Schäferkampsallee apartment and then moved into a five-room apartment in the Langen Reihe 83 Their third child, Kurt was born there in 1928. The business expanded in the years before the Nazi Regime and became famous , having clientele from the wealthy part of Hamburg and its surrounding.

After The rise of The Nazi Regime in 1933 , the attitude of the population towards Jews in the Hamburg had changed: Former employees testified during the restitution process in 1955, that the business received many harassments and threats. However, the business was protected from the "Aryanization" process because Wolf never became a German citizen but was a Rumanian citizen holding a Rumanian passport and was partially protected from the persecution that other Jewish businesses suffered from.

In November 1938, Germany's Jewish businesses were destroyed and looted, including the fur store the family had in Hamburg , who was run by Regina's sister Elka Naphtalie. The windows were smashed, looted and destroyed the furniture, which was equipped with valuable furs. The business had to be closed. Jaegermann's family went with Elka Naphtalie to the Rumanian embassy to report the incident and there was the loss of RM,.10000 remembered 1962, the former Consulate staff Else Kosterin

During the November Pogrom the family fur shop in Gänsemarkt 13 was looted and severely damaged . Increasing restrictions on Jewish shop owners resulted in a steady decline in sales. Some of the suppliers refused to deliver furs to the business following the provisions of the Nazi regime. Unannounced inspections by the SS were made frequently , said the former employee Hermann J. later, " this was a common occurrence." Wolf Jaegermann had to sell furs and largely reduced prices and the business suffered losses. The shop in Großen Bleichen 31had to be closed. The family had to move to a smaller apartment in Schenkendorferstarasse. Elka Nafatalie moved to Hamburg with her children and helped run the family fur business and lived with the Jaegermanns.

During these years of persecution Wolf Jaegermann was hit so hard that he developed depression and anxiety. In 1937 he suffered a nervous breakdown.

In 1938 the Jaegermanns managed to send their children away from Germany first the eldest daughter Thea to England in 1938 and Heinz Chanoch to Palestine in 1939. Regina, being a Rumanian citizen and holding a Rumanian passport travelled in August 1939 before the outbreak of war to London to visit her daughter and brother who were in England. When she realized how serious the situation was she asked her sister Elka Naftalie to send her youngest son Kurt to her in London. Her sister Elka Naphtalie managed to send Kurt the youngest son to London in the last train that left Hamburg before the outbreak of the War.
Shortly after Jaegermann's family had to leave the apartment on the orders of the landlord, who wanted to keep the house, "Judenrein". The last address that Wolf Jaegermann lived was in Lenhartzstraße 3 (see "The Jewish Home 'Lenhartzstraße 3", p 438) in Eppendorf

Wolf Jaegermann was then hospitalized in a number of Hospitals and couldn't leave Germany. Until 1941 Elka Nafatalie took care of the family shop which still existed in the Gaense market selling what was left of the fur inventory and taking care of Wolf who was hospitalized and paying his bills. Elka was deported to Riga in December 1941 and following Wolf was sent in the In the end of 1941 to The Heilanstalt Langenhorn were he was interned for almost 2 years. The medical records reveal that he is weight in those years was about 55 KG  for a man who was over 1.80 M tall. !!!

Langenhorn was part of the German Euthanasia program(Aktion T4) and in 1942 the German authorities tried to send Wolf Jaegermann to the in one of the Jewish transports leaving for the death camps in the East but he was declared unfit to travel. Facing this, the German authorities in Hamburg contacted the Rumanian consulate in Hamburg and also the Rumanian Foreign office and after many correspondences they received an authorization to repatriate Wolf Jaegermann to Rumania in August 1943 travelling to the town of Czernowitz. Unfortunately after the Authorization was received the City of Hamburg suffered the great bombardment by the British and someone in the German authorities reversed the decision.

Wolf Jaegermann was sent from Langenhorn to Hadamar Euthanasia mass murder center near Limburg were he was murdered on the 4th of October 1943 probably with a lethal injection. The Jewish community was charged RM340 for the process. His death certificate states: Death certificate No. 1204/1943 of the Registry Office Hadamar. "Wolf Jaegermann, without occupation, Mosaic (Jewish) , address unknown, died on 04.10.1943 at 5 o'clock in Hadamar Mönchsberg 1. The deceased was born on 30.12.1896 in Vignita, Romania,. The deceased was married. Name Wife unknown. unknown father and mother.

Wolf Jaegermann is survived today by his son Chanoch ( Heinz) , His 7 grandchildren and 18 great grandchildren living in Israel and in the United States.