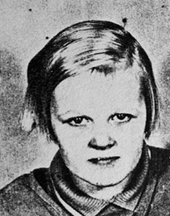 Ilse Caroline Baustian was born shortly before the beginning of the world economic crisis as the second daughter of the metal grinder Willi Baustian and his wife Dora, née Pöhlsen. Her parents were members of the Lutheran Church and had their daughter baptized on 29 Sept. 1929 in the Dankeskirche ("Church of Thanksgiving) in Hamm-Süd.

Ilse Baustian developed more slowly and differently than her sister Carla, who was two years her senior. Only at the age of two, she managed to stand upright and move carefully from her position. She was four years old when she first started expressing herself in speech. However, this did not make her more accessible. She spread a lot of restlessness and often reacted in ways different than commonly expected. With her behavior and, increasingly, with her words, she alienated quite a few fellow human beings. Even her parents and her sister often had the same experience, and the parents were worried because their daughter, who was actually of school age, was not allowed to attend school because the authorities considered her "unfit to attend school.

The situation worsened when Ilse Baustian lost consciousness several times for a short time at the age of seven and nobody knew the reason for this. The last stop on the search for the causes was the hospital of the Alsterdorf Asylum. There she was examined in detail for days without any progress being made. After ten days, Ilse Baustian returned home.

The doctors continued to struggle with an exact diagnosis of the disease from which the girl was suffering. In Nov. 1938, after a thorough examination, the responsible medical officer of the Hamburg welfare office deemed the health problems to be so serious that he considered Ilse Baustians admission to a "Hamburg Institution for the Mentally Ill, Idiots, and Epileptics ("Hamburgische Anstalt für Geisteskranke, Idioten und Epileptiker) to be urgently necessary. The child was no longer "tolerable at home because her "behavior is unpredictable. In his view, Ilse Baustian was "incapable of being educated. The state welfare office then considered the time had come to take further steps.

In Jan. 1939, the girl was admitted to the Alsterdorf Asylum. After the initial examination, Gerhard Kreyenberg, the senior physician of this Protestant institution, believed that he had found the root of all evil by diagnosing "idiocy. The new patient initially left a positive impression on her caregivers: She did not need any help with meals, kept herself clean, showed a good appetite, and overall perceived her surroundings correctly. On the other hand, they also noticed that the ten-year-old girl was restless inside and had problems in dealing with other children and adults.

In the following months, the young patient showed no signs of positive development, as her medical file indicates. On the contrary. An entry dated 20 Dec. 1939 testifies to increasing health problems, which became more and more difficult to control: "The pat.[ient] must be fully cared for in terms of personal hygiene. Occasionally, she lends a bit of a helping hand. She prefers to put away dishes. She does not ask for toys much. She is friendly in company, but as soon as she is unobserved, she scratches, spits, and uses nasty expressions. At night, she has to be strapped in; otherwise she would beat the other patients.

The parents, Dora and Willi Baustian, also registered this development with growing concern. They intensified their contacts with the people in charge at the Alsterdorf Asylum and visited their daughter even more frequently than before in order to strengthen her spirit and nip in the bud any doubts about the hope for a better future. On several occasions, they turned to the management of the Alsterdorf Asylum with requests that their daughter be released home again  or at least be allowed to take shorter or longer leave with her family. Initially, all requests by both parents were rejected due to medical concerns. In the end, as the letters of reply often stated, no one could foresee "whether the child could be kept at home and whether the domestic circumstances would really allow such a change. Only when Ilse Baustians sister Carla had moved out in the meantime to do her mandatory year of service (Pflichtjahr) elsewhere, Dora Baustian was successful with a renewed application for her daughters discharge from the Alsterdorf Asylum. On 10 July 1940, the young patient was released to join her parents in Harburg.

Little is known about the reintegration into her parental home. Dora Baustian apparently tried many things to make the cohabitation bearable. Three months later, she had to admit that the attempt had failed. On 10 Oct. 1940, she saw no other possibility than to ask the institution of the Inner Mission in Alsterdorf for the reintegration of her daughter, as it had become clear that even "with the best intentions in the world, it is not possible [to have her stay] at home.

On 4 Jan. 1941, Ilse Baustian returned to the Alsterdorf Asylum. At first, she often cried out of homesickness. In addition, the records in her medical file show that she was unable to keep herself clean. She recognized some of the girls, but probably did not realize that by then a harsher regime was prevailing in the Alsterdorf Asylum.

Soon after the outbreak of war, the effects of the radicalization of the Nazi policy of eradicating "worthless lives, which had begun with the German invasion of Poland, could no longer be overlooked in this institution of the Inner Mission. After the administration of the Alsterdorf Asylum had already deported their Jewish residents to other institutions in the late 1930s, the notorious registration forms of the new Berlin headquarters, which controlled this killing program, arrived in Alsterdorf. The management of the Alsterdorf Asylum was supposed to report all patients who met certain "inferiority criteria. This was intended to record those who did not perform any work, caused high nursing costs, had no contact with their relatives, had a criminal record, and were "racially different. The Alsterdorf decision-makers reservations about the campaign were not so strong that the questions remained unanswered. In Feb. 1941, 465 registration forms with the requested information were sent back to Berlin and evaluated there. In close cooperation with the Hamburg public health authorities, the coordinating office in Berlin ordered the transfer of 71 Alsterdorf inmates to the Langenhorn "sanatorium and nursing home (Heil- und Pflegeanstalt Langenhorn) in the summer of 1941. A few months later, they were transported from there to the Tiegenhof sanatorium near Posen (today Poznan in Poland), where only one of them survived the war years.

When a part of the Alsterdorf Asylum was destroyed by the heavy Allied air raids on Hamburg in the summer of 1943 and numerous bombed-out persons had to be temporarily accommodated in the unscathed premises, Pastor Lensch took advantage of the opportunity. He contacted the Hamburg health authorities and asked them for quick assistance in reducing the alleged overcrowding. The authority did not hesitate, immediately forwarding the request to the Berlin headquarters. The protagonists there knew how best to remedy the situation and initiated the appropriate measures right away. In Aug. 1943, 469 Alsterdorf patients were transported to other "sanatoria and nursing homes.

Ilse Baustian was also affected by these transfers. On 16 Aug. 1943, she was transported from Alsterdorf to the "State Asylum and Nursing Institution for Mentally Ill and Neuropathic Patients on Steinhof ("Landesheil- und Pflegeanstalt für Geistes- und Nervenkranke am Steinhof) in Vienna together with 227 other girls and women. Many participants in this transport had previously been judged to be extremely high-maintenance, particularly difficult, very low-performance and terminally ill.

Willi and Dora Baustian were very worried when they learned of their daughters transfer to Vienna. In order to gain clarity, they asked the Steinhof administration in writing for further information. From the short reply, they could only conclude that their daughter was doing well and that there was no reason for concern.

The reality was different. The "Steinhof was firmly integrated into the Nazi "euthanasia program. Hans Bertha, the head of the institution, was one of the main protagonists of this extermination of "life unworthy of life ("lebensunwertes Leben) from 1942 onward. At his place of work, he actively contributed toward this goal. The annual mortality rate of his patients rose during his Viennese period of service (19421945), certainly not without his active intervention, from 13.9% in 1941 to 42.5% in 1945. The mass mortality at Steinhof involved a system. Malnutrition, neglect of care, misuse of medication, and failure to treat diseases were commonplace there.

The shock about the reception in Vienna and the life in the new surroundings was great for all concerned. There is nothing to suggest that Ilse Baustian experienced this change of location differently. At least four times, she was transferred to other wards in short succession. The spatial reorientation was just as difficult for her and for all other affected persons as the change to different staff constellations. Even worse than the consequences of these multiple transfers to other wards of the Vienna sanatorium were for Ilse Baustian the effects of the poor nutrition that was commonplace there. At her arrival, she weighed 49 kilograms (about 108 lbs); a year and a half later, she weighed only 34 kg (approx. 75 lbs).

Since Ilse Baustian could "neither read nor write, her parents were dependent on information from other people. They hoped to receive more particulars from sanatorium management. However, the brief feedbacks left more questions than answers. In time, Willi and Dora Baustian accepted the situation as it was. This changed again temporarily when they received the news in Oct. 1944 that their daughters physical condition had deteriorated considerably in the course of malignant anemia. At this point, Dora Baustian wanted to see that everything was all right and visit her daughter in Vienna, which she then refrained from doing, as Hans Bertha, the institutional head, pointed out to her that in view of the war situation, there were almost no overnight accommodations in Vienna.

Their daughter did not recover from the consequences of this blood disease. Her state of health remained critical. It even deteriorated at the beginning of 1945. In Apr. 1945, according to medical records, severe diarrhea resulted in another serious setback. The entry ends with the remark, "...is deteriorating rapidly.

Six days later, Ilse Baustian was dead, without her parents being informed immediately. For months, they tried in vain to obtain more detailed information about the subsequent fate of their daughter. Only 13 months later did they find out for certain.

Overall, 196 Alsterdorf patients died in this Viennese institution after their deportation from Hamburg. For years, the administration of this institution concealed its Nazi history in the post-war years. More or less cavalierly, managing staff repeatedly declared that all these women had died a natural death. This only changed in 1994 when ten jars of preparations were suddenly discovered there, which had been taken from the brains of former Alsterdorf patients. The subsequent efforts to release the mortal remains dragged on for months and only led to success after persistent struggle.

On 8 May 1996, the urns of ten Alsterdorf "euthanasia victims who had been murdered in Vienna were solemnly buried in the burial and memorial site of the Hans and Sophie Scholl Foundation (Ehrenfeld der Geschwister-Scholl-Stiftung) at the Ohlsdorf Cemetery, in place of all the others. Six years later  on 28 Apr. 2002  a memorial for all "euthanasia victims of the former state "sanatorium and nursing home for the mentally ill "Am Steinhof was dedicated at the Vienna Central Cemetery.