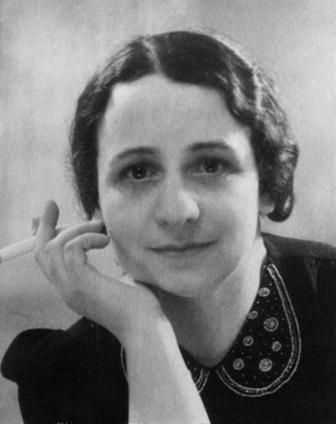 Hertha Feiner-Asmus, born 8 May 1896 in Hamburg, probable date of death 12 Mar. 1943 by suicide during the transport to Auschwitz

Hertha Feiner was the daughter of the well-known pedagogue Josef Feiner and the sister of Hermann Feiner (see Biographies: Hermann Feiner). She studied pedagogy and got her first job in 1923 at a boarding school in Bad Harzburg. She returned to Hamburg in 1924 and taught at various schools, including the new Meerwein Experimental School in the Jarrestadt district of Winterhude.

In 1924 she married the non-Jewish publisher Johannes Asmus. Their daughters Inge and Marion were born in 1925 and 1927. Inge was enrolled at the Meerweinstraße school in 1931. The marriage was not happy, and the couple divorced in 1933. The children remained with their mother.

Since she was of Jewish heritage, Hertha Feiner was released from service with the Hamburg school system in early April 1933. Her daughter Inge was also expelled from her school. Soon afterwards, Hertha was working as a substitute teacher at the Johnsallee Jewish School. Despite the difficult conditions, she tried to provide her daughters with a carefree childhood. In their presence she exuded courage and optimism.

In April 1935 she was offered a job at a Jewish school in Berlin, and she and her children moved there. She was at the Jüdische Waldschule in Grunewald until mid-1938, then transferred to a school near the Jewish community center on Fasanenstraße. She continued to try to lead a normal life with her daughters, and to shelter them from the growing Nazi persecution. The November Pogrom in 1938, however, prompted her to find a way to get her children out of the country. With the help of the childrens father, the girls were enrolled at a boarding school in Switzerland in early 1939. They visited their mother in Berlin in the summer of 1939, but after that they were only able to stay in contact through letters and an occasional telephone call. Hertha nevertheless remained actively interested in her daughters welfare. She was concerned about how they were doing at school, and tried to give them help and advice whenever she could.

Hertha Feiners living conditions in Berlin became more and more difficult, especially after the war broke out in 1939. Jews were subject to a curfew, and they were only allowed to shop in certain stores. The Jewish Community was not always able to pay her small salary on time, so she took boarders into her apartment. Still, she enjoyed the "privilege of being able to keep her own apartment, since her "half-Jewish children were still considered part of her household. In the spring of 1940 she began planning her emigration to the US, but she was unable to leave Germany before the ban on emigration was issued in October 1941.

In the early 1940s, Jewish schools were subjected to ever tighter restrictions, and many teachers lost their jobs. Hertha Feiner was let go in 1941, and she was assigned to work for the Jewish Community. There she had to work on the administrative preparations for deportations. Beginning in the summer of 1942 she tried to bring at least her younger daughter back from the boarding school in Switzerland to live with her, since the presence of a "half-Jewish child in her home would protect her from deportation. She discovered that her ex-husband, with the help of the schools headmaster Harald Baruschke, was attempting to cut off communication between her and her daughters. In a desperate letter, which she was able to smuggle to the children, she wrote:

"If you ever want to see me again, one of you has to come live with me as soon as possible. Entreat Harald [Baruschke] to get you a visa, or at least one of you  there are visas, especially for you since your Daddy is a soldier. He only has to agree to it, because as far as I know and from what I have been able to learn its in his hands  if we cant manage to reunite now, there is no hope for later. Only your action will prove your love!

In early 1943, the childrens father and his second wife Hermine Asmus forbad all written communication between Hertha Feiner and her daughters. Her last letter from Berlin was not given to them.

Hertha Feiner was arrested on 10 March 1943 and put on a transport to Auschwitz on 12 March 1943. While on the train she took her life with a cyanide capsule that a friend, who was a pharmacist, had given her.
"Hertha-Feiner-Asmus-Stieg, a street in the Jarrestadt in Winterhude, was dedicated in 1992. A plaque and memorial at the Meerweinstraße school are dedicated to Hertha Feiner and her colleague Julia Cohn, who was also murdered by the Nazis.