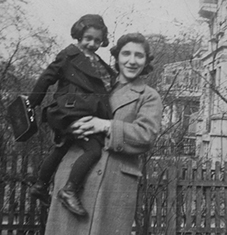 Hugo Hermann Moritz lived with his wife Erna and their daughters Judith Johanna and Margot Helene at Parkallee 18 in Hamburgs Harvestehude quarter until 12 Oct. 1937. He  and thus his family  belonged to the Hamburg German-Israelitic Community since 26 Mar. 1923.

Hugo Hermann Moritz was the son of Martin Moritz (born on 10 Dec. 1855) and Hedwig Moritz (née Feuerwanger, born on 12 Sept. 1865,) and came from Mainz. In Jewish tradition, he carried the name of his grandfather Hermann. In Mainz, he had lived in a household with his parents and his grandmother Regine Helene. In addition, Frederike Hermine Sara, born two years after his parents marriage on 19 Nov. 1887, probably Hugos sister, lived there as well. Further details on Hugo Hermann Moritzs family, except for the death of Martin Moritz on 25 Mar. 1935 in Mainz, are not available. Moreover, it is unknown when exactly he moved to Hamburg.

Hugo Hermann Moritz worked in his father-in-laws company as a "manufacturer. According to his brother-in-law John, who also worked there, the company was successful and had good domestic and foreign connections.

Alfred Mathiason died at the age of 75 on 25 May 1934. He was buried next to his wife Martha at the Jewish Cemetery of Hamburgs Ohlsdorf quarter.

His son John had two sons with his first wife Käthe (née Freudenthal). After falling ill with schizophrenia, she was treated at the St. Paulus Asylum in Bonn. Later, she became a victim of the so-called "euthanasia.

In 1936, John left the German Reich without his wife, who probably did not receive a visa because of her illness, but with their joint children Mathias Joachim (born on 18 Feb. 1926) and Ernst (born 4 on July 1927) and emigrated to São Paulo. There he married his second wife Katerina (née Gut) in 1941. John died of cancer on 27 Apr. 1957.

Hugo Hermann Moritz and his family had stayed behind in Hamburg. During the November Pogrom in 1938, Hugo Hermann was arrested and imprisoned in the Sachsenhausen concentration camp. He remained there until 23 Nov. 1938.

In 1938/39, the Moritz family had to leave Parkstrasse 18, where according to John Mathiason, they were very well furnished with salon furniture and owned porcelain heirlooms. They were forced to move to a so-called "Jews house ("Judenhaus) at Dillstrasse 15. They lived there until their deportation.

On 19 July 1942, the family was deported from Hamburg to Theresienstadt.
On 12 Oct. 1944, the sisters Judith Johanna and Margot Helene were further deported to Auschwitz.

Their parents followed on 23 Oct. 1944. All were probably murdered immediately after their arrival.
The entire family was declared dead at the end of the war.