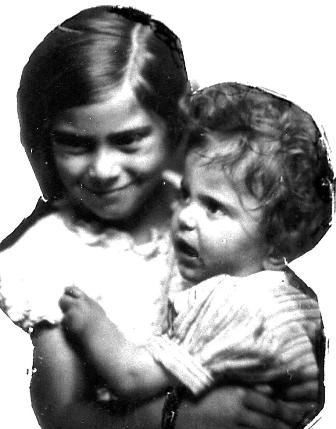 Else Eisenstein was born as the daughter of the carpenter Gustav Eisenstein and his wife Emmi, née Meyer, in Dortmund. The Eisenstein couple had two more children, Hildegard and Günther. After attending the eight-grade elementary school (Volksschule), Else trained to become a tailor.

In 1930, Else Eisenstein left her hometown and moved to Göttingen. On 16 Jan. 1931, her first daughter, Ruth, was born there. The father of the child is not known. The mother and daughter ended up relocating from Göttingen to Hamburg, where they were officially registered with the authorities as of 1934. Their first address was at Steindamm 12. In Hamburg, Else initially found employment as a tailor and later worked as a domestic help. This is where Else Eisenstein met the worker Erwin Albert Carl Uterhardt. The two fell in love and they got married in a civil ceremony on 20 July 1935.

Erwin Uterhardt was a Protestant. The family had to move frequently. Thus, at first they lived at Heimhuderstrasse 27, then at Hammer Landstrasse 17, on Isestrasse, Angerstrasse, and, as of 25 Oct. 1939, at Heitmannstrasse 68, their last address in Hamburg. Ruth Eisenstein was enrolled in the eight-grade girls elementary school (Mädchenvolksschule) at Angerstrasse 33 in 1937 and was forced to change to the Jewish girls school two years later. Erwin and Else also had children together: Their daughter Edith Ilse was born on 15 Mar. 1937, and a second daughter, Alice, arrived on 13 Sept. 1940. Else Uterhardt was unemployed since 1938 and accordingly, the familys financial situation was difficult.

The marriage of Erwin and Else failed, ending in divorce on 21 Feb.1941. Erwin Uterhardt retained custody for both children. Edith spent parts of her childhood and adolescence in childrens homes. Alice lived with a foster family in Hamburg until her marriage in 1966.

On 27 June 1941, Else married the Jewish unskilled construction worker Karl Blum and moved in with him. The witnesses to the marriage were Siegfried Rosenblum and Max Piltz. Karl Blum was a native of Idstein in Hessen and the son of the married couple Jonas and Zerline Blum, née Goldschmidt.

Else Blums last place of work was the Stein jute plant in Bahrenfeld, where she sewed together jute sacks. On 8 Nov. 1941, Else and Ruth Eisenstein were deported to the ghetto in Minsk. Karl Blum followed them ten days later, on 8 Nov. None of them returned.

The witnesses to Karl and Else Blums marriage were also on the transport from Hamburg to Minsk on 8 Nov. 1941. Both Siegfried Rosenblum and Max Piltz are considered missing since then.

Elses parents, Gustav and Emmy Eisenstein, also perished in the Holocaust. They were deported on 27 Jan. 1942 from Dortmund to the ghetto in Riga. Erwin and Elses common daughters, Edith and Alice, survived the Holocaust.