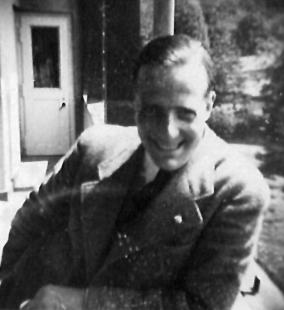 Fritz Rudolf Rappolt was the first child of the textile merchant Franz Rappolt and his wife Charlotte, nee Ehrlich, the daughter of a Breslau businessman. He was born in Berlin where his father was in charge of the Berlin office of Rappolt & Söhne. Three years later the Rappolts, a Christian family of Jewish origin, moved to Hamburg.

Fritz was raised in a well-off family but remained for his life a worry for his parents. His schooling was not successful: he received poor grades and escaped into a phantasy world. His parents consulted Professor Eugen Fraenkel (s. Fraenkel, Marie). He changed schools many times but finally with the support of a home tutor succeed in sitting for the emergency higher school certificate in 1918 at the Kirchenpauer-Gymnasium.

Fritz Rappolt was then immediately called up for military training at the Prussian (Lauenburg) Imperial Fuß-Artillerie-Regiment 20 in Bahrenfeld near Hamburg. When the war ended he was based at the fortress city Neu-Breisach/Neuf-Brisach in Alsass.

In October 1919 Fritz Rappolt, despite his parents misgivings, began to study chemistry. His first semester was at Würzburg. He jointed a duelling club but refused to duel which resulted in his rapid expulsion. At the end of his studies, which as with his schooling took some time, he passed, with difficulty his exams at the University of Hamburg. He failed, however, to obtain his doctorate, falsified his results and was forced to leave the University of Hamburg. At his second attempt in Göttingen his written thesis was accepted but he failed the oral examination. In July 1928 his parents fetched him back to Hamburg. His father, Franz Rappolt, then became an owner of a newly established chemical factory with the aim of putting his son into a senior management position. This attempt failed and Fritz Rappolt was fired. He was also fired from a Berlin oil trader. His parents, who were concerned about Fritz, consulted doctors in Berlin and Hamburg.

The Hamburg neurologist, Dr. Werner Villinger, who was also a consultant medical practitioner at the "Rauhe Haus" in Hamburg-Hamm, diagnosed the following in March 1931: "Psychologically he has a weak will, interested in little that is intellectual, has little talent but all the more for that a young man, good at communicating, with all the trappings of a young diplomat (as he imagines one to be), without the single-mindedness that is necessary, without any real ambition, almost without honour, a pleasant chatterer in a coffee shop  who  without any self-criticism dares to try things (leading management positions in industry etc) for which he has not the slightest talent. It is only natural that he constantly fails. ()"

Dr. Villinger suggested to the parents in March 1931, "that for the next few years he should work in a strictly regulated way  for example in an institution, so that he at first is protected from himself (he was almost caught has a high-class swindler) and then see whether he can, under the appropriate supervision, is capable of further development". As a result he was sent to one of "Rauhe Hauses" facilities at Gut Wulksfelde to the north of Hamburg. After a year he was transferred to the "Rauhe Hauses advertising agency, working at first in the office and later as an advertiser. It must have been now that an incident occurred which was punishable under section 175 of the Crimes Act (homosexual offence). Fritz Rappolt was sacked. At the same time he was sentenced by the court to 6 months gaol, suspended on a five year good behaviour bond. In 1933 he was put under the control of a guardian. It is not known whether this had something to do with his conviction. Certainly the files are silent. It could also be that this father, in order to protect him from a prison sentence, arranged for a guardian. At any rate his father took over the role of guardian. His medical conditions as diagnosed as psychopathic. Until 1934 Fritz Rappolt was held at the Kattendorf Hof in Kaltenkirchen/Holstein, a facility of the "Raue Haus". Due to the efforts of Dr. Villinger he was transferred to the "Moorpension" in Freistatt near Diepholz which was part of the Bodelschwinghsche Anstalten. After around three quarters of a year on the insistence of his parents he was transferred to the "Bethel-Anstalten, Heilanstalt für gemütskranke Herren" (Bielefeld). Here he could work in a second hand book shop but used this position to give away the books.

The Jewish medical practitioner, Dr. Adolf Rosenthal, with whom the Rappolt couple were friends, represented their and Fritz interests in dealings with Bethel. In November 1935 Fritz Rappolt moved to the Webschule and was given a loom in his room. In 1937 Dr. Rosenthal with his wife and two children emigrated to the USA. The parents in addition to the sporadic problems that Fritz Rapplot caused now had to worry about the state restrictions on the mentally ill and the separation of Jewish patients. The relevant measures introduced by the National Socialist state restricted every day activities in Bethel. The medical files of Fritz Rappolt state the following: "From 3.12. (1938) the patient is not permitted to leave the institution as part of the general measure against Jews." The background to this step was that Jewish patients had to be stopped from committing "racial defilement. The parents now considered whether they should move their son to an institution either in Switzerland, Holland, Denmark or Sweden. However, his guardianship proved an obstacle. Even "placement in a suitable institution in Germany for Jews appears to be very difficult", said Dr. Villinger on 1 October 1938, who since January 1934 had been a Professor in Bethel. The parents search for a suitable institution was in vain. A medical report in Bethel at the end of 1938 stated that Fritz Rappolt: "suffers from a lack of intellect with psychopathic traits and over self-confidence". Fritz Rappolt was released from Bethel in September 1940 because mentally ill Jews could no longer be treated with mentally ill pure-bred Germans in institutions. It is true that Fritz Rappolt was not mentally ill but the aim of the decree was clear and it was likely that in Bethel that there would only be care for Germans.

On 1 September 1940 Fritz Rappolt returned to his parents in Hamburg, who in the meantime had rented an apartment at 10 Haynstraße (Eppendorf). Fritz Rappolt no longer had his own room and slept on the couch in a open living/dining room. His father tried to find some meaningful activity for his son, which he took up in October 1940. In letters to America he indicated that he worked as a gardener, possibly at Ohlsdorf Cemetery. On Sundays he often went to family friends to play shellac records on his gramophone  Jews were already barred from owning radios and attending the opera and the theatre.

On 6 March 1941 his mother committed suicide. Franz Rappolt was worried how his son would react but he reacted peacefully.
Fritz Rappolts workday began at 6.30 am and ended at 7.30pm. His father therefore bought him a bicycle. As Fritz Rappolt was good at physical work  during the working year he worked 60 hours a week  his father hoped at the end of April 1941, that perhaps there was a possibility for his son to emigrate: "As a farm worker he would be his own man and could feed himself." At the end of May 1941 he asked again his son Ernst in the USA about his son Fritz prospects: "I have not received an answer from you as to whether this is the possibility for Fritz to work as a farmer in the USA. His training here is the right training."

However the father was ignoring the obstacle to emigration being the guardianship. When it appeared likely that that emigration was possible for him he tried to find a successor guardian for his son. That was to have been Dr. Walter Rudolphi who was assigned to the Hamburg Superior Court and had been a member of the governing body of the Jewish Religious Association since 1939. Franz Rappolt knew him personally and trusted him: "R. is wonderful.  He is the right man who has the necessary interest and understanding. However, as Franz Rappolt could not leave the country the guardianship remained with him.

Regardless of the problems Fritz Rappolt himself tried to emigrate and wrote to his brother Ernst in September 1941 that he was trying to obtain a visa via the Columbian consulate. This was probably more wishful thinking than reality. Two months later he had to move into at former boarding house at 36 Moorweidenstraße from where he was deported to the Minsk Ghetto.

His father wrote to his son Ernst in a guarded manner: "Our Fritz has gone to the Eastern Front and is very confident. I admire him. You can imagine that in the last period I have had little peace. The father did receive news of his arrival ("On the first day I received a nice card but otherwise have heard nothing) in Minsk. It is said that Fritz was very active in the ghettos self-administration and "had been in good form. However, attempts by the Edgar Franck, the Minsk Jewish Elder and his assistants, including Fritz Rappolt, to send information to Hamburg by means of a policeman stationed there, was discovered. The punishment was severe: on 8 February 1942 the men were arrested and on 13. April 1942 shot by SS-Obersturmführer Burckhardt in the camps courtyard.