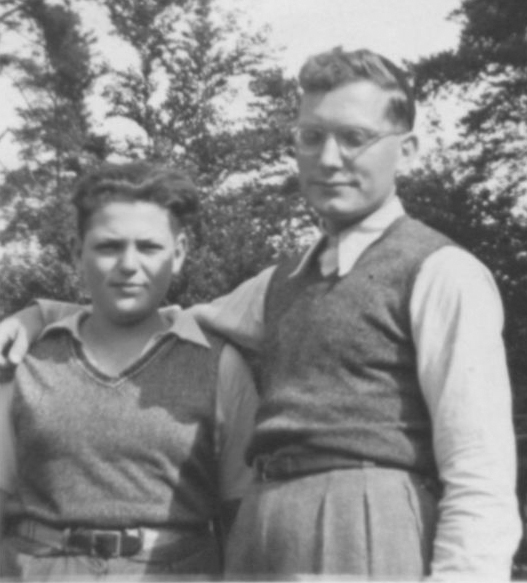 Julius Hamburgers parents were Fritz Hamburger and his wife Franziska, née Lehmann. Initially, Julius graduated with a university study certificate from the Philanthropin, the Jewish reform high school in Frankfurt am Main, on 24 March 1930. From 1 May 1930 until 29 February 1932, he attended the Pedagogical Academy in Frankfurt. As early as 4 January 1932, he was admitted to the first examination for a teaching position at elementary schools and was tasked with a written exercise on "Martin Bubers ethical-pedagogical thought. He took the oral examination on 18 March 1932. He completed both successfully, and for educational studies in general, he received a grade of "good, and for "professional teaching a grade of "satisfactory. After these results and after the evaluation of his work in the Pedagogical Academy, he passed his teacher training with "good. Simultaneously, he acquired a teaching certificate for Jewish religious instruction and was authorized to teach music.

In addition, Julius Hamburger furthered his education by participation in a working group in the field of philosophy. He also attended lectures at the University of Frankfurt on "German ethnic studies, as well as lectures on the Jewish religious philosopher Martin Buber. At the Hoffman Yeshiva in Frankfurt, a Jewish university for the study of the Torah and Talmud, he deepened his knowledge of these scriptures.

From Easter of 1932 until January 1933, he taught at two Frankfurt city elementary schools. Thereafter, he was called upon to teach at the Talmud Torah School in Burgreppach, Lower Franconia, where he worked until December 1937. As of January 1938, he was an educator in the Jewish childrens home "Awaha in Berlin, which he left by August of the same year, in order to take his second teachers examination at one of the schools of the Berlin Jewish Congregation.

On 4 August 1938, Julius Hamburger applied from Berlin for a teaching position at the Hamburg Talmud Torah School. He taught there from 15 August 1938, for which the school needed to get permission from the School Administration of the City of Hamburg and then had to inform the state police. He was employed only from month to month, as is attested by the surviving school documents, as well as by the lists in which he signed for the monthly cash payments of his salary. A reason for this may have been that many teachers fled Germany on short notice; given the increasing pressure of persecution, such a pay procedure might have made their emigration easier.

In March 1940, the Talmud Torah School presented Julius Hamburger with a citation that reflected his high degree of pedagogical competence. It acknowledged his "superior conscientiousness and excellent pedagogical skill and that his "vivid and stimulating teaching, allowed students in all fields to acquire "solid knowledge. Moreover, he also took pains "in his personal interactions with his pupils to act as a friend and comrade, thereby "winning their full confidence.

In April 1939, the Talmud Torah School merged with the Karolinenstrasse Israelite Girls School. Because the University for Continuing Teacher Education laid claim to the building at Grindelhof "immediately, the unified schools moved in September 1939 back to Karolinenstrasse. In 1940, there were still 23 teachers working with 415 pupils (233 boys and 182 girls).

Julius Hamburger taught not only at the Talmud Torah School but took on, in 1940, the religious supervision of the children of the Paulinen Foundation Girls Orphanage at Laufgraben 37. For this he obtained in April 1940 a pass for the school which stated that it was permitted to him "in agreement with the Secret State Police (Chief Inspector Göttsche) that during the summer months, after 8 pm "on Friday evenings and on the evenings before holidays to be on the streets, in order to get from Laufgraben Strasse to his apartment on Schlüterstrasse. This pass was required because Jews, after 25 September 1939, were not permitted to leave their homes after 8 pm.

A similar certificate was again required of Julius Hamburger three months later, because he, as "the air raid warden representative for the school building was now pulled into an expanded self-defense as a fire guard. For this he had to be on the streets after 9 pm and thus also needed a special pass.

On 27 April 1941, Max Plaut of the Jewish Religious Association of Hamburg informed Julius Hamburger, "at the behest of the Reich Association of Jews in Germany, and as a consequence of austerity measures ordered by the authorities, that he would be let go on 30 June 1941, that is, at the end of the school year 1940-1941. Following this, the congregational administration employed him as an educator in the orphanage at Papendamm 3. Until that point he had been a sub-lessee with Seligmann at Schlüterstrasse 63; now he moved into the orphanage. With the remaining children in the orphanage as well as all his co-workers, Julius Hamburger was deported to Auschwitz on 11 July 1942 and there murdered. He was 31 years old.