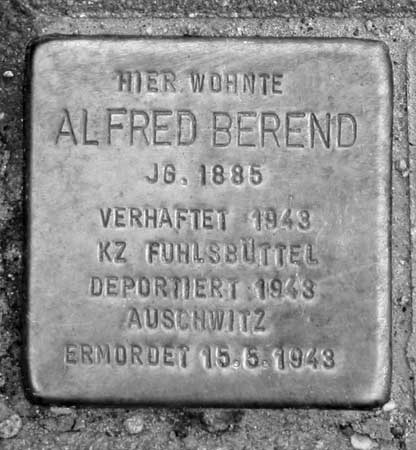 "Due to a petition with Reich Governor (Reichsstatthalter) Kaufmann, my father obtained the favor of being able to work full-time again. In 1940, he was once again able to earn an income. This is what Dennis-Wolfgang Berend stated for the record on 1 May 1953.

His father, Alfred Berend, born on 15 Sept. 1885 in Altona, was a merchant. In 1914, he started up his own business in Hamburg, took over the management of a company in Cologne as a salaried employee in 1922, and returned to Hamburg in 1927. He worked as a publishing representative and an advertising broker.

Alfred Berend was married to an "Aryan woman, Hedwig, née Retzlaff, born on 2 Jan. 1893. Both their sons were born in Hamburg, Horst on 19 Aug. 1919, and Wolfgang on 1 Sept. 1927; he would later go by the name of Dennis. Alfred Berend lived in a "privileged "mixed marriage.

After 1933, periods of gainful employment alternated with unemployment. The family moved twice because of unbearable harassment by Nazi followers prior to finding a rented apartment at Hirtenstraße 56 with an Italian named Pastorino, where they were able to live until the destruction wreaked by the firestorm of 1943.

Alfred Berend attended the synagogue, though not raising his sons religiously. In 1933, he asked the Jewish Community for assistance, but he was refused on the grounds that he was married to a Christian. In his reply to this decision, he emphasized that he had been happily married with her for 17 years and showed himself astonished at "not being regarded as a full-fledged Jew. A brother-in-law living in the USA helped out.

Alfred Berend intended to emigrate with his family but his wife hesitated. The older son Horst at first served in the Wehrmacht but was subsequently dismissed as a "half-Jew and had to perform forced labor.

In 1938, the dismissal from Bruno Sachse Publishers in Hamburg marked the end of Alfred Berends last employment until a new opportunity opened up in 1940: Hedwig Berend registered a business as a publishing representative and advertising broker with the reference that she was taking over her husbands enterprise. The latter now worked in his wifes company, though only in the office. They made a decent living in 1941 and 1942.

In addition to general reprisals, tensions emerged from the maternal grandmother who was a National Socialist. The family was constantly confronted with anti-Semitic reproaches by neighbors, teachers, and playmates. Despite all adversities, Wolfgang attended Kirchenpauer-Oberrealschule (a secondary school without Latin) until 1943; then he was drafted for factory work, among others, at the "Olympia typewriter works. He left Germany after the war, as did his brother Horst.

On 27 Feb. 1943, Alfred Berend was taken into "protective custody by the Gestapo and transported to the Fuhlsbüttel concentration camp. Interventions by his wife and the older brother, who was serving in the Wehrmacht, were in vain. Alfred Berend was deported to Auschwitz on 22 Apr. 1943 and died there on 15 May 1943. On the death list of 1943, he was noted as number 1937. The death certificate issued by the Auschwitz office of records was dated 15 June 1943.

Hedwig Berend stayed in Germany and died in Hamburg in 1967.