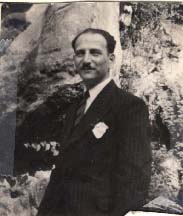 Elsa Paulina Bettelheim, née Frank, was born on 25 Jan. 1884 in Manchester/England. Her parents were Max and Eva Frank, née Schoenfeld, born on 28 Feb. 1859 in Sandersleben; the family was Jewish. The mother, Eva Frank, lived in Leipzig since at least 1914. At what time Elsa Bettelheim came to Germany and Hamburg, respectively, is not known.

Paul Bettelheim was born on 7 May 1889 in Vienna. He had Austrian citizenship. His parents were Julius Bettelheim and Ernestine Bettelheim, née Schick. Paul Bettelheim had a younger brother, Martin, born on 13 Feb. 1894 in Vienna. This family, too, was Jewish. They moved to Hamburg at the beginning of the century. There, father Julius Bettelheim worked as an advertising dispatch clerk at Heinrich Eisler Annoncen-Expedition GmbH located at Rothenbaumchaussee 5. He died in 1926 and transferred his customers to one of his sons, probably Paul Bettelheim. His widow Ernestine moved to Vienna in 1930. Martin Bettelheim married Bertha Falk, born on 1 Feb. 1895; they emigrated together with their three children to Paris on 27 Dec. 1935.

Paul and Elsa Bettelheim got married on 29 July 1914 in Hamburg-Uhlenhorst. Because of the marriage, Elsa acquired her husbands Austrian citizenship. Initially, they did not join the German-Israelitic Community.

The marriage certificate lists Paul Bettelheims occupation as newspaper publisher. In 1900, he had registered a business for the first time as a merchant  an agency business. Since 1910 he was, like his father, working for the Heinrich Eisler Company as an agent in advertising. Paul Bettelheim fought in the First World War as a soldier in the Austrian army. After the war, he returned to Hamburg before the end of 1918. The family was comfortably off, living in a large apartment on Marienthaler Straße.

The son of Mr. and Mrs. Paul and Elsa Bettelheim, Walter Max Bettelheim, born on 29 Jan. 1921 in Hamburg-Hamm, attended the school at Burgstraße 35. Elsa Bettelheim was very involved as a mother in everyday school life; for instance, she gave English lessons in an honorary capacity. Walter Bettelheim had to leave the school in 1935, i.e. at the age of just 14 years, due to the mounting anti-Semitism. For this reason, he was also unable to transfer to the schools so-called Oberbau (senior grades of elementary school) to complete a one-year graduating class with the intermediate secondary school certificate. Instead he began a commercial apprenticeship at the Jewish Blau & Schindler Company, staying there until the company owner emigrated in 1938.

Paul Bettelheim emigrated to France in 1933. The files of the Jewish Community, on the other hand, indicate that he emigrated to London on 5 July 1933. How this misinformation came about or what purpose it may have served is not known. In France, Paul Bettelheim tried in vain to become established economically. For this reason, he was also unable to realize his plan to have his wife and 12-year-old son join him soon.

Following her husbands departure, Elsa Bettelheim had to take care of her and her sons upkeep on her own. She had given up the large apartment. On 1 Jan. 1934, she joined the German-Israelitic Community. Elsa Bettelheim apparently worked as an English teacher, probably giving private lessons. She moved with her mother, Eva Frank, born on 28 Feb. 1859, to Hallerstraße 52 and then to Parkallee 11. The mother died there on 16 Apr. 1936. According to her sons recollections, in the end Elsa Bettelheim occupied only a one-room apartment. The documents of the State Archive indicate that Elsa Bettelheim was a subtenant from 26 Apr. 1937 to 6 May 1941, working as a domestic.

Starting with the beginning of his apprenticeship in 1935, their son Walter was listed as a member of the Jewish Community. He lived as a subtenant at various addresses.

In 1938 or 1939, Paul Bettelheim managed to have his son join him in France. For Walter, too, the Jewish Community indicated incorrectly that he had emigrated to England.

Elsa Bettelheim did not receive a visa for France. She stayed behind alone and under most difficult circumstances in Hamburg. On 6 Dec. 1941, she was deported from Grindelallee 23 to Riga. The traces of her life disappear there.

During the war, Paul Bettelheim and his son Walter were interned in France as foreign nationals. After the German-French armistice in June 1940, Paul Bettelheim was released, but his son Walter was detained until 29 Oct. 1940 in the French St. Cyprien camp, then until 6 Apr. 1941 in the Gurs internment camp, and subsequently for two additional months at Camps de Milles. Paul Bettelheim succeeded in having his son released in June or July 1941. Afterwards they lived together in Nice.

In the course of the large-scale roundups aimed at Jews, Walter Bettelheim was arrested on 25 Aug. 1942, but a French policeman helped him escape. Friends hid him for two years in their apartment until the liberation in Aug. 1944. He was 23 years old at the time.

His father Paul Bettelheim was arrested in Nice by the Germans in Oct. 1943. He was detained for five days at the Drancy transit camp. On 28 Oct. 1943, at the same time as his sister-in-law, Bertha Bettelheim, he was deported from there to Auschwitz and murdered there. His last known place of residence was Nice, 13, rue de Nicollis.

The son, Walter Bettelheim, stayed in France, taking on French citizenship after the war and changing his name to Walter Max Israel Bettelin. He got married in 1945 and became the father of a daughter in 1949.