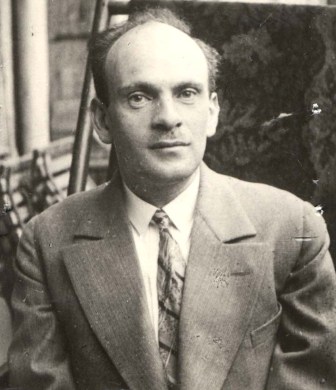 Music played a large part in the lives of many Jewish families in Hamburg. Attending concerts and playing music at home were favorite activities, and parents ensured that their children learned to play an instrument.

Martin Cobliner, a respected piano teacher, had lived as a boarder with Dr. Salomon Klein on the fourth floor of the building at Grindelallee 81 since 1937 1). He had come to Hamburg around 1921, and had first worked in an office before he obtained his music teaching certificate in 1925. He intended to give private music lessons rather than run a music school. 2)

Little is known about Martin Cobliner, other than that he was born on 9 December 1892 to Isaac and Ottilie Cobliner in Posen. According to his passport, he was of medium height, had dark blonde hair and blue eyes. 3)

On 10 November 1938, when the Hamburg Gestapo and police swarmed out to arrest "as many healthy, male, non-elderly Jews as would fit into the prisons 4), two police officers stormed the fourth floor of the building at Grindelallee 81 to arrest Dr. Klein. They submitted the following report on the same day: 5)

"The orders stated that Dr. Salomon Klein, listed as No. 381, born 3 Feb. 1898 in Chrzanow, residing at Grindelallee 81 III., was to be arrested today at 7:15 a.m. by Officers Balhorn and Heck. Klein, however, proved to be suffering from a serious psychological condtion, and the officers desisted from arresting him. When the apartment was searched, a locked door was found, with the key in the lock from the inside. When asked, Frau Klein explained that this room was rented to the unmarried musician and Jew Martin Cobliner, born 9 Dec. 1892 in Posen, resident at this address since 2 Mar. 1937.
Frau Klein could not say, however, whether Cobliner was in the room or if he had already gone to the synagogue, as he did nearly every morning.

We demanded loudly that the door be opened. Despite several attempts by both us and Frau Klein, the door was not opened. In fact, we noticed that the key was turned again from the inside. It was therefore obvious that Cobliner was unwilling to open the door. After several more demands that the door be opened, Frau Klein hammered in an approximately 10 cm disc over the door handle.

We then opened the door and saw that Cobliner had jumped out of the window. He was only lightly clothed. The 25th precinct was immediately contacted and an ambulance was called to transport Cobliner to the Hafenkrankenhaus.

Cobliner showed no life signs. The Hafenkrankenhaus pronounced him dead on arrival. A search of his room produced no incriminating evidence. Cobliners registration papers were found, and are attached. The room was locked and sealed (key enclosed). Time constraints prevent further investigation into the suicide of Cobliner. Commissioner Struwe was informed by telephone.