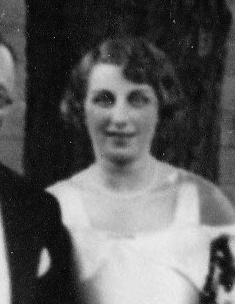 Ellen Marlene Josefa Haas lived with her parents Charlotte (Lotte) Johanna Haas and Harry Haas at Isestraße 125. Charlotte was the only child of Josef Fürst and his wife Pauline (Paula), née Flaschner. She was a native of Hamburg and was reputed to have been very beautiful.

Harry Haas was born on 7 September 1891 in Borken, Westphalia. He had seven brothers and sisters. The Haas family were very well-to-do. Moses Haas, Harrys father, had founded a wood veneer factory together with his brother Jonas. They were so successful that they were able to establish branch offices in Paris and Hamburg.

Harry Haas was sent to Hamburg to run the company there. The business was located at Billstraße 158. Harrys first address in Hamburg was Rothenbaumchaussee 195. Charlotte and Harry married at the registry office in St. Pauli on 22 January 1932.

After these events the family decided to emigrate to London. Harry Haas intended to work there in the wood business. Harry Haas is thought to have resided in Holland since 20 March 1939 (at the Reuver refugee camp). The Borken internet site notes that at first, only the male family members fled Germany, since they didnt think anything would happen to the women and children.

After Harrys emigration, Charlotte remained in Hamburg with her daughter and her mother. In April 1939 she submitted an application for emigration. In a letter to the Chief Tax Authority dated 19 April 1939, she stated that she had already sold some of her household furnishings and rented a smaller apartment. She requested clearance for the transport of the rest of her belongings, which were stored with the Wiese transport company. At this point Charlotte and her daughter were boarding with the Konrad family at Hagedornstraße 49. The Customs Office refused clearance on some of her belongings, because they suspected she planned to sell them abroad. The Customs Office report of 3 May 1939 states: "Denial of the objects: typewriter, radio, canned food, wine, furniture, clothing and linens because of possible sale abroad. Wine and canned food purchased in large quantities. Not approved, suspicion of circumvention of currency transfer regulations. An additional customs fee was placed on the items that were approved.

Charlotte and Ellen apparently were granted permission to emigrate. Their belongings were packed, and they were living in a temporary apartment in Hamburg.

But something prevented them from leaving. I assume that Charlottes mother, Paula Fürst, was ill and she had to take care of her (she was the only child). Paula Fürsts records contain a request for payment for a rehabilitation holiday dated 16 July 1940. Paula Fürsts assets had been confiscated and she was granted a monthly allowance of 300 Reichsmarks. Her request for an increase to 500 Reichsmarks was denied on 27 October 1939, so she had to make a special request for all additional expenditures.

It is also possible that Charlotte hoped that her husband would prepare everything in London, but he apparently was detained in the refugee camp in the Netherlands for longer than expected.

Charlotte and Ellen Haas were not able to leave the country. On 18 November 1941 they, along with Paula Fürst, were sent to their deaths in Minsk. Ellen was eight years old, her mother was 33, and her grandmother was 57.

Most of the family members from Borken also died in concentration camps.

This biography was written by Lea Lührig, the daughter of one of the authors, with a little help from her mother.