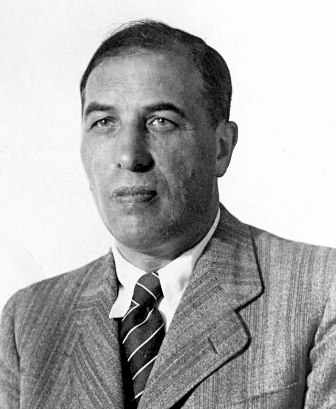 My father, Erich Gaertner, was born on 5 Apr. 1890 in Svijany, District of Turnov (German: Turnau), in Bohemia, which then belonged to Austria-Hungary, as the son of the estate owner and leaseholder Alfred Gaertner and his wife Berta, née Polak. He had a total of seven siblings, three sisters and four brothers. Of his siblings, only two survived the Holocaust.

Erich Gaertner attended business school in Prague and later studied at the agricultural college in Halle. In the First World War, he was an artillery officer in the Austrian Imperial and Royal Army. Serving in the fortress of Przemysl, which was surrendered in 1915 after the siege by the Russians, he became a Russian prisoner of war. Following the Russian Revolution, he returned to Prague via Finland.

After the war, he worked for a shipping company in Prague and settled in Hamburg in 1924, founding a shipping company of his own. That same year, while on a visit to Prague, he met my mother Edith Gaertner, née Robitschek, born in 1903, who was also the child of an estate owner, and they got married on 25 Jan. 1925. The happy marriage produced two sons, Hans in 1926 and Stephan in 1929.

Erich Gaertner was a very kind person and a good family man. He did sports, especially gymnastics, tennis, and skiing in the winter. He collected stamps with a passion and had a really nice collection that was confiscated by the Nazis. Together with his wife Edith he was, among other things, a member of a Latin-American club or association whose events the two liked to attend. He sent his sons to the renowned Bertram School on Harvestehuder Weg. In 1936, he became the owner of a six-cylinder Opel and obtained the drivers license. The car was later confiscated.

His company dealt above all with international transports, and in this connection he was involved a lot with goods transports to and from Czechoslovakia, which had to be reloaded to freight trains and cleared by customs. My father, whose company, E. Gaertner and Co., had a staff of about 14 employees, was very successful in his line of business.

When the Jewish wave of emigration began, he worked with a certain Neumann Company, which owned furniture moving vans. He took care of packaging the household effects of the emigrants into so-called "lift vans, i.e. moving containers, and arranged shipment to the countries of emigration, even to Palestine; in addition, he was an authorized shipping agent of the Palestine Office.

Since my father had not assumed German citizenship, the Nuremberg Laws [on race] initially did not apply to our family, and he was able to continue operating his company, which he had built up with many years of hard work, even after the Nazi seizure of power. Later, the NSDAPs Gau Economic Advisor (Gauwirtschaftsberater) appointed a trustee for the company, with whom Erich Gaertner got along well, however, and he continued to work in the company.

After the invasion of the Wehrmacht in Prague and the establishment of the Protectorate of Bohemia and Moravia in Mar. 1939, he was detained in Hamburg for a while, then fled to the Netherlands; but he was expelled to Germany and returned to Hamburg, from where he was deported on the second transport from Hamburg to the Minsk Ghetto on 8 Nov. 1941. In 1942, Valerie Back, Erich Gaertners sister living in Prague, received an illegal letter from him, according to which he was an interpreter at a shoe workshop. Probably he fell victim to a large-scale massacre committed in Minsk by the SS  probably in 1942. Subsequently, he was legally declared dead by a court of law.

His son Hans survived the Holocaust after more than three years of imprisonment in the Theresienstadt Ghetto, in Auschwitz-Birkenau, and in the Schwarzheide external camp of the Sachsenhausen concentration camp; his mother and brother Stephan survived the war as refugees in Switzerland.