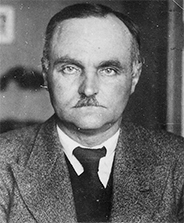 The historian Beatrix Herlemann ("Wir sind geblieben, was immer wir waren, Sozialdemokraten." Das Widerstandsverhalten der SPD im Parteibezirk Magdeburg-Anhalt gegen den Nationalsozialismus, 2001 ["We stayed what we always were, Social Democrats. The resistance behavior of the SPD in the party district of Magdeburg-Anhalt against National Socialism 19301945]) believes that the grouping to which Ludwig Wellhausen belonged was one of the most successful SPD resistance organizations in the German Reich.

Near his native Hannover, in Leinhausen, Ludwig Wellhausen trained as a mechanical engineer in a railroad workshop. He went to sea from 1902 to 1911 as a machinists assistant and later as a patented naval machinist on merchant ships. Until 1914, he worked as a master machinist at a power plant in Hamburg. During the First World War, he was employed as a master machinist. In 1919, he found employment in the port of Hamburg as a supervisor at the Norderwerft shipyard, where he was probably a member or chair of the employee representative committee. Ludwig Wellhausen was head of the Hamburg organization of the free trade union "Werkmeisterverband until presumably 1924.

From 1926 to 1932, he was party secretary of the Hamburg branch of the German Social Democratic Party (SPD). Worth mentioning, apart from the extensive everyday activities, is the organization of the large mass demonstrations from 1931 to 1933.

Starting in Jan. 1933 until the ban on June 1933, Ludwig Wellhausen was district secretary of the Magdeburg SPD.
Finally, from 1934 to 1938, he found work at Maschinenfabrik Buckau, R. Wolf, a machine manufacturer, in Magdeburg as a fitter and repair mechanic.

He agreed with the members of the SPDs Magdeburg-Anhalt district executive, Werner Bruschke, responsible for finances, education, and communal affairs, and Ernst Lehmann, responsible for youth, that the Nazis were a great danger for democracy. They therefore considered it urgently necessary to prepare the party quickly for work underground.
At a meeting in Berlin, one day before the SPD ban on 22 June 1933, Ludwig Wellhausen was elected to the advisory board as well as to a committee of five "principals ("Vormänner), a kind of illegal SPD leadership. It was to head the work across the Reich in case of the arrest of the acting executive committee.

In the six years since the Nazis had assumed power until 1939, Ludwig Wellhausen, Werner Bruschke and Ernst Lehmann maintained a wide-ranging information network that stretched
from the Old March (Altmark) to the Vorharz municipality in their former party district of Magdeburg-Anhalt, including about 50 towns and villages such as Stendal, Burg, Dessau, Köthen, Stassfurt, Halberstadt, Aschersleben, Wernigerode, and Thale. Above all, programmatic discussion was important to them. Most of the SPD members had a great need for information, which they could not satisfy, of course, from the regular press, "forcibly coordinated ("gleichgeschaltet) by the Nazis.
On 12 Jan. 1939, Ludwig Wellhausen was arrested together with 19 other party comrades from Magdeburg and the surrounding area in the prelude to a massive wave of arrests that mainly affected Social Democrats, and he immediately experienced severe mistreatment.

Until 9 Aug. 1939, he was a prisoner in Magdeburgs police prison, although the investigating judge had enjoined the issuing of an arrest warrant as early as Apr. 1939. On that day, he was taken to the Sachsenhausen concentration camp without trial on "suspicion of high treason. Ludwig Wellhausen died on 4 Jan. 1940.