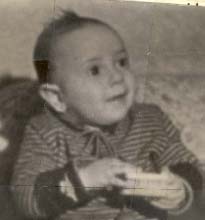 When the National Socialists assumed power in Germany in 1933, Bertha Abrahams in Dornum was not yet 20 years old, and the resident of Hamburg Werner Beit was a boy aged 15 years. However, in that year, both their future was destroyed because they were Jews. When they were married in Nov. 1939, six years of humiliation, disenfranchisement, and persecution lay behind them already. Nonetheless, they mustered the courage to start a family of their own. On 7 July 1941, their son Berl was born, only a few weeks before the deportations of Jews from Hamburg began.

Werner Beit grew up in Hoheluft-West. His parents were David and Betty Beit, née Jonas, who had been married in 1902. The father worked as an exporting sales agent, representing companies that produced belts, belt buckles, knitted fabrics, and childrens clothes. The family lived in a spacious apartment at Moltkestraße 55. Werner Beit had three considerably older siblings: Norbert Beit (born in 1903), Fanny Beit (born in 1905), and Irma Sophie Beit. The mother (born in Kiel in 1873) already died in 1926 when her youngest son was only nine years old. Werners siblings later managed to emigrate and survived. The father, David Beit (born in 1864), died in Hamburg on 30 June 1942. By that time, he lived at Kielortallee 13.

Werner Beit attended the Talmud Tora School and for some time the Realgymnasium [a high school focused on science, math, and modern languages] in Elmshorn. His landlords in Elmshorn subsequently said about him, "He was a bright boy and developed into an assiduous young man. Presumably, he had come to this foster family after the death of his mother. After graduating from school, he trained at the Albert Goldschmidt metal foundry in Altona, Venusberg 4, from Apr. 1932 to Apr. 1936. After the apprenticeship, he continued to work at the company until Mar. 1937; then he was dismissed "due to lack of work. Later, he found a job as a worker at the Israelite Hospital. On the deportation list dated Nov. 1941, on which the entire family was listed but then deleted, the occupation entered for him was "stoker. This occupational designation also appears on the death certificate of his father, whose death Werner reported to the records office.

After his dismissal as a skilled metalworker, Werner tried in vain to obtain an entry permit to Britain. In 1933, his sister Fanny had emigrated to London, and he had sent her a CV and a testimonial by his training company in English. In his CV, he writes about himself: "I am 1.69 m (5 ft 6.5 in), healthy, as well as strong and athletic above average.

Bertha Beit was born in Dornum in East Friesland. Her parents were the butcher Adolf Abrahams and Rosette, née Rose, who were married in Dornum in 1899 (on the Abrahams family, see also the Brager and Neugarten families). Bertha had a total of nine siblings, five brothers and four sisters. Probably in 1934, she came to live in Hamburg, as this is the year listed as the entry date to the German- Israelitic Community on her Jewish religious tax (Kultussteuer) file card. Bertha was 21 years old then. Perhaps she moved to Hamburg together with her brothers and hoped for an easier life in the anonymity of the big city. Her father, who was a native of Rhede on East Friedland, died on 8 Nov. 1938 in Dornum and was buried on the day the November Pogrom of 1938 took place. The mother, Rosette Abrahams, left the small town after the death of the father and husband and fled to join her children in Hamburg. She died there of cancer in 1941 and was buried in the Jewish Cemetery on Ilandkoppel in Ohlsdorf.

Prior to her marriage, Bertha did housekeeping work in Hamburg. According to the Jewish religious tax (Kultussteuer) file card, she had lived at Jungfrauenthal 53 (with Meseritz) and at Isestraße 6 (with Behr), before moving in with the Beits at Grindelberg 90 in late 1939. Presumably, she worked for these families as a "domestic help. At that time, she would no longer have been permitted to work for "Aryan families. The married couple Olga and Fritz Meseritz was deported to Riga on 6 Dec. 1941 (for biographies, see www.stolpersteine-hamburg.de). For both of them, Stolpersteine are located on Jungfrauenthal.

The names of the little boy and his parents  Berl, Bertha, and Werner Beit  already appeared on a list for deportations to Minsk on 18 Nov. 1941 but they were deleted again. The reasons are not known. When they were deported to Theresienstadt significantly later, on 24 Mar. 1943, the small family lived in the "Jews house ("Judenhaus) at Schäferkampsallee 29, where today a Stolperstein in front of house no. 25/27 commemorates Berl Beit. This is where Werner Beit had worked at the Jewish Hospital. Stolpersteine for the family of three were laid at what was likely the last residential address of their own choosing, at Grindelberg 90. They lived there on the fourth floor together with Werner Beits father and his uncle Benno Frank, before the three were forced to move to the "Jews houses ("Judenhäuser) at Kielortallee 13 and Schäferkampsallee 29. Grindelberg was probably also the place where son Berl was born.

Berthas brother, Sally Abrahams, had lived in Grindelallee as a subtenant for a while. Many years later, the daughter of this family still remembered him. According to her recollection, Sally was a butcher like his father and worked for butcher Silberstein. After Silberstein had to give up his business, Sally worked in the port. Fortunately, the account went on, he had succeeded in evading arrest by fleeing to Denmark, in the course of which his "Aryan appearance had helped him slip out of the city unrecognized.