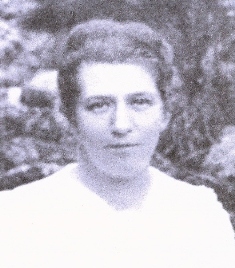 Paula Biram was born on 12 May 1878 in Silesia, in the small town of Neumarkt (present-day Sroda Slaska) between Breslau and Liegnitz. The town had a small Jewish community. Her parents were Moritz and Friederike Lasch. We know very little about her childhood and youth. At the age of 26 she married Dr. Max Biram in Breslau. He was 23 years her senior, and had been a rabbi in Hirschberg am Riesengebirge (present-day Jelenia Gora) for 18 years. She was his second wife. The marriage lasted for twelve years, until his death in 1916.

Max Biram was born on 1 January 1853 in Bornst (Babimost) near Posen, and grew up in Liegnitz. He attended the Catholic Matthias-Gymnasium in Breslau, and then, from 1872 to 1881, the Breslau Jewish Theological Seminary, which was famous for its "high academic standard. At the same time he studied at the university in Breslau. He wrote his doctorate on "the historical foundation of the prophetic book of Micah at the university in Tübingen. As a rabbi, he taught religion at the secondary school in Hirschberg. Max and Paula Biram owned their own house at Kaiser-Friedrich-Straße 15a in Hirschberg. Their only daughter, Johanna Dorothea (Hanna-Dörte), was born on 23 August 1906.

In 1913, a serious illness forced Max Biram to give up his position as rabbi. He died on 22 June 1916, at the age of 63. After his death, Paula Biram remained in Hirschberg for nearly twenty years. She moved to Hamburg in 1934, one year after the Nazis came to power.
Johanna-Dorothea Biram attended secondary school in Hirschberg, then studied dentistry in Berlin, Rostock, and Hamburg, where she received her license to practice in 1930. One year later she received her DMD from the Hamburg University Hamburg  an unconventional profession for a woman at the time. Only two years later, she would not have been able to pursue the degree as a German Jew. After one year as a dental assistant, she opened her own practice, in her apartment at Grindelallee 126.

The Nazi seizure of power destroyed her livelihood and her future. As she later testified, in April 1933, "during the boycott, uniformed Nazis took up position outside the building where my practice was. A few weeks later she was barred, because she was Jewish, from the national health insurance system, effectively depriving her of her livelihood. From that point onwards she was only allowed to treat Jewish patients, which she did, despite all difficulties, until she emigrated in 1939. Even emigrating did not save her career  in order to practice in the US, she would have had to get a new degree, which she was unable to do.

On 26 December 1933 Johanna Biram married Max Martin Levien (*15 March 1905 in Hamburg), the son of Martin and Olga (Heymann) Levian. He was a salesman and partner in his fathers business. After the business was dissolved, he worked for the Hamburg Jewish Religious Association. Martin Levien died on 17 May 1939 in Hamburg, just a few months after his son had emigrated. Olga Levien was deported to Theresienstadt on 15 July 1942, along with Paula Biram. Olga was transferred to the Treblinka Extermination Camp on 21 September 1942 and murdered there. A Stolperstein in her memory was placed at Hansastraße 40.

Johanna and Max Martin Leviens first two children were born in Hamburg: Kurt Martin on 8 April 1934 and Eva on 23 May 1937. Their youngest daughter Helen was born after they emigrated, on 16 November 1942 in San Francisco.

Decades later, after the death of his wife, Max Martin Levien told his children and grandchildren in California in his "Memoirs" about his wedding in the first year after the National Socialist takeover. In his aunts large apartment, under the decorated chuppah - the ceremonial canopy  Hamburgs Chief Rabbi Joseph Carlebach performed the traditional Jewish wedding ceremony, with the bride in a white wedding dress with veil and the groom in an evening suit with a (borrowed) top hat. Afterwards there was a big party with family and friends. For their honeymoon the couple drove to Bad Harzburg in the snowy Harz Mountains. Coincidentally a Nazi rally was taking place there at the same time, but that didnt disturb them. They spent New Year's Eve together with a large group of Jewish celebrants. This group was composed of both Zionists, on the one hand, and "Germans of the Jewish faith" on the other. At midnight, the Zionists sang "Hatikvah," the Zionist anthem, and the others sang the German national anthem - and each side tried to drown out the other. When he and Johanna were leaving the pub, she jokingly commented that at the next New Years Eve party they, the German Jews, would be singing the "Horst Wessel Song" - the anthem of the Nazi movement. Some Nazis nearby heard her remark and threatened them, and they fled to their room at a Jewish hotel. Forty years later, in retrospect, Max Martin Levien emphasized that for them, Jewish life still seemed to go on as before  "in the first months after Hitler's seizure of power we didnt take the political events too seriously ... the bitter truth came later ...".

In Hirschberg, Paula Biram was experiencing the National Socialist threat much more directly. A friend of the family had already become the victim of anti-Semitic riots. In August 1934 Paula Biram moved to Hamburg to live with her daughter. It is possible that the birth of her first grandchild was a reason for the move, but she was also fleeing from anti-Semitic riots to the "protection" of the big city. At first she lived near her daughter, at Grindelallee 157/1. On 26 February 1936 she and her daughter's family moved to Hallerstraße 6/I  as a way to save money. They lived there for three years, during which time her granddaughter Eva was born. On 10 November 1938, the day after the Pogrom Night, Max Martin Levien was arrested and taken to Sachsenhausen Concentration Camp. He did not return until December 18, on the condition that he leave Germany. Supported by a cousin who had previously emigrated to the US, Max Martin and Johanna Levien and their children managed to emigrate to England in February 1939 and a year later to the US. Paula Biram remained in Hamburg. After the Levien family's emigration, the banker Max Daniel and his wife Wally were assigned to live in the apartment on Ostmarkstraße, the name Hallerstraße had been given in 1938. They had been evicted from their large apartment on Hansastrasse to make room for "Volksgenossen" - Aryans. Paula Biram lived in one room in the apartment for three more years. After the deportation of Hamburg Jews to Lodz, Minsk and Riga began in the fall of 1941, she was forced to vacate this room and move to the "Jews house" at Bogenstraße 27/II on 26 January 1942. A few months later she received her "evacuation orders" and was deported to Theresienstadt.

As her daughter Johanna Levien testified in the context of a reparations hearing, Paula Biram received "... a monthly pension from the Jewish National Association in Berlin, as the widow of my father, who was a rabbi in Hirschberg, Silesia for 27 years. After my fathers death, she had also earned a small additional income by spot cleaning garments." According to her daughter, she was, "as a rabbis wife, always very conscientious and law-abiding. She was always careful to comply with all laws" - even, one must add, those of the Nazi regime.

From California, Max Martin and Johanna Levien tried to obtain exit visas for their mothers Paula Biram and Olga Levien in Hamburg. Paula Biram received an entry visa for Cuba. She hoped to travel from there to the US, to her daughter and grandchildren. The visa was issued on November 24, 1941, but by then it was too late to leave Germany. On 23 October 1941, with the beginning of the deportation of Jews from the "old Reich," Jews had been forbidden to emigrate.

Paula Biram was deported to Theresienstadt on 15 July 1942. She was on the first large transport of Hamburg Jews to the so-called "ghetto for the elderly" Theresienstadt. She was 66 years old. Paula Biram died there on January 8, 1943. The cause of death listed in the Theresienstadt Ghettos death registry was "intestinal catarrh" - gastroenteritis.

On August 9, 1943, the "sworn and publicly appointed auctioneer Wilhelm Wehling, Grindelhof 19" transferred the proceeds of the public auction of Paula Birams property to the Hamburg Regional Tax Office: 256.62 Reichsmarks.