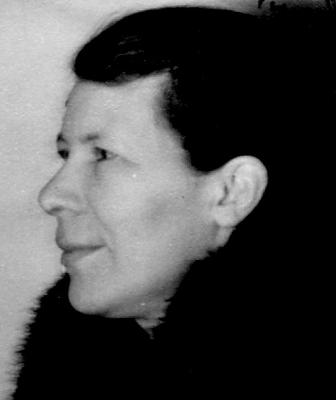 Since Oct. 1940, Max and Blanka Dreifus as well as Blankas niece Gertrud lived as subtenants with the Voss family. They had come to Hamburg from Pirmasens [in the Palatinate]. Initially, the Dreifus couple had been accommodated since 6 Dec. 1939 at Dillstrasse 15, a building of the Jewish Community.

Max Dreifus had owned a small shoe workshop in Pirmasens since 1917, but it had gone bankrupt in 1924 and was deleted from the company register in 1929. After that, the family probably kept afloat with reserve funds, taken from Blanka Dreifus property as well. From the restitution proceedings we know that in Pirmasens the family had lived in a three-bedroom apartment, furnished in solid middle-class style. A school friend of son Erich provided this information. The two boys gathered there almost on a daily basis to do their homework together.

Erich Dreifus was born on 21 Nov. 1913. After obtaining his graduation diploma (Abitur) from the Humanistische Gymnasium in Pirmasens, a high school emphasizing the study of the classics, he attended a vocational high school specialized in shoes. In 1936, he became one of the chairs of the Pirmasens local branch of the "Jewish Scouts League within the Federation of Jewish Youth Associations in Germany ("Jüdischer Pfadfinderbund im Verband der jüdischen Jugendvereine Deutschlands), which, oriented along middle-class, "life-reforming lines, helped familiarize youths with the Zionist idea. In Jan. 1939, Erich Dreifus emigrated to the USA. It is likely that he still witnessed many Jewish citizens of Pirmasens being taken to the Dachau concentration camp after the November Pogrom of 9 Nov. 1938. Apparently, though, he and his father were not among them. The local persecution of Jews may have been the immediate reason for his emigration, however.

On 1 Sept. 1939, the start of World War II, a similar fate initially struck the entire population of the City of Pirmasens: In connection with the extension of the "Siegfried Line ("Westwall), the city was declared a "red zone and all inhabitants, non-Jews and Jews alike, were evacuated. They had to leave their houses and were permitted to take along only the essentials, whereas furniture and other furnishings were left behind. At the time, about 200 of more than 800 Jews previously still lived in the city. The Dreifus family chose Hamburg as a place of refuge, without being forced to go there. Possibly, they had personal contacts in the city. In Aug. 1940, all non-Jewish inhabitants were allowed to return to their homes, as were, for a short period, 64 Jews, who were still permitted to dispose of part of their belongings as they chose. In the long run, however, all Jews were stripped of their right of residence. Pirmasens was declared "free of Jews ("judenrein). The Jews evacuated to areas located farther away did not even manage to save their property.

Max and Blanka Dreifus never saw their house again either. It has not been possible to determine what happened with the property in Pirmasens. The home with its entire furnishings was deemed as "having been abandoned and was with certainty auctioned off and the proceeds channeled to the state treasury, just as it happened with the homes of deportees in Hamburg.

By the time the residents of Pirmasens were allowed to return to their homes, Blanka and Max Dreifus were already living in Hamburg, where they received support from the Jewish welfare organization. Perhaps it was this humiliation that deprived Max Dreifus of his last ounce of vitality. He was, after two strokes in May 1931 and in Apr. 1939, weakened and partially paralyzed. He died on 12 Sept. 1941 at Isestrasse 96. He was buried in Hamburg at the Jewish Cemetery on Ilandkoppel. The indication of "suicide in the Memorial Book of the Federal Archives is based on incorrect information.

Six weeks later, Blanka Dreifus had to set out on the journey to death in Lodz on the first transport leaving the city.