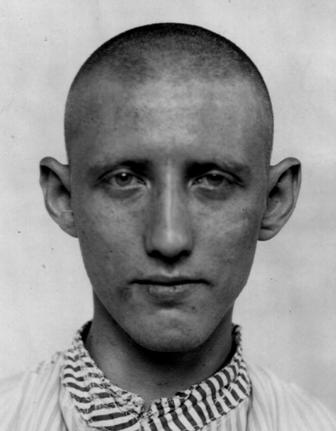 Gerhard Junke was born in Braunschweig as the son of August Junke (18771926). His father was a Social Democratic politician and premier of the German state of Braunschweig from 1921 until 1922. After finishing school, Junke learned the trade of butcher. Even during his school years, he was a member of Communist organizations.

He left Braunschweig and led "apparently a rather unsettled life. By 1935, he had nine previous convictions for property offenses, misuse of weapons, spending the night in a train station, and a sex offense. From 1927 to 1929, he was a juvenile in care at the supervised home in Königslutter, and from 1929 to 1932 as well as from 1934 to 1935, he was an inmate at the "sanatorium and nursing home in Bernburg/Anhalt ("Heil- und Pflegeanstalt Bernburg/Anhalt) and the "sanatorium and nursing home in Königslutter ("Heil- und Pflegeanstalt Königslutter), where he was sterilized because of schizophrenia in Mar. 1935.

On 28 Apr. 1935, three days after his discharge from Königslutter, he was arrested at Hamburg Central Station on suspicion of having travelled on a train of the Reichsbahn without a ticket. From the Hamburg-Stadt pretrial detention facility, Junke was committed to the "Langenhorn sanatorium and nursing home ("Heil- und Pflegeanstalt Langenhorn). On 9 Dec. 1935, his trial took place before the Hamburg Regional Court (Landgericht). Based on a medical experts report, the judge ordered institutionalization in a sanatorium and nursing home in accordance with Sec. 42 b of the Reich Criminal Code (Reichsstrafgesetzbuch  RStGB). The court assumed that "due to his mental illness, offenses are bound to recur, which means that from a medical point of view, too, one must state that public safety requires such confinement.

On 17 December, Gerhard Junke was relocated to the "sanatorium and nursing home in Bernburg/Anhalt ("Heil- und Pflegeanstalt Bernburg/Anhalt). On 18 May 1936, the State Welfare Office in Dessau turned to the Hamburg Regional Court with the demand to transfer Gerhard Junke to Langenhorn. This request was explained as follows: "Since the person in preventive detention, Junke, no longer constitutes a case for welfare services  according to a medical experts report, too, for which we asked, Junke did not commit the fraudulent act in Hamburg in a state of unsound mind, as he is a personality inclined toward crime anyway  we ask  that the nursing fees for Junke amounting to 2.80 RM [reichsmark] a day be paid to the cashiers office of the Bernburg Landes-Heil- und Pflegeanstalt and to arrange for commitment of Junke to the Langenhorn State Hospital. Incidentally, the Bernburg institution is not to be considered for accommodating persons in preventive detention and it does not have available any suitable rooms to provide sufficient protection against escaping either. Therefore, we ask [for] a transfer of Junke to Langenhorn as soon as possible. Thus, Gerhard Junke was no longer treated as a patient requiring therapy but merely as a criminal.

On 6 Jan. 1936, the office of the Hamburg Senior Public Prosecutor (Oberstaatsanwaltschaft) ordered his transport from Bernburg to the "Heil- und Pflegeanstalt Langenhorn. Dated 15 July 1940, a passage from a medical experts report from Langenhorn reads, "The schizophrenic illness of Gerhard Junke ... holds out no chance of recovery. One must probably reckon with permanent institutionalized treatment. In his behavior, he is entirely unpredictable and, due to his strong inclination toward perverse-sexual activities, an extremely dangerous character. The purpose of commitment has not yet been achieved. The recommendation is follow-up examination after three years.

Some eleven months later, on 20 June 1941, Gerhard Junke submitted an application for "voluntary castration, hoping to be released from preventive detention afterward. On 30 Sept. 1941, Senator Friedrich Ofterdinger approved the application. Ofterdinger stated, "Junke ... is a man with a bent to strong sexual passions, homosexually oriented, entirely unstable and uncontrolled, a man with sexual drives dangerous to the public and exacerbated by affective factors. The castration took place in the Harbor Hospital on 10 Dec. 1941.

Nevertheless, Gerhard Junke did not regain his freedom anymore. On 25 Mar. 1943, he was transported, in the course of a "general relocation operation, to the former Heil- und Pflegeanstalt Meseritz-Obrawalde/Brandenburg, a "sanatorium and nursing home converted into a euthanasia killing center, and killed there on 17 Aug. 1943. The official cause of death was "cardiac insufficiency.

Gerhard Junke is among the 2,668 patients for whom proof exists that they were transported from Langenhorn to be murdered in euthanasia killing centers. To this day, there is no memorial commemorating these euthanasia victims from Langenhorn. Only a plaque commemorates the execution of the Hamburg physician John Rittmeister, who belonged to the resistance circle of the "Red Orchestra ("Rote Kapelle). It is all the more important that a Stolperstein for Gerhard Junke in front of the former "Heil- und Pflegeanstalt Langenhorn, todays Asklepios-Klinik Nord  Ochsenzoll, is representative in commemorating this group of Nazi victims. A second Stolperstein in front of the former Harbor Hospital commemorates collectively all homosexuals castrated there.