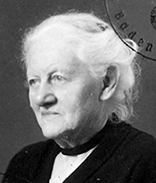 Johanna Kohn was born in Pless, now called Pszczyna. The Upper Silesian district Pless became part of Poland when the eastern parts of Upper Silesia were ceded in 1922. The region again became part of the German Reich when Germany invaded Poland in 1939, lasting until 1945.

Her parents were the businessman Friedrich Salomon and Friederike Kohn, née Münzer.

The parents of Clara Kaiser, born in Wroclaw, were called Carl and Rosalie Kaiser, née Kohn.

Friedrich Salomon and Rosalie Kohn were brother and sister, therefore Johanna and Clara were cousins.

Johanna Kohn gave her religion as Israelitic, her marital status as "single and her profession as "private (she probably regarded herself as a person of private means). She received her identity card on 28 June 1939. At the same time she applied on 9 May 1939 for an international passport, citing as a reason her intention to immigrate to Bombay, India, still a British colony at the time. According to the officially recognized, publicly charitable emigrant counseling agency, she held tickets for ship passage and proof of confirmation of an immigrant visa for India from the British Consulate issued on 6 Jan. 1939. The Baden-Baden tax office had also already issued clearance certificates on 21 Apr. 1939, 25 Apr. 1939 and 13 May 1939, declaring that "the named person does not owe any Reich taxes, Reich flight tax or any levy on Jewish assets and that "no taxation objection exist on the part of the Baden-Baden city treasury with regard to the export of her furniture or her taking household items abroad.

Furthermore, on 17 May 1939 both the district human resources department of the NSDAP regional director Rastatt and the Gestapo headquarters in Karlsruhe certified that there were no "political objections to her emigration.

At the same time, Clara Kaiser also applied for a passport. Single, of Israelitic faith and not employed like Johanna, she also submitted an application to immigrate to Bombay. In her case too, the authorities had no objections to her leaving the country, so the obligatory documents were issued to her.

On 21 Aug. 1939 Johanna Kohn and Clara Kaiser left Baden-Baden for Hamburg where they arrived seven days later. In Hamburg they planned to board a ship for Bombay, however the start of World War II thwarted their plans, their entry permit lapsed, and all transport of civilians on ships was stopped.

So they stayed in Hamburg and found temporary accommodation at Isestraße 69 on 14 Sept. 1939 before moving into one room together, sublet from the Jewish landlady Ella Lange, born on 24 Feb. 1878 in Hamburg, at Hallerstraße (Ostmarkstraße) 42. They registered with the Jewish community.

A letter Clara Kaiser wrote to the Hamburg foreign currency office dated 28 July 1940 shows that she paid the living expenses for both of them. She requested that she be allowed to access the 1,127 RM she had been reimbursed for the cancelled transport of her furniture to India  the amount originally paid for the contract was 2,000 RM  since her cash assets were no longer in an "immigration bank account but in an account frozen by a "protection order.

On 29 May 1941 Johanna Kohn and Clara Kaiser moved to the "Jewish house at Sonninstraße 16 E (ground floor) in Altona, most likely because Ella Lange had to give up her apartment on Hallerstraße. Ella Lange was deported to Riga-Jungfernhof on 6 Dec. 1941.

The two women were deported on the second "elder transport. The Jewish community noted on their religious tax card: "emigration on 19 July 1942 to Theresienstadt. Together with 769 others, they rode from Hannoverschen Train Station at Lohseplatz to Theresienstadt Ghetto. Train number VI/2 arrived there one day later. Two months later on 21 Sept. 1942, they and 178 other people were transferred on transport Bp. 873 to Treblinka extermination camp where they were most likely killed the same day.

From their original transport from Hamburg, another 207 people were transported to Auschwitz in 1943 and 1944. Only 93 people deported on the VI/2 transport survived the Holocaust.

Johanna Kohns belongings stayed behind in Hamburg: a chrome-plated womens watch and five silver coins. On 12 Aug. 1942 those "household items seized for the benefit of the German Reich were sold in a "voluntary auction by the bailiff Bobsien. The auction brought in 25 RM, deducting the fees charged by the government of 23.95 RM meant proceeds of 1.05 RM which also were paid to the "Reich, meticulously recorded by the NS administration.

On 19 Aug. 1948 Dr. Hedwig Kohn inquired with the American authorities as to the fate of her cousin Clara Kaiser. She received the reply that they had no official documents confirming Claras death but that she had been on a death transport. Hedwig Kohn, born on 5 Apr. 1887 in Wroclaw, had a doctorate in physics and was a private lecturer specialized in optical physics. She had lost her position as a private lecturer at Breslau University in 1933, emigrated to Sweden in the summer of 1940. Then, via Russia, Siberia, Japan, and Hawaii, she made it to San Francisco. Starting in 1942, she worked at the prestigious Wellesley College in Massachusetts. In 1945 she became a full professor and in 1946 a naturalized American citizen. She died in 1964, single and with no children.