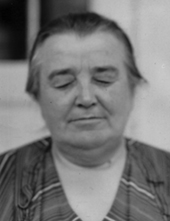 Juliane Auguste Camilla was born as one of 13 children of Heinrich Caspar Brinkmann and Ida Anna Maria Brinkmann, née Warnholtz. She was born on 23 Feb. 1882 at Bahrenfelder Steindamm 28 in Ottensen, today a quarter of Hamburg. Julie, as everyone called her, was baptized and confirmed in Ottensen.

Her childhood was marked by malnutrition, rickets, and her fathers alcohol consumption. Many of her siblings died in childhood. Due to malnutrition, Julie learned to walk late. This also meant that she could attend school only by the age of nine. After school, she then "got a position, i.e., she worked as a domestic servant, and thus learned how to manage a household.

After that, she earned her living as a worker, though we do not know where. In 1899, she moved to Griegstrasse 41 in Bahrenfeld, then to Grosse Westerstrasse 35, and from 1901, she lived at Schauenburgerstrasse 14 in Altona.

Julie married Max Emil Pester on 10 Dec. 1904 in Altona. From 1915 to 1918, the couple lived in an apartment at Bahrenfelder Kirchenweg 28.
Max Emil Pester was born on 19 Oct. 1872 in Oberfrohna near Chemnitz.
He was deployed as a stoker on the ship "Colchester during the First World War. There he died on 3 Mar. 1918 off the port of Kiel as a result of a war mission. Where he was buried could not be determined.

Julie met Eduard Bendrat in 1919. He moved in with her at Bahrenfelder Kirchenweg 28 and on 7 May 1921, they married at the Altona registry office.
Eduard Bendrat was born as a child of Franz Bendrat and Justine Bendrat, née Schmidt, on 23 Jan. 1872 in Langkischken/East Prussia. He worked as a "rammer in road construction. The newlyweds then moved to Bleicherstrasse 16 in Altona.

Julie was first admitted to the psychiatric ward at Altona Hospital on 22 May 1935. The admission interview revealed that she suffered from a psychosis that must have started around 1932. The trigger was an argument with the neighbors who had subsequently moved out. Julie Bendrat expressed "paranoid ideas and "hallucinatory experiences during the hospital admission. The doctor then prescribed insulin therapy for her, which was unsuccessful with respect to the psychosis though. Julie Bendrat was nevertheless released home after a short time.

Her depressions worsened until an attempted suicide on 8 Sept. 1936, which led to her being admitted to hospital again. At this time, the diagnosis during the hospital admission was "schizophrenia. She was released at the end of Sept. 1936. The third admission took place in Dec. 1936 after another suicide attempt. Even then, the reason given for the admission was "schizophrenia. The physicians prescribed electric shocks as therapy, which, as the medical staff recorded Julie Bendrats laments, reached the limit of what she could bear. According to this, sometimes she believed that the treatment would kill her. Two months later, she was discharged to go home.

In early Dec. 1937, she admitted herself to hospital because her depression had worsened. Once again, an attempted suicide was behind her. Once more, during the admission procedure, she provided the argument with the neighbors as the reason. She said she felt haunted by them. She also complained of aches in her legs, cried a lot, and felt completely overwhelmed. On 11 Dec. 1937, she was nevertheless discharged.

Julie was committed to the Eilbecktal "nursing home and sanatorium (Eilbecktal "Pflege- und Heilanstalt) on 5 Apr. 1938. The reason for admission was "acute agitation and paranoid schizophrenia. Trigger for the admission were the neighbors who had called the police.

Julie Bendrat was transferred to the Eppendorf University Hospital in Apr. 1938. There doctors treated her with electric shocks and insulin shock therapy. These treatments had been ordered by the attending physician by the name of Bürger-Prinz. The insulin therapy involved daily insulin doses of up to 50 units over a period of two months. This put her into "hypoglycemic shock, which then often became life-threatening. The hypoglycemia caused severe sweating, trembling, restlessness, irritability, nausea, vomiting, outbursts of anger, and even faintness. She went into hypoglycemic shock more than 32 times overall.

There she often could not sleep at night and felt persecuted. The neighbors would  she believed  harass her. She, for her part, then subsequently threatened the neighbors with a knife, which in turn led to a police operation and renewed admission, this time to the Langenhorn "sanatorium and nursing home on 24 Nov. 1941. Again, the reason for her admission was "schizophrenia, and again she was discharged home (at the end of Dec. 1941). Julie Bendrats last place of residence before admission was Röhrigstrasse 40 in Altona.

A letter ordering her immediate committal a psychiatric clinic, as she allegedly posed a danger to herself and her surroundings, could not be delivered on 31 Jan. 1942, because the letter carrier stated that her delusional ideas had made it impossible for him to hand it over. Julie was not allowed to accept the police order for her admission to the Eilbecktal "nursing home and sanatorium because of her mental condition. The admission took place nevertheless after a short time, first to Eilbecktal, then to Langenhorn.

At the age of 62, she was transferred from Langenhorn to the Hadamar "nursing home and sanatorium on 14 July 1943. The diagnosis was schizophrenia.
Hadamar was a "euthanasia killing center. The murder of persons in Hadamar took place in the form of gassing, overdosing with medicines, and through malnutrition. Julie Bendrat was also murdered there. The persons in charge entered 12 June 1944 as the date of death; the cause of death indicated was "infirmity of old age and "senile feeblemindedness.

In an urn, Julie Bendrats mortal remains were sent to the Altona cemetery on Stadionstrasse in Hamburg. She was buried there on 22 Aug. 1944 in an urn grave numbered 6U.X.53-54.

Julie Bendrats husband Eduard Bendrat died on 7 Apr. 1951 in Hamburg. He was buried at the Altona cemetery on Stadionstrasse next to his wife Julie.