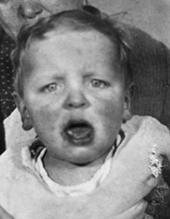 Jürgen Adolf Puls, born on 20 Mar. 1940 in Hamburg, admitted on 16 Dec. 1941 to what was then the Alsterdorf Asylum (Alsterdorfer Anstalten), "transferred on 7 Aug. 1943 to the "Kalmenhof sanatorium and nursing home ("Heil- und Pflegeanstalt Kalmenhof) near Idstein in the Taunus Mountains, died on 8 Nov. 1943

Jürgen Puls was born on 20 Mar. 1940 in Eimsbüttel, Bei der Apostelkirche 8. His father Hermann Ernst Eduard Puls, born on 21 June 1874, came from Lübtheen in Mecklenburg. He had worked for many years as a self-employed innkeeper, but had later worked as a driver. He had married his first wife in 1901 in Hannover; she had died in 1926. In the same year, he had married Emma Minna Alwine Dora Elisabeth Gehle, 28 years his junior and born on 5 Mar. 1902.

Hermann Ernst Eduard Puls and his second wife already had a son born in 1924. In quick succession until 1940, 14 more children were born, four of whom died shortly after birth. The couple moved from Hannover to Celle and in the early 1930s to Hamburg.

During the Second World War, Jürgen Puls father was drafted into the Wehrmacht as a driver. At the time, his mother was working as a stewardess on a steamer sailing from Hamburg to Norway. The oldest brother completed an apprenticeship as a cook, the other siblings were in the Nazi evacuation scheme for children (Kinderlandverschickung), where children from areas prone to air raids were supposed to recover and receive teaching. Jürgen and a brother 12 years his senior had allegedly remained in their parents home without constant supervision.

A social worker intervened. She believed Jürgen was "threatening to degenerate. "Because of neglect of the child by the parents, the Hamburg Youth Welfare Office applied to the District Court (Amtsgericht) for custody to be withdrawn and on 20 Feb. 1941, arranged for Jürgen to be placed in the municipal infants home on Winterhuder Weg.

Although Jürgen was only eleven months old when he was admitted to the infants home, the staff there complained that he was not yet able to walk or speak, eating only a bit of mashed food, that did not play with toys, and did not listen to his name. Since he often screamed in the home, kicked angrily with his legs, and could not be calmed down, his nursery school teacher noted after seven months that he made a "feebleminded ("schwachsinnige) impression.

At the request of the Hamburg Youth Welfare Office, Jürgen was examined and assessed by the medical officer by the name of Gräfe on 15 Sept. 1941: He considered Jürgen to be completely beyond being influenced, as he screamed "constantly without reason during the examination and fixed his gaze on objects presented only briefly. According to the physician, this was a child burdened by his family background. Showing normal physical development, he was mentally and functionally far behind his age though and he was not expected to be able to catch up in the near future. The physician considered Jürgens committal to the Alsterdorf Asylum "because of feeblemindedness to be necessary.

With this diagnosis, Jürgen was admitted to the then Alsterdorf Asylum (today the Protestant Alsterdorf Foundation) on 16 Dec. 1941 as a "detention case ("Bewahrfall). The costs were covered by the Hamburg State Welfare Office. On his arrival, Jürgen Puls, who was by then 20 months old, was first admitted to the infirmary as was usual.

At this time, his patient file indicated, "Pat.[ient] must be completely taken care of in terms of personal hygiene and requires feeding, makes a lot of trouble, eats only milk soup. He cannot speak, but at times, he cries a lot and then becomes hoarse, and it is difficult to calm him down. He prefers to be alone with a toy. He cannot walk, but tries to stand upright by the lattice and then walk a few steps, holding on tightly. He simply relieves himself, he cannot keep dry and clean. Two months later, the nursing report shows that he is already getting better at eating. Jürgen is also not screaming as much anymore and has learned some words like "Mama and Papa.

During the heavy air raids on Hamburg in July/Aug. 1943 ("Operation Gomorrah), the Alsterdorf Asylum also suffered bomb damage. The management of the institution took the opportunity, after consulting with the public health authorities, to transfer some of the residents who were considered "weak in work performance, requiring nursing care, or particularly difficult to other sanatoria and nursing homes in order to "relieve the institution with several transports. On 7 Aug. 1943, 52 boys between the ages of two and 12 were transported to the "Kalmenhof sanatorium and nursing home near Idstein. Jürgen Puls was one of the 52 boys.

The Kalmenhof, pedagogically progressive to begin with, was an institution for the disabled founded in 1888. It was included in the "euthanasia program of the "T4 Operation ("Aktion T 4) during the Nazi era. It functioned as an intermediate institution for the Hadamar "euthanasia killing center. In Aug. 1941, after the official end of the"T4 Operation, a "childrens special ward of the "Reich Committee for the Scientific Registering of Serious Hereditary and Congenital Illnesses ("Reichsausschuss zur wissenschaftlichen Erfassung von erb- und anlagebedingten schweren Leiden) was set up at the Kalmenhof and the killing by overdoses of medication continued.

Jürgen Puls was also murdered there. He died on 8 Nov. 1943, three months after his transfer. Allegedly, he died  as stated on the death certificate at the Idstein registry office  of "idiocy, nutritional disorder, and marasmus. The place of birth and names of his parents were considered unknown.

Jürgens mother had not been informed about the transfer of her son. She had found a new home in Eimsbüttel at Bismarckstrasse 105 after being bombed out. On 22 Jan. 1944, she wrote to the administration of the Alsterdorf Asylum, asking for information about where Jürgen was and how he was doing. Two days later, she received the news that Jürgen had been transferred to the "Heil- und Erziehungsanstalt ("sanatorium and educational institution) in Idstein due to damage to the institution caused by enemy action. She was not informed that he was no longer alive at that time. Whether and when she learned of the death of her child, we do not know.