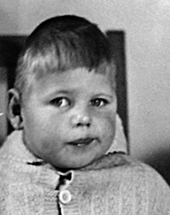 On 4 Dec. 1934, at the age of two and a half years, Walter Pentzien arrived at what was then the Alsterdorf Asylum (Alsterdorfer Anstalten) (today the Alsterdorf Protestant Foundation). He was the second child of the married couple Wilhelm Hans Peter Pentzien (born on 1 Oct. 1890) and Johanna Paula Fernandine, née Prüssmann, widowed name Berg (born on 25 Sept. 1890). His sister Linda, about three years his senior, had been born before him. The parents had married in Hamburg on 8 June 1929, and lived at Mühlenkamp 8, House 7 in Hamburg-Winterhude.

Wilhelm Pentzien, a dockworker, had from his first marriage a son named Helmuth, who lived with his mother after the separation. Johanna Pentzien already had two daughters as well: Elli and Irma. Her first husband had not returned from the First World War. In order to marry again, she had had to have him declared dead in 1929.

During her pregnancy with Walter, Paula Pentzien suffered from anemia and had fallen down stairs twice. However, Walters birth was considered normal. Starting on the third day of life, his parents noticed that their son "cramped up.

Walter fell ill with measles and had to be treated in Nov. 1932 for "bronchopneumonia (pneumonia) and "microcephaly (deformation of the skull) in the pediatric clinic of the University Hospital in Eppendorf.

On 26 Dec. 1933, he was baptized in the Matthäuskirche, a church in Winterhude.
During his admission examination in Alsterdorf on 4 Dec. 1934, Walters "motor restlessness became apparent. The diagnosis of senior physician Gerhard Kreyenberg was "idiocy ("Idiotie): "The boy is suffering from a considerable degree of feeblemindedness ["Schwachsinn], probably due to cerebral malformation.

According to the entry in his patient file, Walter was reportedly a child of proportions corresponding to his age, with a "distinct tower skull [i.e., oxycephaly] and backward in his mental development. In addition, he suffered from epilepsy and he was paralyzed on the left side, as was first noted in July 1935.

Walter, who had still been given the "bottle at home, was well fed with mashed potatoes and milk soup in Alsterdorf. He was very susceptible to infectious diseases and was often transferred to the infirmary.

Walters mother visited her son regularly, and at times, Walter was also discharged home on leave.

In the following years, Walter learned to walk with support, but he did not learn to speak. He listened to his name, was affectionate, and got himself noticed by screaming when he was not feeling well.
Walter was "almost continuously on the move, but also "mostly quietly contented, he is happiest in the bathtub. Fixations with the "belt and "protective jacket [i.e., straitjacket] were supposed to help against "restlessness. Because he had to be fed and was "unclean, he was considered "care-intensive.

During the air raids on Hamburg in July/Aug. 1943, parts of the Alsterdorf Asylum were also destroyed. In agreement with the Hamburg public health administration, the institutions management decided to transfer more than 400 patients to other areas. Walter Pentzien was among the 52 boys from Alsterdorf who were transferred to the Kalmenhof "sanatorium and nursing home ("Heil- und Pflegeanstalt Kalmenhof) near Idstein on 7 Aug. 1943. They were first taken to the freight station in buses of the "charitable ambulance organization (Gemeinnützige Krankentransport GmbH  "GekraT), a branch of the "euthanasia headquarters at Tiergartenstrasse 4 in Berlin, and from there they were taken by train. The next day. the boys arrived at Kalmenhof.

For Walter, the "journey must have been an ordeal: The day before, Monday morning, he had fractured his femur and he was taken away without medical care "since the leg cannot be stretched anyway.

Originally, the Kalmenhof institution, founded in 1888, was a progressive, pedagogically oriented institution for people with mental disabilities. Since 1939, however, it had been part of the "euthanasia program of "T4 operation (a cover designation after the headquarters of the Berlin euthanasia center at Tiergartenstrasse 4). The patients were transferred from there to the neighboring Hadamar "euthanasia killing center and murdered. After the official stop to the euthanasia killings in Aug. 1941, a "childrens special ward ("Kinderfachabteilung) of the "Reich Committee for the Scientific Registering of Serious Hereditary and Congenital Illnesses ("Reichsausschuss zur wissenschaftlichen Erfassung von erb- und anlagebedingten schweren Leiden) was set up at Kalmenhof, where children were killed by overdosed medications such as Phenobarbital (Luminal), scopolamine, or morphine.

Walter Pentzien died ten days after his arrival at Kalmenhof. On his death certificate, the cause of death was indicated as "idiocy, epilepsy, and status epilepticus.

His parents received no notification of their sons death. Allegedly, the name of his parents was unknown.