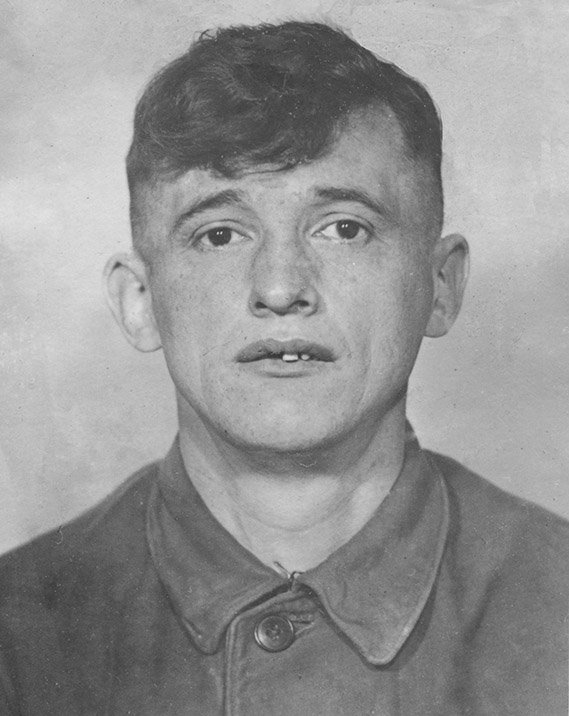 Hermann August Garber, born on 12 July 1907 in Hamburg, died on 10 May 1945 in the Mainkofen "sanatorium and nursing home ("Heil- und Pflegeanstalt Mainkofen).

Hermann August Garber was born on 12 July 1907 in Hamburg-Hammerbrook, at Banksstrasse 119. His father, Karl Johann Christoph Garber, born on 4 May 1875 in Hagenow/Mecklenburg, who was just called Carl, and his mother Louise Gustava Olga, née Dahl, born on 12 Dec. 1885 in Hamburg, had married on 17 Dec. 1904 in Hamburg. The marriage produced five children. In addition to Hermann August, these were his older brothers Carl, born on 30 May 1905; Walter Johannes Hermann Alfred, born on 6 July 1906; and his sisters Karla and Wera, born on 2 Oct. 1908, and 26 Sept. 1919, respectively.

The family also included a half-brother, Hellmuth Otto Christoph Garber, born on 28 Dec. 1899, from Karl Johann Christoph Garbers first marriage. His first wife, Julie Jacobine Caroline Garber, née Leitow, born on 27 June 1878 in Hamburg, had passed away on 11 Mar. 1904 at the age of 25.

No records of Hermann August Garbers early childhood and adolescence can be found except for the clue that he attended school up to the fourth grade (at that time, the first grade was the graduating class). He lived with his parents.

In 1927, at the age of 20, Hermann August found work at "Eilbecker Meierei von G. Pönitz, a dairy, at Eilbecker Weg 39/41. A little later, Hermann August being 21 years old by then, he took up a messenger job at the hardware store of Theodor Nasemann at Dorotheenstrasse 178 in Hamburg-Winterhunde. This employment was also not of long duration.

As he stated when he was admitted to what was then the Alsterdorf Asylum (Alsterdorfer Anstalten; today Evangelische Stiftung Alsterdorf) on 22 Mar. 1935, he had not spoken a word in the Farmsen care home for five years. This might suggest that Hermann August Garber became a resident of the Farmsen care home again shortly after his discharge, before being relocated from there to the Oberaltenallee care home in Hamburg-Barmbek on 21 June 1934.

A few months later, on 31 Nov. or Dec. 1934 (the dates differ), Hermann August became a patient at the Friedrichsberg State Hospital (Staatskrankenanstalt Friedrichsberg), a mental clinic. This was justified in the medical certificate by indicating that the admission "to the St.K.A. Friedrichsberg was necessary because of imbecility. Main symptoms: Suicidal intentions (fall out of a window), repeatedly turns on the hot water taps, completely inaccessible. State Welfare Institutions Hamburg, signed Dr. Pecht. When admitted to Friedrichsberg, Hermann August did not answer any questions, according to an excerpt from his medical file. It was further recorded that he had had a "series of mild seizures, was confused between seizures, and exhibited an "absence-like state of consciousness. The file went on to state that he did not speak but communicated his wishes to the physician in writing. Because of great uncleanliness, according to this, he had to be "bedded down. However, on 22 Mar. 1935, about three months after his admission, the record indicated, "Speaks again, works diligently. Transferred to Alsterdorf.

When admitted to what was then the Alsterdorf Asylum, Hermann August Garber was described as a tall slender man 1.70 meters in height (about 5 ft 7 in) with a petite build. The diagnosis was "epilepsy.

It was also noted in Alsterdorf that he often did not speak, but tried to make himself understood by written notes or by hand movements. When he was given a lighter to light a cigarette only after expressing his wish verbally, he explained, according to the patient file: "If you were in my place, you would do the same, that is not stubbornness on my part, but because I am bound to the institution all my life. All my siblings are married, my parents are so good to each other and I am sitting here, my guardian brought me to an institution, my parents would have let me rot on the street. If nobody had found out here, I would not have spoken, just as in Farmsen, where they said: the man is decent and quiet and they left me alone. Not yet today, but tomorrow it will start, then I will not speak for eight weeks.

According to the patient file, Hermann August Garber often fell into such violent states of agitation during his stay at Alsterdorf that he was isolated in a single room or even in a cell. He had thrown chairs, allegedly hit his fellow patients for no reason, and vomited on purpose. When admonitions failed to calm him down, Hermann August was given a "full body pack treatment ["Ganzpackung  whereby the entire body was tightly wrapped]. In this treatment, patients were wrapped in nettle sheets or bed sheets and doused with ice-cold water.

In May 1936, Hermann August Garber is said to have had suicidal thoughts. No further details are known.

His parents returned him early from a vacation in August. As they reported, he had sat on the drawbar between a truck and its trailer in order to get ahead faster for the completion of an errand. Reportedly, the times spent waiting for leave and those following his return were overshadowed by "upsets on a regular basis. Hermann August would then not speak, instead vomiting, soiling his clothes and the surroundings, as well as attacking his fellow patients and crying.

In 1937, the Alsterdorf Asylum initiated Hermann August Garbers sterilization. According to the "Law for the Prevention of Offspring with Hereditary Diseases ("Gesetz zur Verhütung erbkranken Nachwuchses) enacted in July 1933, a person could be rendered infertile (sterilized) "if, according to the experience of medical science, it is highly probable that the persons offspring will suffer from severe physical or mental hereditary defects. Those considered as having a "hereditarily disease were persons "who suffered from any of the following diseases: congenital imbecility, schizophrenia, circular (manic-depressive) insanity, hereditary epilepsy, hereditary St. Vitus dance (Huntingtons chorea), hereditary blindness, hereditary deafness, severe hereditary deformity. In addition, the law stipulated, "Furthermore, anyone suffering from severe alcoholism may be rendered infertile.

On 20 Sept. 1937, Hermann August Garber was transferred to Eppendorf University Hospital. After the surgery, he returned to Alsterdorf on 27 September.

The further reports about Hermann August Garber are similar to those from previous years. Repeatedly, there had been conflicts with fellow patients, so that he had once been transferred to the "observation room ("Wachsaal).
The "observation rooms already existed by the 1910s. There, restless patients were isolated and treated with permanent baths as well as sleep and fever therapies. In the course of the 1930s, their function changed: By then, patients were mainly immobilized, partly with medication, partly by means of fastening or other measures. Those affected often felt this to be punishment.

The transport to Mainkofen also included Hermann August Garber. He arrived there on 11 Aug. 1943. In Mainkofen, too, Hermann August was described as very agitated at times and incompatible. It was not until Apr. 1945 that the entry in the patient file changed: "In recent times, considerably calmer and more tolerable, hardly cares about his surroundings. Comes to the nurse only rarely and asks for a smoke or snuff, writing paper. Likes to read very much, occupies himself with it all day.

Mainkofen was one of those institutions where the death of patients was deliberately brought about by food deprivation (starvation diet, meatless and fatless diet, referred to in Mainkofen as "3-b diet), neglect in nursing care, and overdosing with medication. From 1943 to 1945, 762 patients died in the so-called "hunger houses in Mainkofen. The alleged causes of death were recorded as enteritis, tuberculosis, and pneumonia in particular.

Treatment measures for Hermann August Garbers infection of the left hand and his intestinal condition are not documented.

Hermann August Garbers parents did not receive any notification of their sons death because this had allegedly not been possible "due to the postal blockade in place at the time. Wera Brückner, Hermann Augusts youngest sister, received the following reply to her inquiry: "According to the medical history, your brother died of enteritis and phlegmonous inflammation of the left hand on 10 May 1945. The intestinal disease, the cause of which had not been clarified, progressed with violent diarrhea, which did not respond to any treatment. As a result of reduced resistance, the body was no longer able to cope with an infection that had occurred in the meantime, the cell tissue inflammation of the hand.