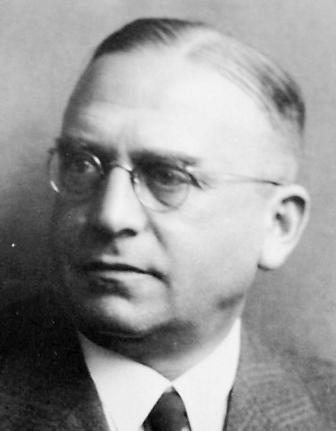 Hermann Samuel was born on 27 Jan. 1881 as the second child of the merchant Moses Samuel and his wife Fanny. After graduating from high school (Abitur), he began studying law, completing his studies after legal training in Hamburg by passing the first state exam in Kiel in 1904. At the end of the year, he earned his doctorate of law in Rostock, obtaining the title of Dr. jur. After passing his second state examination on 21 Dec. 1908, he received his license to practice as a lawyer on 22 Feb. 1909. Hermann Samuel participated as a frontline soldier in World War I from 1914 until 1918. Awarded the Iron Cross Second Class, he was also nominated for the Hanseatic Cross (Hanseatenkreuz). As a lawyer, he worked in a partnership with Robert Prudlo at Neuer Wall 6. From 1933/34 until Nov. 1938, he was an executive member of the German-Israelitic Community and of the Jewish Home Economics School (Jüdische Haushaltungsschule), newly established in Feb. 1934.

On 30 Nov. 1938, his license to practice as a lawyer was revoked. Probably in connection with the arrests following the night of the November Pogrom on 9 Nov. 1938, he was detained in the Sachsenhausen concentration camp for a short period. However, since he was preparing his emigration to Britain, he was released. The records of the customs investigation department and the Hamburg "purchasing point for valuables ("Ankaufsstelle für Wertsachen) dating from 1939/40 reveal that he initiated the steps required toward this end, disclosing his financial situation (valuables, properties). Hermann Samuels financial circumstances do not appear to have been particularly good, even though he owned properties at Steindamm 9 and Flüggestrasse 1/Kämmerer Ufer 5, and things became even bleaker after 1933. In 1935 and 1937, he earned no taxable income at all. He seems to have incurred debts, for the lawyers of a boatbuilding company asked the Chief Finance Administrator (Oberfinanzpräsident) to block approval of his emigration to Britain until he had paid his debts, amounting to 80 RM (reichsmark).

For a long time, he had lived with his parents. For instance, in 1939 he wrote on the occasion of listing his valuables that until their deaths, he "had lived in the happiest of common households [with his parents]. While he resided at Haynstrasse 21 initially, he subsequently moved to Isestrasse 69 and then to Husumer Strasse 10, his last address. There, he lived together with his colleague Heinz Braunschweiger and his parents (see corresponding entry). The reasons why Hermann Samuels emigration failed are not known, but by the time the general ban on Jewish emigration was issued in Oct. 1941, he was still residing in Hamburg. With the first deportation leaving the city on 25 Oct. 1941, he was deported to the Lodz Ghetto. There, he was assigned a room shared with six other persons on 6 Jan. 1942. He survived for nine more months, then dying of malnutrition according to the deregistration card issued by the "Eldest of the Jews ("Älteste der Juden). Hermann Samuel starved to death at the age of 61.

Two of his siblings, the sisters Ella and Melanie, were also deported, perishing in concentration camps at unknown points in time. They were declared officially dead as of 8 May 1945.

After the war, his sister Olga and his brother Alfred, who emigrated to the USA and took on the last name of Rostan, joined his nephew Oscar in initiating proceedings before the Hamburg Restitution Office (Amt für Wiedergutmachung) to obtain restitution for Hermann Samuels assets.