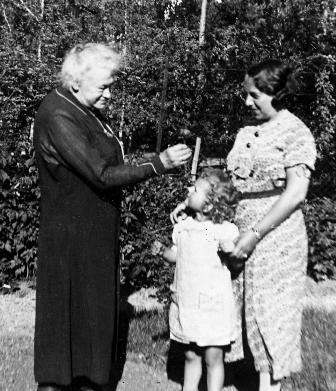 Ruth Hamburger came from Silesian Görlitz. Her father, Ernst Hamburger, was co-owner of an important industrial enterprise, the Wagner & Hamburger Machine Works. He died while Ruth was still a child. Her older brother, Fritz, fell in the First World War. Ruth grew up with his daughter, only a few years younger; her mother was not Jewish. Ruths second brother, Rudolph (Rudi), later married a Görlitz "Aryan.

Ruth and Rudis mother, Clara Zipora, née Meyer, married the Munich artist Paul Böhm, after the war. His sons caused a fuss in Görlitz because they "lived beyond their means." This second marriage soon failed; however, Clara did not drop the name Böhm. In 1930, she acquired a villa in Fürstenberg (Mecklenburg) and moved there with her daughter Ruth and granddaughter Eva. She established the pension "the House in the Sun," which was once frequented by the Jewish trade. Ruth worked with a doctor as a babys nurse. Other than Clara, Ruth, Eva, an elderly former piano teacher, and some pension guests, there were no longer any Jews in Fürstenberg. Even before 1914, the old community had ceased to exist because members gradually moved to the vicinity of Berlin or emigrated.

In autumn 1931, Ruth Hamburger took in an infant, abandoned by its parents, as a foster child. This child, today Edith Drenckhan, lives in Hamburg. It is to her and Evas niece that we owe the knowledge that, after proclamation of the Nuremberg Laws, a "great wave of antisemitism passed over Fürstenberg. The SA and other Nazi organizations marched past the pension, sometimes several times a week, singing aggressive Nazi songs.

Worse still was the fact that Ruth, after four years of intimacy with her "Aryan foster child, "Ditha, had to give her up. She did not, however, simply let them take her away but rather placed an advertisement in the magazine, "Daheim [At Home], looking for the best possible adoptive parents. "Of all the many letters that I received, yours was the most pleasing, she wrote on 24 November 1935 to the chartered engineer, Erich Heinemann in Altona-Gross Flottbek. She wrote further, "... after four years of care, in which I tried to give the soul of this child all the motherly love and understanding in my possession ... Yesterday, I had to give up the child because I am not Aryan ..." Ruth had apparently hit upon a good choice, for Erich Heinemann answered promptly: "It must be painful for you to be separated from the child. Be certain of my understanding and empathy. His wife, who was traveling, was not able to express her opinion, but he added: "I will write to her immediately , for I put great value on avoiding a confiscation of the child by the other side. After the vote of confidence, if I may be permitted to see your letter in that way, I can scarcely believe that our request will fail, when I ask for a certain preference for my wife and myself. Ditha became Edith Einemann, who later married Werner Drenckhan and who today safeguards this precious letter, from which we have quoted.

The horrors of 1935 did not end. When in 1938, the building of a concentration camp for women began in the Ravensbrück district of the town, just twenty minutes by foot from the "House in the Sun, Mayor Hans Krieg pronounced upon the theme of tourism before the Fürstenberg City Council: "Certainly without Jews! ... our entire work  after the taking of power (would) be in vainif the Jews were not kept out of Fürstenberg. When we first became known, correctly, as a Jew resort, we then became unpopular and things went bad economically  That was the time that all inhabitants could see the catastrophe setting in right before their eyes. Clara Böhm could do nothing other than sell the pension. She busied herself intensively with emigration to America. On 11 November, Ruths 32nd birthday, the SA stormed the villa wreaking havoc. As the mob began carrying off the furniture, it was stopped by the information that the House had been "Aryanized. Then, the unbelievable happened: the city removed the damaged furnishings and bore the costs.

In January 1939, the flight to Hamburg succeeded; Ruths brother Rudie was already there since 1933. In May 1939, Clara and Eva were listed in the census at Abendrothsweg 19, on the second floor left. For 1940, we also have a certain trace of Ruth: the Jewish Congregation held fast. Ruth had meanwhile married Ernst Weigert and lived "with Böhm, that is, her mother. Edith Drenckhan remembers having seen her foster mother there in 1940 for one last time. Under Ernst Weigerts name is found the abbreviation "jüd [Jewish], after Ruths name stands "gt, gottgläubig [believer in God]. The niece, Eva, reported later that her husband was still able to emigrate to America.

Eyewitnesses from Görlitz at that time thought that women had succeeded in emigrating to Switzerland. In fact, they were seized at the border and sent back.

Ruths name stood on two deportation lists, the first for 6 December 1941 (Riga), as she was attempting to flee to Switzerland. Later we find her name on the list of those who were sent to Auschwitz on 11 July 1942. The congregation file card for her notes accordingly "7/11 42 emigration. Prior to this she was in "protective custody in the Fuhlsbüttel concentration camp. In 1942, an officer of the court instituted an auction of the paltry remains of the estate.

The auction took place in March 1943. It consisted of five trunks of used and repaired clothing, aluminum pots, a few books, a ladys ring, and mans watch, etc. The cashier of the Office of the Chief Financial Governor listed 112 RM for the lot.

While Eva and Rudi survived the time of persecution, Clara Böhm was deported and murdered. Eva emigrated in the 1950s to Canada and married an Englishman there, Foley. Rudi remained in Hamburg.